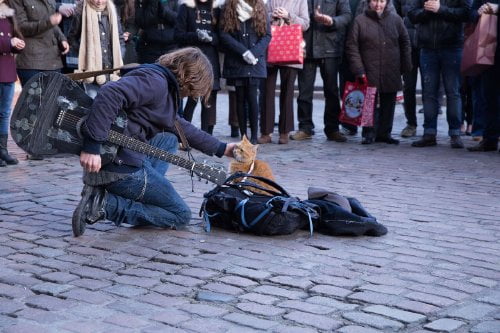 James Bowen (Luke Treadway) is a drug addict and street musician trying to eke out an existence in London. His life seems hopeless when he hears a noise in his apartment late one night. But, it is not an intruder with violent intent. It is a big ginger Tom cat pilfering James’s box of cereal. This is the beginning of a beautiful friendship for “A Street Cat Named Bob.”

Eclectic film director Roger Spottiswoode (check out his filmography) chooses an offbeat little true life tale as his latest work and it is a charmer. Jamie really wants to get off the junk and, with the help of social worker Val (Joanne Froggatt), gets an apartment and into a program. But, it is still a hard struggle for the addict. Then, Bob comes along. Jamie feeds the ginger stray and wanders the neighborhood looking for Bob’s owner but without luck. Bob disappears only to come back, later, injured. The compassionate Jamie takes his ward to the vet where he meets pretty Betty (Ruta Gedmintas), who psychically connects with the feline. Jamie becomes Bob’s human and soul mate and the pair begins Jamie’s recovery and redemption. The result became an international best seller. While the humans in “A Street Cat Named Bob” do a fine job in their roles, the star of the film is….(drum roll) Bob. Stand in cats were tested for the role of Bob, but the filmmakers found their star right under their noses. The choice to cast Bob as Bob turns out to be inspired. Unfortunately for his human costars, Bob steals every scene he is in. He is a natural talent.