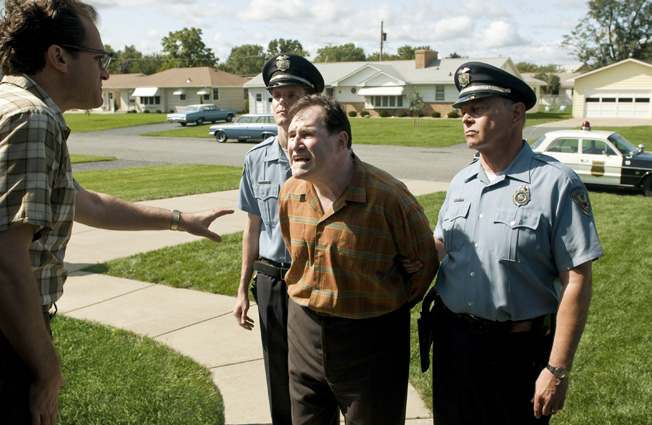 It's 1967 in the American Midwest when physics professor Larry Gopnick's wife leaves him for an insufferable colleague, his troublesome brother Arthur (Richard Kind, TV's "Spin City," "The Visitor") moves onto his couch, his son Danny (Aaron Wolff) becomes problematic at school, his daughter Sarah (Jessica McManus) steals money from his wallet to save for a nose job and someone has started a letter writing campaign to deep-six Larry's opportunity for tenure. With the whole world against him, Larry (Michael Stuhlbarg, Tony nominated for "The Pillowman") turns to three different rabbis to learn how to become accepted as "A Serious Man."

Once again, the Coen brothers prove themselves two of the most eclectic filmmakers in America today. “A Serious Man” is about as far removed from, say, “No Country for Old Men” as can be. It is not as wacky as “Burn After Reading” but is certainly the brothers' cut on the Minnesota Jewish experience. It is 1967 and Larry Gopnik (Michael Stuhlbarg) is in for a world of hurt. His very troubled brother, Arthur (Richard Kind), has moved in and shows no signs of leaving the one-bathroom home. His wife, Judith, decides that she wants a ritual Jewish divorce, a get, so she can marry Sy Ableman (Fred Melamed), one of Larry’s colleagues. Son Danny (Aaron Wolff) is smoking pot and being hounded by his dealer for owing him money. Daughter Sarah is concerned with two things: washing her hair and stealing enough money from Larry’s wallet to get a nose job. Life is none too good, at least for Larry, in the Gopnik home but things get worse when a Korean scholarship student, Clive Park (David Kang), tries to bribe the mathematics professor for a passing grade and, failing that, threatens to sue him for defamation of character. Anonymous letters, accusing Larry of moral turpitude, begin to show up at the school’s tenure commission and Larry chance of a permanent job at the college may be in jeopardy. In addition, he is drowning in a sea of legal debt, what with the divorce, a lawsuit and a redneck neighbor encroaching onto his property. All of these disasters are tightly and relentlessly weaved together by the Coens and the result is a very funny, satiric look into that particular Jewish community from the brothers’ creative minds. The ever-present Rabbis are there to comfort and advise their flock, but, then again, maybe not. The gags are all over the place and far too many to list. Let us just say that some will find “A Serious Man” hilarious and others will be offended. Hilarity and satiric wit win me over, though.