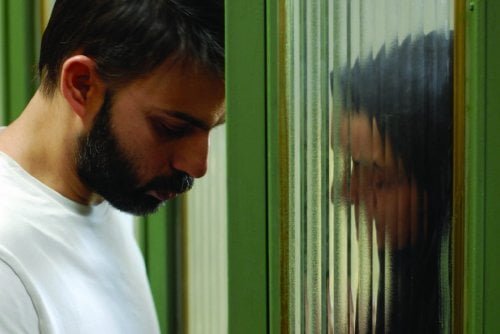 Nader (Peyman Moadi) and Simin (Leila Hatami) are having marriage problems. She wants them, and their daughter Termeh (Sarina Farhadi), to leave Iran and find a better life. He refuses to leave because of his Alzheimer’s suffering father (Ali-Asghar Shahbazi) and Simin sues for divorce and custody of Termeh in “A Separation.”

Simin (Leila Hatami) faces us directly. She is petitioning for divorce so that she doesn't have to bring up her 11 year-old daughter Termeh (the director's daughter, Sarina Farhadi) in Iran, or, as she tells the judge, 'under these circumstances.' Nader (Peyman Moadi, "About Elly") tells us he does not wish to leave Iran because he is caring for his Alzheimer's afflicted father (Ali-Asghar Shahbazi), nor does he wish to give up custody of his daughter. These emotionally charged family issues are only the tip of the iceberg in what will be revealed by "A Separation." Writer/director Asghar Farhadi ("About Elly"), who just won Foreign Language and Original Screenplay Oscar nominations for his film, has made a rather unique Iranian movie, one which both subtly criticizes the constraints, both political and religious, under which Iranian people must manage their lives and one which may open Western minds about life in modern day Tehran. Along with Maryam Keshavarz's "Circumstance" from earlier this year and Bahman Ghobadi's "No One Knows About Persian Cats," Farhadi's film may be paving the road to a more current Iranian cinema, one with a more modern viewpoint than the children's fables of Majid Majidi, Jafar Panahi's tales of oppression and the poetic allegory of Abbas Kiarostami. Simin's bluff fails, so she retreats to her parents' home and even here Farhadi injects a critical note when the piano movers insist that although she lives on the second floor, the lobby must be counted and she owes for 3 flights, not the 2 which she has paid for. Nader, with whom Termeh has chosen to stay, has more serious problems, needing to find affordable care for his father while his daughter is at school. He finds Hodjat (Shahab Hosseini, "About Elly"), but the man is taken into custody for debt before he can even work a day(!). Surreptitiously, Hodjat's wife, Razieh (Sareh Bayat), seeks the job, begging that Nader not tell her husband. She brings along her young daughter and is left with too much to handle - when the old man wets himself, she must call for religious counsel. Things reach a boiling point when Nader and Termeh return home to find their elder shackled to his bed and his caretaker missing. When she returns, her pitiable excuses are no match for Nader's righteous rage. There is a scuffle on the landing. A hospital visit is followed by charges of murder and Termeh begins to examine statements by adults she would have formerly accepted without question, including testimony by her teacher Miss Ghahraii (Merila Zare'i, "About Elly"). This familial struggle which seemingly keeps courting a court of law keeps shifting on the slightest of misinterpretations, white lies and bet hedging. Farhadi's written a deft and intricate screenplay, one whose ending have some crying foul. But that unanswered questions leaves the door open for audience debate. A second act fact not revealed until the third shows Hollywood influence, a twist of Twilight Zone irony which works because it's based on Iranian character. If anything, what is lacking is more of an indicator on just how much love - if any - remains between Simin and Nader. There is the intimation that Simin's desire that her daughter escape political repression is the sole reason she wishes to leave, as Simin herself appears quite independent despite the demands of eldercare her marriage places upon her. The film is very minimalist, very clean, in its production design. Most action takes place within institutional spaces or Nader's apartment. Even exterior scenes produce a sense of claustrophobia given the panic which inspires their characters to head for the streets. Yet the shooting is dynamic, moving throughout Nader's apartment, looking through curtains and doorways and textured glass. "A Separation" is a modern day Iranian family drama which comments on politics, religion, class and even the generation gap. For all the stifled truths of its characters, Farhadi's film feels like a gust of brisk air.