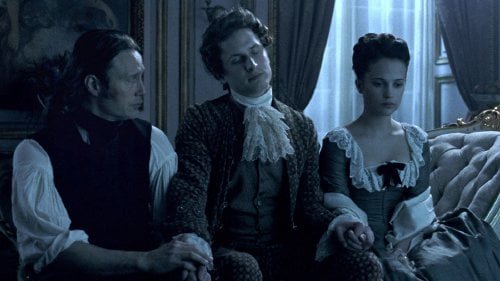 In 1766, King Christian VII of Denmark (Mikkel Boe Folsgaard) took on a wife – British aristocrat Caroline Mathilde (Alicia Vikander). After she becomes pregnant with the king’s child and he reverts to his old debauch ways, the arrival of an Enlightened German doctor, Johann Friedrich Struensee (Mads Mikkelson), will change the kingdom forever in “A Royal Affair.”

In 1766 England, the daughter of the Prince of Wales, Princess Caroline Mathilde (Alicia Vikander), left her home to marry her cousin, Denmark's King Christian VII (Berlin's Best Actor Mikkel Boe Følsgaard). She was astonished to learn that many of her books were banned from the Danish court and that her new husband wasn't quite right in the head. Christian was made to hire personal physician, German Dr. Johann Friedrich Struensee (Mads Mikkelsen, "Casino Royale," "Valhalla Rising"), and the two quickly became friends, but when the Queen learned Struensee was a devotee of banned authors Rousseau and Voltaire, the two quietly began to work through Christian to bring Denmark into the Age of Enlightenment while embarking on "A Royal Affair." Denmark's submission for the Foreign Language Film Oscar is a sweeping historical/romantic epic, a complex tale made thoroughly entertaining by cowriter (with his 2009 "The Girl with the Dragon Tattoo" partner Rasmus Heisterberg)/director Nikolaj Arcel. In fact, Arcel's film bears some resemblance to the 1977 "The Man in the Iron Mask," with its grateful queen blossoming under a compassionate pretender to the throne. But this one doesn't have a happy ending and court council member Ove Høegh-Guldberg's (David Dencik, "Tinker Tailor Soldier Spy," "War Horse") machinations with the King's stepmother Juliane Marie (Trine Dyrholm, "In a Better World"), looking to benefit her own son, might remind some of America's current political climate. This true life tale, very well known in its home country, is a fascinating bit of history. Who knew just how modern thinking the Danish court became in the late 1700's (only to be blasted back to medieval times and kept there behind their European brethren)? After her rather horrifying introduction to the Danish court, in which she was insulted by her crazy new husband in public then subjected to his marital bed, Caroline becomes more and more reclusive. Even her 'new' lady-in-waiting Louise von Plessen (Laura Bro, "Brothers"), her only friend, is banished by the King. His council, led by J. H. E. Bernstoff (Bent Mejding, "Italian for Beginners"), uses him as a puppet. But everything changes when Schack Carl Rantzau (Thomas W. Gabrielsson) and Enevold Brandt (Cyron Bjørn Melville, "No Man's Land"), no longer favored at court, propel their friend Struensee into the spotlight. Struensee clearly had the right psychological skills to gain the King's trust and open him to new ideas. Using the royal's love of Shakespeare and the stage, the doctor encourages him to 'act' to his own council, introducing measures like better hygiene to reduce Copenhagen's odors and vaccinations for all against rampant disease. Yet when the Queen bore a second child many thought fathered by Struensee, the public could be inflamed via scandalous flyers to rout their very champions. It's a tragic tale. The film looks stunning, all pastel gowns, lush green countryside, bluish-gray palaces and opulent royal beds. Alicia Vikander is perhaps lovelier than her real life counterpart (and while the script allows her to ride a horse astride, it abandons her predilection for dressing in men's clothing), but her flawless skin and rosy cheeks speak of both English roses and Danish purity. Vikander doesn't play loudly, letting excitement, confusion, curiosity and lust burble beneath the surface. And while Mads Mikkelsen has become an international star and has the sexier role here, it is Mikkel Boe Følsgaard who really astonishes, always keeping us wondering if the King's madness is real or, at least in part, a tactic. For his part, Mikkelsen is a bit earnest as the high-minded doctor, yet we can see his pleasure in play with the King and his conflicted desire for the queen. "A Royal Affair" is a historical drama of the likes rarely made anymore. This beautiful production is entertaining, engrossing and yes, enlightening.