A Report on the Party and the Guests 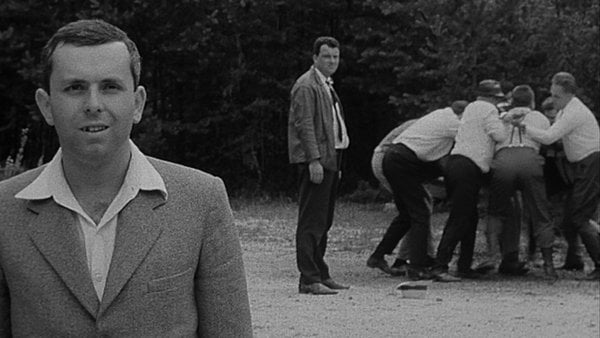 A group of friends picnic in a field. They spy a lively procession and try to get the other group's attention but it passes on by. As they make their way down a path, they're confronted by a group of suits who set up a desk for Rudolf (Jan Klusák) who begins to question the group, herded together within a line drawn in the dirt. After Karel (Karel Mares) is roughed up, Manzel (Evald Schorm) breaks free just as a gentleman in a white suit (Ivan Vyskocil) comes to berate Rudolf for 'horsing around' in cowriter (with Ester Krumbachová, "Daisies")/director Jan Nemec's "A Report on the Party and the Guests."

This political parable from 1966 was banned in the Czech Republic and it's easy to see why. Nemec makes a strong statement about how people are led like sheep by authoritarian figures, whether they be tyrannical or paternal. The black and white film begins playfully before turning into something that feels like an outdoor home invasion, interrogator Rudolf's smile more threatening than his queries. Once the host, all calming and complimenting, arrives, we feel like we've entered an Eastern European Buñuel film. The group is led to a lake where elaborately set banquet tables await - the other party, a wedding, has already arrived and we're told that it is being celebrated along with the host's birthday. Manzel's wife is upset that he is missing an 'opportunity,' and when she notices she's sitting at the wrong place setting, an amusing mass musical chairs beings. This chaos upsets the formerly genial host, who doesn't understand why there isn't an empty chair if one of his guests is missing. Rudolf asks permission to go and find him and asks for volunteers. He takes a dog - a German Shepherd - along to 'help' while a friend of Manzel's, puffed up at being called an intellectual and allowed to make a speech on Manzel's behalf, glady accepts a rifle. Nemec's film is short and to the point, its satire barely disguised as absurdity. "A Report on the Party and the Guests" is an entertaining and economical call to arms.