A Rainy Day in New York 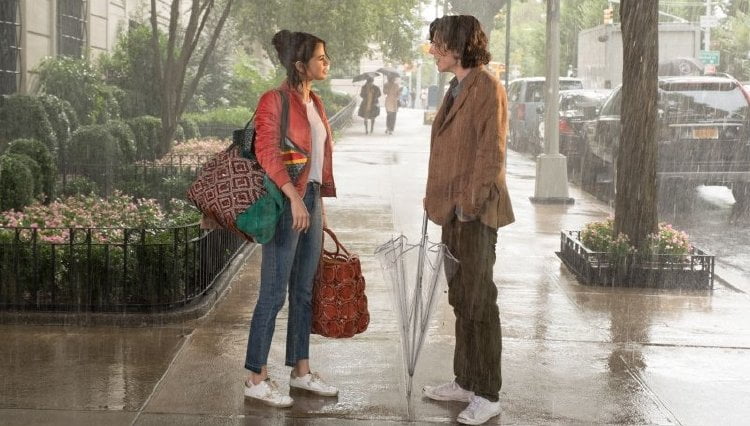 Writer/director Woody Allen’s 49th film was shelved by Amazon Studios after he was caught up in renewed #MeToo furor (I recommend reading Robert Weide and Moses Farrow for an honest summary of the controversy).  It opened in Europe to so-so reviews but is now coming out via MPI Media and I am delighted to report that, while flawed, it is much better than I had anticipated.  As the Tucson native swept behind the red velvet ropes of New York’s movie biz, Elle Fanning is simply a delight, Woody having procured another note perfect female comedic performance.

Let’s get the main problem out of the way and that is the inconsistent tone of Allen’s writing, which is an odd mix of classic Allen shtick (‘I took her to her first crap game’), dated Vaudeville (a ‘sexually conflicted’ hiccup gag which Fanning nonetheless manages to pull off), present day tone deafness (who in 2020 would regard a Tucson native as a hick who could only win a beauty contest in a 4H club?) and witty barbs (Gatsby’s description of his mother’s social circle as ‘a farrago of Wasp Plutocrats’).  The unfortunate moniker of his protagonist – Gatsby Welles – doesn’t even make sense as Gatsby is more Holden Caulfield as Allen alter ego.  Fortunately for us, Allen finds an exquisite landing, a beautifully written conversation between Gatsby and his mom (a masterful Cherry Jones).

Until that conversation, Gatsby’s storyline is actually the less interesting of the two.  He mopes about New York, consistently getting put off by Ashleigh as the hour slotted for her interview turns into a privileged insider’s adventure with famous filmmakers and a dashing movie star (Diego Luna).  Running into an old friend making a short film, he’s corralled into a dialogue free part that finds him kissing the kid sister of his ex who turns out to be a tart-tongued challenge.  He’ll also partake of a high stakes poker game (the trip is financed by a 20K poker haul) that will fund the high class call girl (Kelly Rohrbach, 2017's "Baywatch") he eventually tries to pass off as his girlfriend at the fancy shindig his mother’s throwing he’d tried to avoid attending.

Meanwhile the starstruck Ashleigh finds herself becoming a muse to a depressed yet legendary director, then hooking up with screenwriter Ted Davidoff (Jude Law) to find him when Pollard goes missing.  This hunt leads her into the arms of Francisco Vega (Luna) who’s looking for a dalliance while his live-in lover Tiffany (Suki Waterhouse) is away.  Every famous man she meets seems to fall in love with her, her corn fed sex appeal and starry eyed idolization an irresistible mix.

While Chalamet isn’t a great Allen stand-in, he’s certainly not the worst, his tweed jacketed, sneaker shod, old piano standard loving romantic believable in Allen’s particular New York.  We’re treated to many famous hotels and their watering holes as Ashleigh can’t seem to remember which famous hotel they’ve checked into, Gatsby’s favorite, the Carlyle, having been deemed too close to his mother.  Asked by Chan to choose his ideal meeting place, Gatsby picks the Delacorte Clock, a musical animal clock on a brick archway in Central Park that proves a charming spot for the film’s finale.

But there is no denying the film belongs to Fanning, even as she’s sent packing back to the fictional Yardley College.  Also featured are Rebecca Hall in a single scene, Will Rogers as Gatsby’s Waspy brother Hunter and Annaleigh Ashford as Hunter’s fiancée, whose braying laugh is a tossed off punch line.

Ashleigh (Elle Fanning) is a budding reporter for the Yardley College school newspaper when gets a plum assignment: go to Manhattan and interview famous Hollywood director Roland Pollard (Liev Schreiber). Her boyfriend, Gatsby (Timothee Chalamet), decides to go along with her and, once the hour long interview is dome, plans a romantic day in the city. At least, that’s the plan for “A Rainy Day in New York.”

Woody Allen goes back to his beloved New York City and, once again, puts a surrogate of Woody front and center, Timothy Chalamet, with all of the director’s nervous ticks and witty repartee. Elle Fanning, though, is adorable as the innocent, and innocently sexy, Ashleigh and playing well off her several male costars – Chalamet, Schreiber, Roland’s manager Ted (Jude Law) facing a marriage crisis and a sexy movie star, Francesco Vega (Diego Luna) – who all see her as an object of desire, in various ways.

The story is a pastiche of scenes as it gives time, in more or less equal measure, to both Ashleigh and Gatsby as they part ways with the best of intentions to have a romantic day – mapped out in painstaking detail by Gatsby. But, fate keeps the couple apart as each experience life-changing events, all in the course of hours.

Usually, a large ensemble cast gifts fair shrift to all the players. Here, though, the decks are stacked in favor of Elle Fanning’s Laura. She is, as I said, the innocent but far wiser than the four men who pursue her. As such, Laura is a fully developed character who is ambitious, kind and loving. The guys, on the other hand, are all needy, in one way or another, of love and each sees her as his emotional salvation.

Woody Allen films tend to be ranked as Great, Good, So-so and Bad (with few in the latter category). But, I would put “A Rainy Day…” as somewhere between Good and So-so. I like it but will it stick with me? I do not think so.