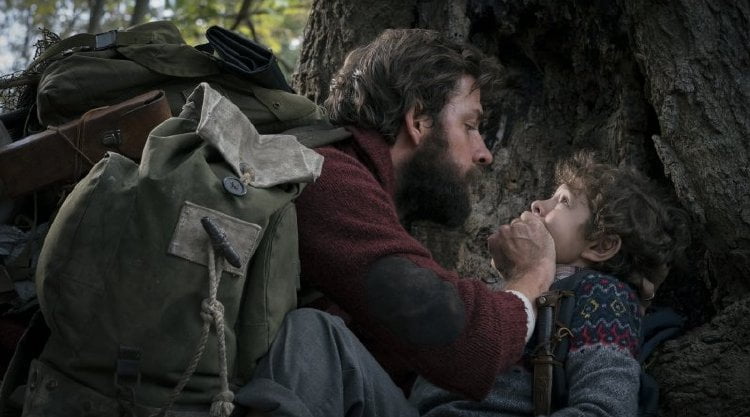 Lee (John Krasinski) and Evelyn Abbott (Emily Blunt) are raising a deaf daughter and two younger boys in a world where terrifying creatures kill everything they can find hunting by sound. With another child on the way, the Abbotts have restructured their family life into "A Quiet Place."

And that aspect of the film, the sound muffling, colored light communication, video monitoring and noise baiting systems, is one of the continuing pleasures of John Krasinski's ("The Hollars") tense, beautifully crafted and acted third film. This is a family that breaks bread soundlessly, food served on edible leaves to avoid the rattling of dishes and silverware. The father studies books on the human ear in an attempt to fashion a hearing aid for Regan (Millicent Simmonds, "Wonderstruck") and takes his terrified middle child Marcus (Noah Jupe, "Suburbicon") to teach him how to trap while also offering the simple joy of screaming behind a waterfall. Floorboards and stairs are marked to avoid creaking wood, pathways routinely covered in sand to soften bare footsteps. Even the family's Monopoly game pieces have been replaced with fabric badges.

Krasinski added many of these elements to Bryan Woods and Scott Beck's screenplay, but it was the impending birth of his second child with wife and costar Blunt which led to his enthusiasm for this tale of parents with an almost insurmountable task of keeping their children safe. 'If we can't protect them, who are we?' Evelyn signs to Lee at one point, the family well versed in American Sign Language. We can feel the deep love between Krasinski and Blunt's characters, a dance to Neil Young's 'Harvest Moon' via shared ear buds a deep communion, but it is Lee's complicated relationship with his daughter which gives the film its emotional core.

The family we first meet is on a foraging expedition in what remains of their rural town center, a scene straight out of 'The Walking Dead' but for their bare feet. As Evelyn (and I use these names for clarity's sake as they are not used in the film itself) chooses medication for an ailing Marcus, their youngest, Beau (Cade Woodward), is taken by a toy NASA shuttle. 'Too loud' signs Lee, taking the toy away from the child and removing its batteries. But Regan, noting her brother's crestfallen face, slips it to him with a finger to her lips. She doesn't see him pocket the batteries. As they troop out of the store, an old newspaper flutters in the breeze, its headline 'It's Sound!' Anyone who has seen the trailer knows what is coming.

The evening of their 472nd day surviving in these conditions is muted until Marcus knocks over a kerosene lamp, igniting the carpet. Lee, his eyes huge, springs into action and snuffs out the flames. Then they hear scrambling on the roof. 'I'm sorry,' Marcus mouths to his father. It turns out to be a false alarm, but the raccoons who've inadvertently terrified a family are not so lucky when they scurry into the cornfields.

It is day 473 when the family splits apart that they face their most horrific challenges. Lee insists Marcus must learn how to provide although the boy is clearly panic stricken at the idea of leaving the relative safety of the farm. Regan, having just firmly refused to try her dad's latest update to her hearing aid, is furious she is not allowed to go. Told to stay and help her mother, Regan instead sets off on her own mission. Evelyn sits in Beau's old bedroom, then tends to laundry, but the bag that catches on the stairs pulls up a nail. Then her water breaks.

Krasinski has had an odd filmography, his first effort a little seen adaption of David Foster Wallace's 'Brief Interviews with Hideous Men,' his second a cliche-ridden family comedy, but he's really found his footing here, his direction flawless. The production, shot on location in New York's Duchess County, is meticulously realized and while aspects of the story recall other works (the aforementioned 'Walking Dead,' "Signs," "Breathe In" to name a few), it is entirely its own thing. Danish cinematographer Charlotte Bruus Christensen ("The Hunt") finds fear in the dark just beyond a flashlight's reach, but also brings warmth in the golden glow which surrounds the Abbotts at rest. In one beautiful shot, she places Regan's reflected image beyond Lee's shoulder, the image encapsulating the relationship. Christopher Tellefsen's ("Moneyball") cutting is perfection. Marco Beltrami's ("First They Killed My Father") subtle score leans more towards embracing this family than playing up the film's scares. The aliens themselves, seen fleetingly at first, are revealed as some kind of cross between "Alien" and "Predator," all ears and teeth (the visual effects team based their design on a nautilus shell).

"A Quiet Place" works so well because Krasinski and his cast make us care about these people. He and Blunt both do exceptional work but so do the child actors. Jupe expresses true, palpable terror while Simmonds continues to impress with an expressiveness beyond her years. This isn't just a solid genre film, but something so much more. Grade: