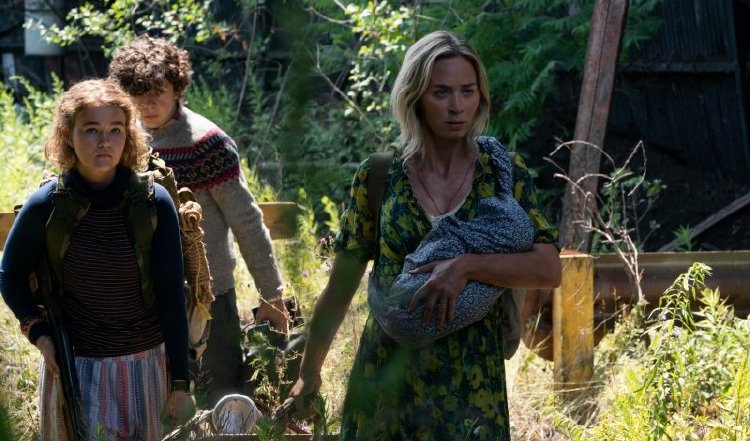 When we last saw the Abbott family as they wrestled with alien invaders drawn to the smallest sound, it was Day 473 since the invasion.  Now, cowriter (with "A Quiet Place's" Scott Beck & Bryan Woods)/director John Krasinski takes us back to Day 1 before advancing to Day 474 in “A Quiet Place II.”

Krasinski really surprised with his directing prowess his third time behind the camera and he continues to do the same with his technically assured sequel, even if, this time, the narrative is a little spottier.  So much of what made the first film work was the innovative ways Lee (John Krasinski) and Evelyn Abbott (Emily Blunt) had found to soundproof their daily life and now, with Evelyn and her brood on the move, routines come less into play (with the exception of the brilliant solution for baby crying), so it was smart to start the sequel before those routines became necessity.

Krasinski even fakes us out at the onset, his Lee character driving into a deserted town center, entering a store whose owner is glued to a breaking news report of devastation in China.  But the town’s emptiness is what happens when everyone from the area is at the local baseball field, which is where Lee heads to meet up with the family and watch Marcus (Noah Jupe) play.  It’s a happy gathering, but when a strike is called on the boy, it’s because he’s distracted by the fireball streaming across the sky, clearly an unprecedented event.  Everyone heads for their vehicles, but pandemonium ensues as giant creatures begin assaulting the town.  This is one hell of an opener.  It also reestablishes the deep bonds among the Abbott family, especially between Lee and brilliant deaf daughter Regan (the terrific Millicent Simmonds).

If the first film was rooted in that relationship, this one gives a new character, Cillian Murphy’s Emmett, a redemptive arc under Regan’s influence.  We see him in the stands on Day 1 and Lee clearly knows him, but over a year later he’s lost his entire family and is distrustful of everyone (if the original movie bore traces of ‘The Walking Dead,’ this one amplifies comparisons in both production design and post-apocalyptic human behavior).  Using her dad’s fire tower, Regan’s plotted out a map for the family to try and find other people, a map which leads them to the old steel mill where Emmett has holed up.  He’s also set up booby traps, which both draw the creatures and seriously injure Marcus.  Emmett saves them from his own system, then insists he cannot help them and they must leave, but Evelyn stands her ground, forcing his humanity to the forefront.

Emmett’s main source of protection is a blast furnace, its door kept from locking the occupant in by a towel, available air measured with a digital watch alarm.  Three feet of concrete overhead provide noise insulation.  The Abbotts have also come equipped with a portable amplifier to blast aliens with feedback before picking them off with rifle fire.  While trying to distract Marcus from his pain with Emmett’s portable radio, Regan falls upon an actual broadcast, a station playing ‘Beyond the Sea’ on repeat, a song selection she believes provides a message.

Krasinski will split his cast among three separate adventures with differing dangers, all expertly crosscut by editor Michael P. Shawver ("Black Panther") who uses an air/fire/water dynamic to link them.  Sound is also expertly mixed, Regan’s lack of hearing used for blasts of silence which render ensuing noise all the more alarming.  Regan and Emmett’s story is the meatiest and most dramatic, but also the most problematic in terms of logic.  (It also introduces additional new characters played by Scoot McNairy and Djimon Hounsou.)  The fact that Krasinski does not reunite all three of these story strands at film’s end leaves a big opening for “A Quiet Place III,” which will be more than welcome but he’d better act fast – Simmonds and Jupe have already grown noticeably between Day 473 and 474.

The Abbott family has lived in daily fear of the vicious blind alien creatures that hunt by sound and devastated mankind. Now, though, they come to the shocking realization that the malevolent monsters are not the only danger lurking in “A Quiet Place II.”

I know I saw the original, “A Quiet Place (2018),” the year it came out, but not the day it came out. This makes a big difference as I saw that film during the year’s end when I was catching up on the movies I had not seen during 2018. As such, it was one of about 20 or so films I watched in about two or three weeks. Most are a blur, including the original, so I went to my best source, Laura, and read her review of Part one. I am glad I did.

John Krasinski’s fourth round behind the camera takes his storytelling experience from his original man vs. monster flick and carries the tale forward. Things pick up just where they left off - except for a brief Day-1 prologue in the beginning of Part II that sets the stage of the origin of the coming of the creatures.

Day 474 dawns at the story of continues with Evelyn (Emily Blunt), daughter Regan (Millicent Simmonds), son Marcus (Noah Jupe) and the new-born baby continue their battle for survival. With the lessons they learned in Part 1, even without their late dad, Lee (John Krasinski), they can fight back against the deadly creatures – with sound!

A chance of hope comes along when Marcus, grievously injured by a bear trap (you will have to see the movie to see that crisis play out), hears, on the radio where, before, it was just static noise, now, Bobby Darrin’s “Beyond the Sea,” (a favorite of mine) plays loud and clear. This glimmer of hope is what sparks the bulk of the story – that and keeping clear of real nasty monsters.

Krasinski, who penned the script with the characters created by Scott Beck and Bryan Woods, uses a good amount of fake outs and jump at you from the dark shocks to push the narrative along. As if it is not enough of a problem that the Abbott family has to survive incredible odds, they also have to, in a short sequence, survive a group of feral humans standing in their way to finding refuge from the monsters. Why do some humans, in sci-fi post-apocalyptic disaster flicks, always seem to turn feral?

I could pick at the little things that bother me about “A Quiet Place II,” but in the end, I got a pretty good monster story that was a load of fun, in a scary way