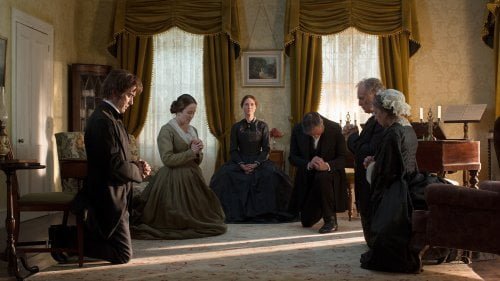 Poet Emily Dickinson (Cynthia Nixon) was a talent far ahead of her time in Victorian England. Her writing would become world renown after her death but, before that, she struggled to make her literary voice heard in “A Quiet Passion.”

After leaving Mount Holyoke because of an 'acute case of evangelism,' Emily Dickinson (Cynthia Nixon) returned to that which she cherished most, her family in Amherst, Massachusetts. While she tussled with her father Edward (Keith Carradine, "Nashville") over religious authoritarianism, preferring private observance, her witty rebelliousness was mostly indulged. But although about a dozen of her poems were published, Emily rarely received the approval she so yearned for and the romantic became a recluse, her own assessment of her plain appearance keeping her from potential suitors of the woman with "A Quiet Passion." You don't have to be a fan of poetry to fall in love with writer/director Terence Davies' ("The House of Mirth," "Sunset Song") extraordinary evocation of Emily Dickinson. If at first Cynthia Nixon appears too old for the role (she's played through her school years by Emma Bell), the fifty year-old actress, who plays Dickinson from her early twenties through her death at fifty-five, quickly dispels any misgivings with her transcendent performance. Davies' screenplay is a marvel of wit and compassion, revealing humor and tragedy in the life of a woman few knew. While some of his story is invented (Dickinson never met her brother's mistress, Mabel Loomis Tod (Noémie Schellens), for example), Davies mostly hews to known facts, distilling the essence of an eccentric artist. After scandalizing her Aunt Elizabeth (Annette Badland, "Little Voice") to the family's amusement, Emily bids her a genuinely fond farewell, a perfect example of the poetess's warring impulses. Her first poem is published in the Springfield Register. Davies then uses a formal photographic portrait sitting to advance time, Carradine dissolving into Carradine in age makeup while the three actors who portray his young children are replaced with those cast as the adult iterations ("Wild Target's" Duncan Duff as Austin, Jennifer Ehle ("Contagion," "Little Men") as youngest daughter Lavinia 'Vinnie' Dickinson). Emily holds friendship dearly, seeing the marriage of female friends as a form of death, a subject with which she was obsessed. Her sister (played by Ehle as a radiant optimist and moral compass, the light to Emily's dark) is her closest ally, but she also immediately embraces Susan Gilbert (Jodhi May, "Defiance"), Austin's new wife. Miss Vryling Buffam (Catherine Bailey, TV's 'Eastenders,' in a breakout performance) matches Emily in wit, if not unconventionality. She idolizes her mother Emily (Joanna Bacon, "Love Actually"), who Davies suggests may have suffered from depression, another reclusive Dickinson. Emily was attracted to Reverend Wadsworth (Eric Loren, "The Fourth Kind"), whom the sisters invite for an awkward tea (Wadsworth's wife (Simone Milsdochter) is a bit of a pill). When Emily later condemns Austin for his affair with Mabel Tod (the woman who, ironically, would work to publish Emily's work after her death), it is Vinnie who gently points out her hypocrisy. The film addresses the horrors of the Civil War affecting those far away in Amherst, Emily putting pen to paper to reflect (Nixon narrates the poems beautifully). But what we come away with most is a woman in constant battle with herself, often freezing abruptly in self doubt and self realization. Nixon haunts in the role, both emotionally and physically, her portray of the debilitating effects of Bright's Disease chillingly realistic, the toll of facing the deaths of those she held close equally crippling. Grade: