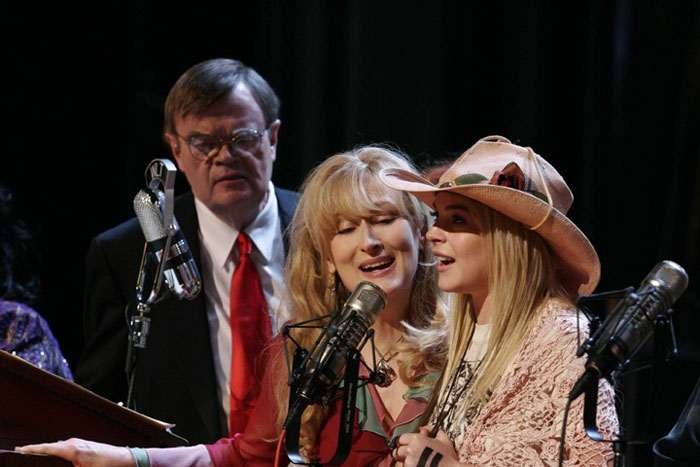 For over thirty years, a band of MidWestern performers have gathered every Saturday night at the Fitzgerald Theater in St. Paul to broadcast a live variety music show on local station WNT. As the theater audience files in on a rainy night, word begins to spread among cast and crew that their station has been sold and that tonight's performance would be the last for "A Prairie Home Companion."

Long time writer and radio personality Garrison Keillor, whose titular show still carries on on over 550 public radio stations, has blended fact and fiction in collaboration with director Robert Altman ("Gosford Park," "The Company") to present a cinematic version of his homespun style of Minnesotan entertainment. Altman's sensibilities are perfect for the medium and he's drawn a top notch cast that seamlessly intermingles with "Prairie Home's" own. The story is introduced by a recurring "Prairie Home" character, Guy Noir (Kevin Kline, "De-Lovely," "The Pink Panther"), who explains how he has become the radio show's security man - in short, there aren't enough slain socialites in conservatories in conservatories for the private eye to make a living anymore. The theater he enters is a beehive of activity and gossip about the impending fate of the old-fashioned show. Yolanda (Meryl Streep, "Prime," "Lemony Snicket's A Series of Unfortunate Events") and Rhonda Johnson (Lily Tomlin, "I Heart Huckabees"), the two remaining members of a sister quartet, pepper their overstuffed dressing room with reminiscences for the benefit of Yolanda's teenaged daughter Lola (Lindsay Lohan, "Just My Luck"), who is visiting the show for the first time on its last night. Lola's paternity is cloaked within one of the hundreds of tall tales told by emcee Keillor, who once had a romance with Yolanda that she is intent on making him pay for tonight. He's also in the cross hairs of Molly (Saturday Night Live's Maya Rudolph), the very pregnant stage manager who is provoked by his laid back attitude about live time schedules. Dusty (Woody Harrelson, "The Prize Winner of Defiance, Ohio," "North Country") and Lefty (John C. Reilly, "Criminal," "Dark Water") comment upon their colleagues from within the realm of their hoary but hilarious singing cowpoke act while older country star Chuck Akers (L.Q. Jones, TNT's "The Jack Bull") indulges in senior sexual frolics with Evelyn, the Lunch Lady (Marylouise Burke, "Sideways," "Must Love Dogs"). Wandering amongst them all is a stranger, an angelic woman in a white trench coat (Virginia Madsen, "Sideways," "Firewall") who has Guy in a lather but whose purpose is lethal. Keillor's done a great job juxtaposing the charms of his quirky radio show with the backstage characterizations of its cast and crew and Altman's touch is undeniable, especially in the smooth blend of movie stars with radio personalities. The show, which tends to stick with more music-driven material, frequently eschews the stars for its real life cast of Robin and Linda Williams, gospel singer Jearlyn Steele and the Guys All-Star Shoe Band (Guys Shoes being one of the show's Keillor-concocted sponsors). The on stage performances feature several standouts, particularly around such fictional advertisers as Jen Jensens's Herring and a duct tape spot that devolves into an attempt by Rhonda to outwit Foley Artist Tom Keith. Meryl and Lily, who have both sung onscreen before, do justice to their numbers, and Meryl shares a terrific duet with Keillor on Carter family classic "Gold Watch and Chain." Lohan's last minute singing debut is a nice comedic melding of "Franky and Johnny" and riffs from stories of previous scenes and Harrelson and Reilly knock Keillor's "Bad Jokes" out of the park with such precision, one would swear these two have been making their living like this for decades. If "Prairie Home" strikes a false note, it is in the awkward inclusion of Noir's totally different, albeit humorously delivered, genre schtick and Madsen's initial stiffness in a role that is a subpar stealing of Jessica Lange's "All That Jazz" babe. Except for its bookending opening and closing scenes, the film was shot entirely at "Prairie Home's" real theater by cinematographer Edward Lachman ("Far from Heaven"), whose gliding DV cameras snake up and down stairs and through floors, eavesdropping offstage and presenting the action onstage. Production (Dina Goldman, Altman's "Tanner on Tanner" HBO series) and costume (Catherine Marie Thomas, "Kill Bill: Vol. 1 and 2") design are beautifully coordinated, the Johnson women backstage all blondes and burgundies, Lefty and Dusty's prairie dust highlighted with greens and blues. The whole production frequently recalls the similarly themed Neil Young stage show, "Heart of Gold." "A Prairie Home Companion" is good, solid, Midwestern Altman propelling Keillor's brand of comedy towards a broader audience. It's often those small, tossaway moments - Keillor reviewing script unabashed in his underpants, Streep cheekily yipping extra 'ees' out of a sung 'prairie,' that make it special.

The venerable old Fitzgerald Theater, longtime residence of GK’s (Garrison Keillor) down home radio program, has been sold and soon will be turned into a parking lot. This night is the last performance of the long-running live-broadcast show and all of its players are there for the finale of “A Prairie Home Companion.” Maestro ensemble-cast director Robert Altman, now at the ripe young age of 81, wades into the thick of things once again, taking Garrison Keillor’s story (with Ken LaZebnik) and script and telling us about the end of an era. Suave, though under-employed, private detective Guy Noir (Kevin Kline) is in charge of security of the Fitzgerald and prepares for his last night working with GK et al as they get ready for their last ever radio show. It’s business as usual for GK as he assembles his regular roster of performers for the final performance of A Prairie Home Companion, a show that has been popular Middle America entertainment for over 30 years. Joining GK at the microphones are sister singers Rhonda and Yolanda Johnson (Lily Tomlin and Meryl Streep); Yolanda’s gloom-poetry obsessed daughter, Lola (Lindsay Lohan); cowboy crooners Dusty and Lefty (Woody Harrelson and John C. Reilly); gospel singer Jearlyn Steele; and, aged Chuck Akers (L.Q. Jones). Molly (Maya Rudolph), GK’s assistant is the power behind the throne as she musters the talent to be in front of the mics ontime. The other players include Virginia Madsen as the Dangerous Lady, an angel who may be ther to save the show - or not. Tommy Lee Jones makes an appearance as the Axeman who arrives to make sure the last broadcast is just that. Altman combines the ongoing radio broadcast, always present up front or audible in the background, with the give and take between the players. There is always something going on as we live the last couple of hours of GK’s show. The Johnson sisters discuss life after the program ends; Lola struggles within until she is brought onto the stage in the last minutes of the show; the angel pays a visit to one of the cast members; Dusty and Lefty push the boundaries of good taste, much to the chagrin of the producer, Al (Tim Russell); and, the sandwich lady keeps pushing the egg salad sandwiches. A Prairie Home Companion” is a delightful, energetic film that is chock full of entertaining songs, behind the scenes joys and turmoil and fine performances all around. One particular on-stage bit has the Johnson sisters trying to stump the show’s sound effects man (Tom Keith) in a funny, unique manner as they fail to best him in their challenge. I doubt that the tweenie crowd, with few exceptions, will spend their money to see this little slice of life movie. “A Prairie Home Companion” is aimed at a more mature demographic that is familiar with Keillor’s homey radio programs and they will be pleased. This is the kind of entertainment that will get the over-50 crowd out of their Lazy Boys and into the theater and will do quite well with the oldsters in its ancillary market, too.