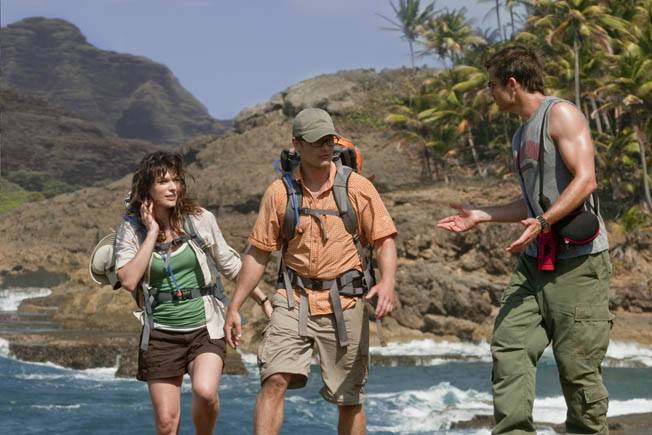 Newlyweds Cliff (Steve Zahn, "Happy, Texas," "Management") and Cydney (Milla Jovovich, "The Claim," "Resident Evil: Extinction") are extreme outdoors types who decide to spend their honeymoon backpacking to one of the most remote beaches in the island of Kauai. But along the trail, they discover other hikers, frantic over the grisly murder of another honeymooning couple back in Oahu. Cliff and Cydney join up with another couple for safety, but soon all kinds of nasty things begin to happen and no one knows who can trust the other on a vacation that began as "A Perfect Getaway."

Writer/director David Twohy has done some better than average genre work in the past ("Pitch Black," "Below"), but his latest is a total cheat. Even the Hawaiian Kauai locations are really Puerto Rico. "A Perfect Getaway" coasts on the diverting characteristics of its four leads, but I predicted who the killer was before I left the house and I bet you can too. To make matters worse, once the killer is revealed, rewind what came before and everything is a false set up to dupe the audience. This self-aware screenplay is too self-satisfied to dot its i's and cross its t's. We meet Cliff and Cydney riding a Jeep alternately playing back wedding video and videotaping themselves. When they pass a couple of tattooed hitchhikers, Cliff stops and Cydney is uncomfortable. Cleo (Marley Shelton, "Sin City," "Grindhouse") seduces Cydney with her own wedding picture, but Kale (Chris Hemsworth, "Star Trek") is annoyed at their initial vibe and refuses the ride. The couple stop at a local store to purchase supplies and permits to hike the remote trail and Cliff flashes around his bankroll and his hi-tech vidcamera like a yokel. On the trail itself, they hit a scary patch and meet Nick (Timothy Olyphant, HBO's "Deadwood," FX's "Damages"), who blithely gets them across and who peaks Cydney's interest in seeing a 'secret' waterfall that he's camping at. They're surprised to meet Nick's nude girlfriend Gina (Kiele Sanchez, TV's "Lost," "Mr. Magorium's Wonder Emporium") there, as he hadn't mentioned her, although he introduces her as the love of his life. After having heard the news about the gruesome Oahu double murder, Nick and Gina seem to keep getting stranger - he's a special ops guy who has one nasty knife strapped to his leg. Gina knows how to butcher a goat and notes several times that Nick is particularly difficult to kill. Of course, they learn this *after* they've agreed to stick together, but then they've also spotted that threatening pair of hitchhikers on their tail, so maybe Cydney's right and Nick just wants to get written into Cliff's next screenplay. That's right - Cliff's supposed to be a fledgling Hollywood screenwriter and Twohy puts out all kinds of screenplay 101 into Nick's dialogue, like the 'red snappers' he mistakes for 'red herrings.' Twohy's thumbing his nose at us as his herrings snap at our heels. He should thank his casting agent, because it's the cast that keep us marginally invested. Timothy Olyphant has a great way of balancing acting like he's in on the joke combined with a blend of suspicious and endearing behavior. His sly performance may be a little over the top, but that's just what this ludicrous movie needs. It's also kind of fascinating to hear Milla Jovovich try on a flat Midwestern accent that makes her a whole new girl. Kiele Sanchez has a likable quality and the camera loves her. Zahn pulls out the uncertain guy that he's played before as we wonder how he ended up paired with Jovovich. The film features some really beautiful looking locations and Twohy employs this strange blue and white flashback footage that's genuinely creepy. Sound was flat and two-dimensional at the screening I attended which may have been a theater issue. Special effects are used for some gratuitous violence at the film's climax that will have one alternately laughing and squirming. "A Perfect Getaway" is anything but, but at least the actors deliver more than the type of paycheck performances these things usually warrant.