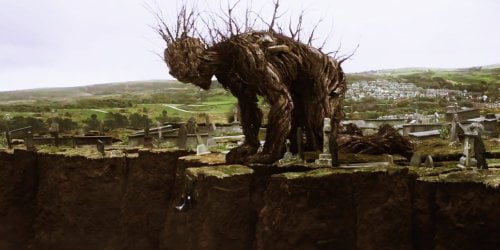 Conor (Lewis MacDougall) is young teen with the weight of the world pressing down on his narrow shoulders. His mom (Felicity Jones) is terminally ill and he must help care for her and, at school, he is bullied every day. He becomes more and more withdrawn until, late one night, he sees a giant creature emerging from a huge ash tree in the nearby cemetery. The huge root-creature tells the boy three stories with the proviso that, in return, Conor must tell the giant a story of his own when next “A Monster Calls.”

The story, originally conceived by the late Siobhan Dowd, who suffered from terminal cancer, was put to the page in 2011 by Patrick Ness (with illustrator Jim Kay). The children’s book is now adapted to a live action/CGI fairy tale of a 13-year old boy dealing with too much: a dying mother whom he is powerless to save, an absent father who abandoned them and a stern grandma (Sigourney Weaver) who seemingly dislikes her grandson. Add to this the constant bullying at school and it becomes too much for Conor. Enter, the boy’s alter ego. At 12:07 one night, he hears noises outside and looks out onto the cemetery and church where the ash tree undergoes a dramatic transformation into the menacing giant. But, the monster is there to help Conor over successive nights, always at 12:07, though the boy does not see how its three stories can help him cope with his life crises. “A Monster Calls” deals with the boy’s helplessness and loss and anger as he strikes out in unexpected ways to deal with his loss. It is a story of healing and acceptance and is a solid coming-of-age story fit for the holidays.