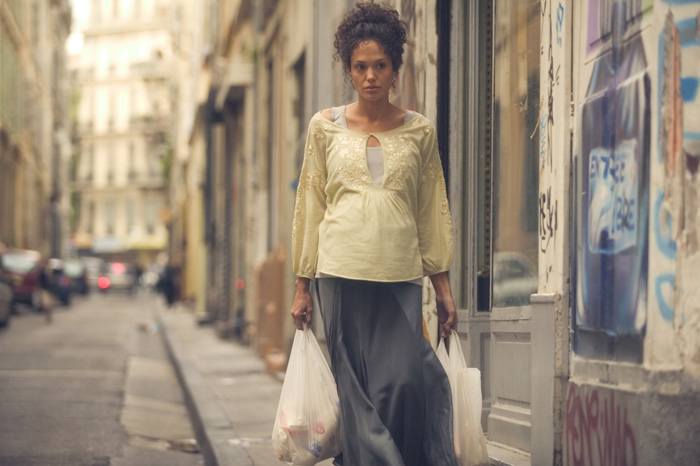 The Wall Street Journal's South Asian Bureau Chief, Danniel Pearl (Dan Futterman, "Urbania," "Enough"), brought his pregnant, Parisian-born wife, Marianne (Angelina Jolie), also a journalist for French radio, to Karachi, Pakistan, following a lead on his story about shoe bomber Richard Reid. They were excited to be leaving the next day, yet January 23rd, 2002 proved fateful - Danny was captured by terrorists who would eventually kill him, but during the time he is held captive, he sends evidence to Marianne of "A Mighty Heart."

Although not by design, eclectic director Michael Winterbottom ("24 Hour Party People," "Tristram Shandy: A Cock and Bull Story") has completed a post-9/11 trilogy with this docudrama which works as an investigative policier, but capsizes under the weight of its star's celebrity baggage. "A Mighty Heart" could have been a much better movie had Marianne been cast with a lesser known actress. And although Jolie's performance has received much praise, it is impossible to see Marianne through her celebrity or to ignore the acting gears grinding. The best of Winterbottom's trilogy was his first, "In This World," another docudrama which followed the fictitious flight of a young Afghani boy to the West. His real documentary, "The Road to Guantanamo," a subject overemphasized in his latest, was muddled and distancing, an explosive topic whose subjects, the Tipton Three, Winterbottom failed to connect us with. That same problem also dogs this film, as we never get a real sense of Daniel Pearl or his marriage and so do not become emotionally involved in Marianne's tragedy. Marianne we do get to know and although Jolie smartly chooses not to make her wholly sympathetic (she can be prickly and often appears too composed) she also doesn't compensate much. A few 'I love you messages' and some picture postcard flashbacks do not produce Marianne's softer side - the actress appears too intellectually aloof and guarded. The emotional breakdown scene after Marianne discovers Daniel has indeed been murdered is like a show-stopping guitar solo, a flashy wallow not helped by Winterbottom's decision to keep his camera so close. Scenes of Marianne being assaulted by media cannot but help snap Jolie into ironic focus again. Whether intended or not, this casting (Brad Pitt executive produced the film) simply smacks of self promotion and image makeover - see me, Jolie, as a strong, politically savvy, racially mixed mother. The performance of note in "A Mighty Heart" instead belongs to Irfan Khan ("The Namesake") whose simply named Captain heads the Pakistani end of the investigation. Khan gives a quiet, measured reading of a dignified man intent upon proving his country innocent of any complicity while also feeling compassion for the human side of the story. In following him, Winterbottom gets at the political quagmire that engulfed the Pearl kidnapping and made it so difficult to solve. Good support also comes from the surrounding characters that also represent ramifications - Will Patton ("The Mothman Prophecies") is an odd mix of sleaze and optimism as U.S. Consulate diplomat Randall Bennett, who advised Pearl he would be safe if he met with Sheikh Gilani in public and then stands by approvingly as Captain tortures information out of a suspect. Denis O’Hare, ("Half Nelson," Stephanie Daley") seems both authoritative and out of his depth as Wall Street Journal foreign editor John Bussey, an appropriately converse response to a horrific situation. As Asra Q. Nomani, an Indian journalist who lodged the Pearls in Karachi, Archie Panjabi ("Bend It Like Beckham," "The Constant Gardener") shows feminine support of her friend and scared irritation at being pulled into the story, accused by the Pakistani media of being an Indian spy (Pearl's kidnappers first accused him of being CIA, then Mossad). As Daniel's parents and sister at home, Perrine Moran, Jeffrey Kaplow and Amy Shindler project American Middle Class naivete. "A Mighty Heart" is a good and realistic looking production with its on location shooting and art direction that captures the cramped facilities of a third world CNN outlet. The film is shot and edited by "In This World's" Marcel Zyskind and Peter Christelis for a similar a you-are-there effect. "A Mighty Heart" is a film at odds with itself, a docudrama whose docu cannot withstand the shine of its star.

On 23 January 2002, the South Asia Bureau Chief for the Wall Street Journal, Daniel Pearl Dan Futterman), left his pregnant wife, Mariane (Angelina Jolie), for one last interview before they leave Pakistan for good. He never came home. Eclectic director Michael Winterbottom adapts, from the screenplay by John Orloff, Mariane Pearl’s book about the frantic search for her missing husband in “A Mighty Heart.” This is a mixed bag of a thriller. The best thing about it is the docu-style investigation by the Pakistani security forces, led by its captain (Irfan Khan (“The Namessake”) in a terrific performance), as they tenaciously pull out all stops to find, we soon learn, the kidnapped journalist. This is the meat of A Mighty Heart” and developed fully as international attention is mustered in an enormous manhunt to recover Pearl from his captors. It is a fast-paced and harrowing depiction of the machinations to thwart the terrorists and save the bureau chief. Now, let us talk about what is the attraction for many to “A Mighty Heart” – Angelina Jolie. Yes, she is a beautiful woman, but, no, she is not the reason to see the film. Throughout the run time of the film, I never got the sense that I was watching Mariane Pearl. Instead, the all too frequent close ups of the actress’s gorgeous eyes and full, sensual lips kept me from believing her to be the beleaguered Mariane. I just kept thinking “Angelina Joli.” This inability to suspend disbelief over Jolie as Mariane keeps “A Mighty Heart” from being a start to finish manhunt thriller. This is too bad as the thriller portion of the film is far more compelling than the character study of Mariane Pearl. The good news is, the search thriller is suspenseful and well worth the price of admission. The huge and mostly unknown cast, at least to us in the US, do a fine job in creating believable characters for both the good guys and bad guys. Only a few, like Will Patton as the US Counsel, are familiar faces and the diverse cast make you believe in their investigation and dedication. Helmer Winterbottom is well known for using a documentary filming style with such works as “In This World,” “Tristram Shandy: A Cock and Bull Story” and 24 Hour Party People.” He uses this method to terrific effect in telling the story of the hunt for Danielle Pearl. Winterbottom’s long time cinematographer Marcel Zyskind uses fast-moving handheld cameras to capture the copious action as the Pakistani security forces frantically use every clue, contact or informer to try to rescue the doomed journo. Peter Christelis’s fine, fast editing helps raise tension and keep it there. The film falls flat only when the inaction turns to Jolie. What could have been a great film, overall, is just good. I have to wonder what “A mighty Heart” would have been if another actress was cast in the role of Mariane Pearl. I think a better movie would have been the result.