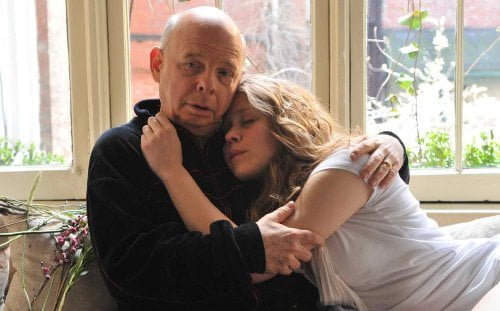 Halvard Solness (Wallace Shawn, "The Princess Bride") lies dying, but still holds a firm grip on those around him, including his wife, Aline (Julie Hagerty, "Airplane!"), his former competitor turned employee Knut Brovik (Andre Gregory, "My Dinner with Andre"), Knut's son Ragnar (Jeff Biehl) whose talent he stifles and Ragnar's fiancee Kaia Fosli (Emily Cass McDonnell), now under his sway financially and sexually. But when young Hilde Wangel (Lisa Joyce, "The Messenger") arrives to remind him of events ten years prior, guilt and a stab at redemption follow for "A Master Builder."

Working with Shawn's screenplay of his own adaptation of the Ibsen play mounted on the stage by Gregory, Jonathan Demme could almost be in the midst of a 'house' trilogy, this being his first feature since 2008's "Rachel Getting Married." But despite the similarity of hand held camera (by "Married's" Declan Quinn) following conversational configurations in various spaces of a rambling Manhattan home, the movie belongs to Shawn, completing a trilogy of his own with theater partner Gregory ("My Dinner with Andre," "Vanya on 42nd Street"). It's a remarkable adaptation, Henrik Ibsen by way of Bob Fosse, a little "All That Jazz" influence in this permutation featuring modern dress and period manners and language, fitted out by a note perfect ensemble. Shawn has reimagined Ibsen's hale and hearty Solness as a man dying, his black pajamas adorned with red piping matching IVs snaking out from under his sheets in an all white room. As the Broviks attempt to maneuver an approved commission, Halvard bristles. He keeps Kaia behind under false pretenses, then calls in Dr. Herdal (Larry Pine, "Moonrise Kingdom") for assessments on his wife's perception of him (this just after she found him with the younger woman). Hilde's arrival marks a transition - Halvard gets out of bed and, after an uncomfortable introduction of Aline to Hilde, who's asked to stay the night, the master builder and the young woman traverse his past, as if his life is flashing before his eyes (Demme uses images of treetops rushing overhead, recalling his similar, architecturally oriented opening credit sequence) with Hilde his Angel of Death. And so the Master Builder is revealed the master manipulator, a man who used the bad fortune of others to further his own good, his one tilt towards humility in not embracing the title of architect (he clearly values the Broviks' superior engineering skills and fears the younger's assumption of his career). In his personal life, he also saw his wife's destiny cruelly crushed, and so took it upon himself to find happier female company wherever he could - even with this woman who was twelve years old when he met her, making promises she's come to call due. The symbolic placing of a wreath upon the church spire he built those ten years ago, an event he's never been able to repeat due to severe vertigo, is used to bring the action back in line with Ibsen's finale. Wallace may not match Ibsen's description of Halvard Solness, but he understands the character so deeply, conveying warring emotions beneath a shallow geniality. Lisa Joyce is a revelation as the young woman who toys with him, upbraids him and ultimately inspires him (one wonders if she ever slipped in her repeated, rapturous cries of 'Master Builder!' Outtakes on the DVD release?). These two are usually framed in close up, the better to catch fleeting tells and unbridled joy and anger flitting across their faces. Also astonishing is Hagerty, whose pinched, defeated Aline is truly a woman of another era. "A Master Builder" is not the most well known of Ibsen's works. Shawn's psychologically adept and modern-yet-not reworking should change that. This is an enthralling mix of stage and screen.