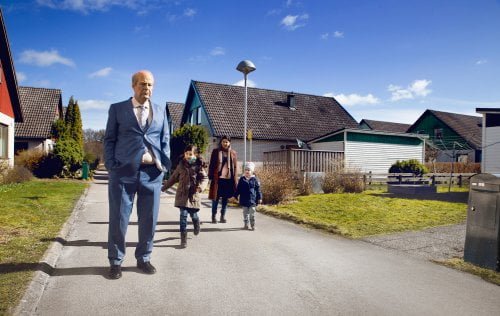 59-year old Ove (Rolf Lassgard) is grumpy, forcibly retired widower who was once the president of the condominium association, until fired, in a small Swedish town. But, his gruff demeanor and self-appointed role as neighborhood watch annoy his neighbors, until a family moves into the house next door to Ove. The mom of the family, Persian-borne and pregnant Parvaneh (Bahar Pars), soon sees that there is more to and can help “A Man Called Ove.”

At the age of 59, Ove (Rolf Lassgård, "After the Wedding") is his block association's curmudgeon. He lost his beloved wife, Sonja (ray of light Ida Engvoll, seen in flashbacks) just two years ago and just been forced into retirement. With nothing to do but harass his neighbors, he decides to end it all but something is always interrupting "A Man Called Ove." Adapting Fredrik Backman's Swedish bestseller, writer/director Hannes Holm has pulled off a minor miracle. We've all seen plenty of films where an older crank is sparked into new life by crossing paths with another, but this one feels fresh because of its layered structure, Scandinavian sense of humor and first rate performance from Lassgård. We immediately know what kind of man Ove is from the film's opening scene. He argues with a supermarket clerk that his discount coupon should be valid despite the fact that he's only buying one bouquet of roses, not the two designated. When he speaks to Sonja at her grave, he's a different man but we wonder just how the woman stood him for so long. He barks at a neighbor whose dog pees on the walkway, yells at anyone who dares to drive through restricted areas and responds to neighbor Anita's (Chatarina Larsson) request for help with her heating with sarcasm. Essentially he believes everyone is an idiot and when a new neighbor, Patrik (Tobias Almborg), has difficulty backing up a trailer he is no exception. But Patrick's wife, Parvaneh (Bahar Pars), shows nothing but kindness, bringing over chicken and rice as a thank you for his help. Meanwhile he tries to commit suicide. Several stabs at hanging don't work, so he gets his garden hose back from Anita (where we learn her husband, Rune (Börje Lundberg), is wheelchair bound) and tries to gas himself in his car. Every attempt, surprisingly humorous, brings back a memory, beginning with his loving upbringing by his widowed dad (Stefan Gödicke). As we learn how cruel life was to the growing Ove and how Sonja changed everything until yet another tragedy struck, we gain more and more sympathy for the man. The most hilarious flashback gives us the genesis of the block association's governing, Ove (Filip Berg, "Evil") back then a kindred spirit of Rune's (Simeon Lindgren), until he discovered one unfortunate difference. Especially lovely is how the influence of two women affect the main character. One look at Ida Engvoll, a Scandinavian Elizabeth Moss with a glorious smile, and we can see how she immediately won Ove's heart. Their courtship is charming. Bahar Pars is a different kettle of fish, asking the type of assistance that would normally send Ove ranting, yet he's so flummoxed by her manner, he acquiesces and discovers something in the bargain. It's a lovely relationship that somehow transcends cliche and "A Man Called Ove" is a delight from start to finish. Grade: