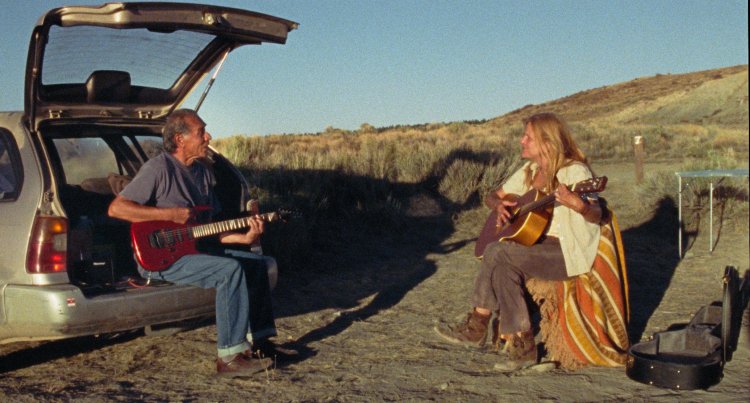 At a campsite on a lake situated where desert meets the Colorado Rockies, Faye (Dale Dickey) spends her days in an unchanging routine.  Every day she hopes Postman Sam (John Way) will bring a reply from Lito (Wes Studi), the man she loved when they were children living in these parts.   He’ll arrive unexpectedly and while they are initially awkwardly shy around each other by nightfall they will duet on “A Love Song.”

For his feature film debut writer/director Max Walker-Silverman had the wisdom to write a lead role with character actress Dale Dickey in mind.  Hers is a talent I’ve admired since her turn as a trailer park hooker in TV’s ‘My Name Is Earl,’ a talent more recently championed by filmmaker Debra Granik in both “Winter’s Bone” and “Leave No Trace.”  Walker-Silverman has set her off like the gem she is, Dickey slowly unveiling a lovely, poignant character study of a widow ready to reengage with life.

But while Dickey’s central performance is the greatest of “A Love Song’s” assets, it is not the only one, Walker-Silverman celebrating nature and love in all its forms.  Every supporting role adds to the whole and while the pre-teen girl, Dice (Marty Grace Dennis), and the four adult cowhands (Sam and Scout Engbring, Gregory and Jesse Hope) who show up with spades to move their father’s unmarked grave add whimsical humor, the filmmaker knows just how far to push things, never overstepping into cutesy tweeness.

Faye begins each day awakening in her camper to birdsong she identifies before rising.  She brews coffee (Bustelo), sets her portable radio to a local country station and heads outside to check the crawfish traps which provide her daily meal.   Every time there is a knock at her door, Faye nervously runs her hands through her hair and every time she opens it, someone stands twenty feet away (an odd little detail which changes radically when Lito arrives).  The first knock comes from Dice, who asks if she can move her campsite as their pops is buried where her camper stands.  Faye explains that she cannot as she’s waiting for someone who expects to find her there, but she’ll be gone eventually.  The next knock is from fellow campers, black lesbian couple Jan and Marie (Harlem stage actresses Michelle Wilson and Benja K. Thomas) inviting her to dinner.  We can see Faye weighing the risk of abandoning her site, but she accepts and hears about how a weekend which was supposed to feature a marriage proposal has turned into four and a half weeks without one.

We see the expected silver car approach the camper before Faye does and she’ll turn around to see Lito right up at her door, knocking, his black lab Huck by his side, a bunch of wildflowers in his fist.  They wonder if they even recognize each other, their reminisces about a school field trip to this very spot telling us just how long it’s been.  Eventually, he’ll put out a guitar, downplaying his ability by praising his deceased wife’s.  Faye also has an instrument and finally they unite in harmony, singing Michael Hurley’s ‘Be Kind to Me.’  When Lito’s evening preparations prove too cautiously respectful, Faye asks him to come inside.

While Walker-Silverman largely keeps the action to one location, cinematographer Alfonso Herrera Salcedo, shooting in 16mm, acquaints us with its bounty, visitors to Faye’s campsite turning it into a rural gathering spot.  The filmmaker shakes things up in the film’s last act, just like Faye’s life.  What was once divided into day and night by the two guidebooks on her shelf has been shaken loose, a rut conquered.  Faye has refound joy, a final grace note delivered by mailman Sam.

“A Love Song” is a love letter to Dickey delivered by a promising new talent.

Every so often, I see a film by a brand new filmmaker (Max Walker-Silverman) with a couple of veteran actors (Dale Dickey and Wes Studi) that is simply a pleasure to watch. Faye is living at campsite #7 by a lake in Colorado, living day-to-day in her camper waiting for a visitor as “A Love Song” unfolds.

As she waits for her unknown (to us) caller, she lives a simple existence; fishing for crayfish, bird watching and studying the stars. We are faked out, at one point, when a van, pulls up and Faye’s, and our, expectations run high, only to have them dashed as it turns around and drives off.
Then, the visitor, Lito (Studi), shows up and a tentative rekindling of a long ago - love or friendship or something else – as they spend time together, playing music and singing and eating crayfish. It is all very tentative and chaste as if they do not want to ruin what they once had.

“A Love Song” is a sweet but melancholy tale not of loneliness but of being alone and secure in your own skin and Dale Dickey fully embodies her character Faye.