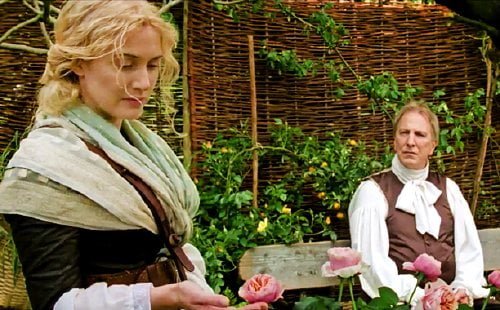 During the reign of King Louis XIV (Alan Rickman), a very special woman, Sabine de Barra (Kate Winslet), a professional landscape artist in a world dominated by men, is invited to interview for the job of Royal Gardener. Her talent and willingness to get her hands dirty brings her to the attention of master gardener Andre le Norte (Matthias Schoenaerts) and she will introduce to the royal court “A Little Chaos.”

After King Louis XIV (Alan Rickman, "Harry Potter's" Severus Snape) challenges his Master Gardener André Le Notre (Matthias Schoenaerts, "Far from the Madding Crowd") with creating heaven on earth within the grounds of his new Versailles palace, Sabine De Barra (Kate Winslet) invites much curiosity as the lone woman invited to interview for a creative landscaping position. Le Notre finds her plans go against his philosophies, but with a little shove from his astute assistant, De Barra is commissioned and her presence at court causes more than "A Little Chaos." Cowriter(with Jeremy Brock and Alison Deegan)/director Alan Rickman's ("The Winter Guest") sophomore film is a lovely period piece that reflects on beauty, love, honesty, and kindness along with loneliness, court and gender politics, jealousy and malevolence. Winslet literally gets her hands dirty creating her forward thinking, earnest commoner with the soul of a poet and a secret burden. Rickman's film holds many charms, not the least of which is his own performance as the King who would be commoner for one fantastical afternoon. The title refers to the conflict of landscaping theory between Le Notre, who favors highly symmetrical designs, and De Barra's more natural creations. When she arrives at his estate, she finds three men awaiting, Thierry Duras (Steven Waddington, "The Imitation Game") noting his successful hour with the Master. De Barra's ousted in three minutes flat, but upon her unexpected return, Duras proves a most supportive ally. As does Le Notre, the dashingly handsome man whose demeanor hints at an inner sadness. Madame Le Notre (Helen McCrory, Showtime's 'Penny Dreadful') enjoys the lifestyle he provides her, indulges in open marriage, yet expects a faithful spouse. His obvious intellectual communion with his new employee turns her as green as the gloves which will betray her. When De Barra hears Le Notre's description of what she must build, she declares it an 'outdoor ballroom,' a note of wonder in her voice. She digs right in, hammering posts to hold the tiers which will create her amphitheater, astounding Le Notre with an engineering solution to fuel her fountains. After an attempted sabotage, she must adapt like the plants that she works with. At its heart, "A Little Chaos" is about three lost souls whose meeting helps each find happiness once more. There is a touching gentleness woven throughout the script, acts of kindness which reverberate. When De Barra is utterly lost on her first appearance at court, Antoine Lauzun (Rupert Penry-Jones, "Match Point") steps in, royalty aiding a commoner with exceptional grace. The frivolous, funny Duc d'Orleans (Stanley Tucci) has a wife, Madame Princess Palatine (Paula Paul), who knows she is essentially a beard, but is so open-hearted she draws nothing but admiration. When the King's current mistress Madame De Montespan (Jennifer Ehle, "Zero Dark Thirty") is insulted by him in public, the bold De Barra invites his reconsideration with allegorical talk of a rose ('a kindness without bribery' marvels De Montespan). The film takes an unnecessary dive into third act melodrama, De Barra's haunting fragmentary flashbacks becoming whole, her situation echoed among the women of the court in a scene of sisterhood that, while in keeping with the gentle tone, stretches credibility. But Rickman has the unveiling of De Barra's garden enclave in the wings and his finale makes good on the dance between the gardener and her King. Grade:

This is Alan Rickman’s second time behind the camera (his first was “The Winter Guest (1997)) and he tackles a lavish period piece with a strong feminine viewpoint. Sabine is unlike the women of her time. She is fiercely independent and will speak her mind when necessary. She is also a master gardener; a talent Andre sees clearly as they work closely together in the garden of king’s new palace at Versailles. This, of course, will lead to something more than a professional relationship as they fall in love. The romance that slowly builds through the film is layered with other things: court intrigue, conspiracy, jealousy, love and hate. Through all these diversions, Sabine strives, against great odds and hindrances to bring her lavish, and a little chaotic, design to fruition, which the viewer eagerly anticipates. “A Little Chaos” is not a great movie but it is a nice little package that delivers a fine performance by Kate Winslet – what else would you expect – as the fictional Sabine de Barra. The actress evokes empathy for her character, a strong-willed and capable woman who knows her own mind. She is atypical of the time, giving “A Little Chaos” a modern feminist feel. Director Rickman does triple duty, co-writing the screenplay with Jeremy Brock and Alison Deegan, and portraying the Sun King. He is only onscreen for just a few scenes but steals every one. Matthias Schoenaerts is suitably hunky as Andre but was better in this year’s “Far from the Madding Crowd,” another period film with a strong femme lead. “A Little Chaos” is a little fish in a big pond of summer blockbusters but it is a film worth seeing for its story, characters, especially Sabine, and period production.