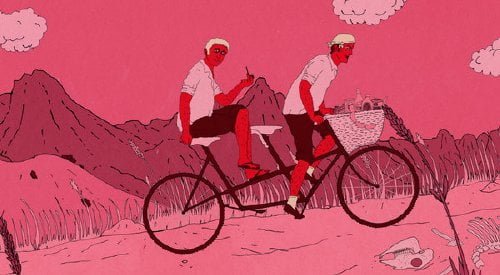 Monty Python’s Flying Circus alumnus Graham Chapman left this mortal coil in 1989 at the young age of 48. A triumvirate of directors takes his self-told tale (with longtime partner David Sherlock) and, with 14 animators helping out, the former Python gives us “A Liar’s Autobiography: The Untrue Story of Monty Python’s Graham Chapman.”

Founding Monty Python member Graham Chapman died in 1989 of throat cancer, having battled alcoholism and prejudice against his gay lifestyle. Twenty-three years later, his own untrue words have been made into a film by surviving members of the comedy troupe, who mix their voices with Chapman's from an audio recording of his book, "A Liar's Autobiography: The Untrue Story of Monty Python's Graham Chapman." Directed by Bill Jones (son of the Python Terry Jones), Jeff Simpson and Ben Timlett, this 3D film features a multitude of animation styles from many different animation houses, running the gamut from animated cut-outs (more reminiscent of 'South Park' than Terry Gilliam), early CGI big round head looks, a stop motion shadow box (where Cameron Diaz voices Sigmund Freud!), watercolors, more obviously brush-stroked moving paintings, the flat overly colorful crude offerings of 1960's Saturday morning cartoons and even the Beatles' "Yellow Submarine" - if that sub had been a penis. All the Python's voices heard, especially Chapman's earliest partner in crime John Cleese, except for Eric Idle (the Pythons are infamous for infighting, most recently over earnings of 'Spamalot,' which Idle shepherded to the stage). Those expecting irreverent comedy in the Python vein will be disappointed, however. The film is rarely funny and we've been told straightaway that we can't even trust it to be true (did the Queen Mum really pull out a flask while taking tea at Cambridge?). What we do learn is that Chapman had a bizarre life, the only son of of typically stiff upper lip types who never understood him (except that dad defied mum's expectations of horror on his son's very public coming out). Chapman's story isn't told linearly, jumping around on flights of fancy (there is some confusion as to just when he had his first homosexual experience, as we hear two different tales). We discover that David Frost was instrumental on getting the guys going, having funded Cleese and Chapman to write a film script (they avoided real work in Ibiza instead). We also learn that Chapman had the nerve to more or less call Terry Jones, who participates here, an idiot in his book. Maybe he meant it affectionately. The most interesting aspect of "A Liar's Autobiography" is watching all the different visual styles go by, including a very effective POV representation of the DTs. Chapman's liberal life philosophy is also animated, as is a Bill Plympton-esque bit where he takes himself on in the boxing ring. Chapman's old vocal recordings have been seamlessly meshed with the other actors' current ones. After all these fantastical musings and anecdotes, however, including a flight into outer space, it is telling that the most entertaining part of the picture is John Cleese's eulogy for his friend, the video of which caps the film.

I’m not sure why we need to see the (possibly fictitious) life story of one of the Python troupe 25 years after his death. Sure, he was the most flamboyant of the Flying Circus (and openly gay – at a time when the closet door remained firmly shut for most) and created some of their most memorable characters. The filmmakers decided to use the works of a number of animators, instead of live action, to tell Chapman’s story. The result is uneven and, with abrupt transitions from one animation style to another, distracting. Chapman, a ghost from the past, narrates his life story (with readings from his book, A Liar’s Autobiography: Volume VI) to the animators’ visual interpretation of his life. Time is spent on his growing up days going on vacation with his parents, his education, training to be a doctor and finding comedy (with early collaborator John Cleese) before the fame of Monty Python’s Flying Circus. Much of this narrative has Chapman poking fun at himself and his excessive past behavior – he had to stop drinking in1977 because of damage to his liver. Early Python skits and excerpts from their film “Life of Brian” permeate the narrative but nothing from “The Holy Grail.” This creates a huge hole in the biography that calls attention to itself and prompted the question: Why? Most of the world’s introduction to the troupe was “Holy Grail,” an even greater number than the fans of the TV series, so the lack is notable. I am still not sure why “A Liar’s Autobiography” even needed to be told.