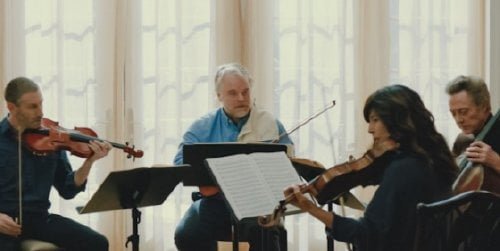 The Fugue String Quartet is celebrating a 25-year long career of making music for audiences world wide. As they prepare and rehearse for the upcoming music season, it becomes apparent to cellist and eldest member of the group, Peter Mitchell (Christopher Walken), that a disabling neural disease is going to make their first performance of the season his last time to play “A Late Quartet.”

The renowned Fugue Quartet, with its interwoven relationships and dependencies, has been playing together for twenty-five years when its senior member, Peter Mitchell (Christopher Walken), announces that he has been diagnosed with Parkinson's and that they must plan for a new cellist. This news stirs up fallow resentments and vengeful emotional moves until the Fugue is in danger of becoming "A Late Quartet." Cowriter (with Seth Grossman)/director Yaron Zilberman makes his fiction feature debut with a New York centric tale which uses musical metaphors for the emotional dynamics at play within the quartet. It's a soap opera gussied up with a high brow setting and high caliber actors that has the good grace to go out on a particularly effective note. Christopher Walken is the calming influence who keeps the melodrama from boiling over. He plays the father of viola player Juliette (Catherine Keener), who is married to second violinist Robert Gelbart (Philip Seymour Hoffman) and the former professor of first violinist Daniel Lerner (Mark Ivanir, "Holy Rollers," "Big Miracle") who formed the group and also loved his daughter. The Gelbarts' daughter Alexandra (Imogen Poots, 2011's "Fright Night") is an up-and-coming violinist who aptly describes the Fugue as the center of her mother's world - 'the one she loves, the one she partners with and the one she desires.' The film begins with a performance, Zilberman emphasizing the interaction among the four, how everything builds from Daniel's opening bar. We see Alexandra in her grandfather's class where he talks about Beethoven's Opus 131 and its seven movements which must be performed without pause, a real test of a quartet who must adapt as their instruments invariably go out of tune. And do they ever. At first, the group, especially Juliette, go into denial over Peter's retirement. Then Robert uses the opportunity to make a play for sharing the lead share. This pulls Juliette and Daniel into dangerous conspiracy which takes a dire toll on the Gelbart marriage, compounded when Alexandra acts out for parental attention. Meanwhile, Peter goes to Gideon Rosen (Wallace Shawn) to get his approval to ask Nina Lee (herself), the cellist chosen by himself and Daniel, to take his place and is denied. The film's look has the sharp clarity (cinematographer by Frederick Elmes, " Synecdoche, New York") of Daniel's precision playing. Everything is cool light and dark wood, with the exception of Alexandra's studio with its girlish colors and prints. The entire production is dignified understatement, which makes the drama all the more heated. With everything in disarray, that 25th anniversary concert arrives with Peter in place for that symbolic piece and the way Walken and Zilberman resolve their melodrama pulls everything together with satisfying finesse.

Beethoven’s beautifully complex Opus 131 for string quartet is the musical center for this drama about the long-time playing, internationally acclaimed The Fugue as they learn that their beloved cellist announces to the other three – married couple Robert and Juliette Gelbart (Philip Seymour Hoffman and Catherine Keener), the second violin and viola, and intense first violin, Daniel Lerner (Mark Ivanir) - that he has early stage symptoms of Parkinson’s disease. But, he tells them that there are drugs that can arrest the progress, but not cure the disease. This small spark of hope is the core of, when they are not playing Beethoven’s remarkable work on stage or in rehearsal, what amounts to a soap opera. Robert and Juliette are having marital problems and a musically savant daughter, Alexandra (Imogen Poots), is coming of age sexually. There is also the struggle between first violinist Daniel and second violinist Robert, who is tired of playing second fiddle all the time. What he wants is the limelight of the first position but there is the question of his ability to lead the quartet. Acting is fine, as one would expect from this talented cast, but the characters, when not performing their music (which are beautifully edited scenes), are without real depth. I could not sympathize with any except for Peter, played with his usual quiet grace by Christopher Walken, who gives a fully dimensioned performance. Scenes when he is talking about music to his students (he is also a music teacher) show the passion and understanding that Peter has for his art. The soap opera is okay but the real star of “A Late Quartet” is Beethoven’s Opus 131. We hear it in snippets throughout the film and, as hoped, is played, in all of its complexity, in the film’s sentimental finale. Attention to details, such as making you believe that the actors playing the wonderful opus are actually extremely talented concert musicians, are nicely handled. The story, though, by director Yaron Zilberman and Seth Grossman falls short of being compelling