A Home at the End of the World 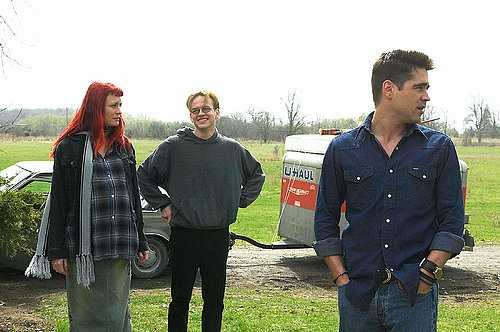 By the time he's a young teenager in suburban Cleveland, Bobby Morrow (Andrew Chalmers, "Godsend" in 1967, Erik Smith, "Cold Mountain" in 1974 and Colin Farrell, "The Recruit" in 1982) has lost his beloved older brother (Ryan Donowho, "The Mudge Boy"), his mother (Wendy Crewson, "The Clearing") and finally his dad (Ron Lea, "The Recruit"), but he is given a loving home by Alice Glover (Sissy Spacek, "In the Bedroom"), the mother of his best friend Jonathan (Harris Allan, SHOtime's "Queer as Folk" in 1974, Dallas Roberts in 1982). Bobby sticks like glue to his new family home while Jonathan makes his way into the world of Manhattan, but the two reunite and form a trio with Jonathan's roommate Clare (Robin Wright Penn, "The Singing Detective") in "A Home at the End of the World."

Colin Farrell's much ballyhooed full frontal, which was excised before the film's release, may have been the best thing about his performance. While Farrell has recently delivered on his overly hyped early buzz, his portrayal of Bobby and author Cunningham's sadistic story, ultimately deep six "A Home at the End of the World." Truly outstanding work by the women of the piece, Wright Penn and Spacek, as well as the younger incarnations of Bobby, make the movie worth a look however. In 1967, Carlton Morrow is a guru of the sex, drugs and rock&roll lifestyle and is idolized by his younger brother. Donowho and Chalmers have such a natural bond in these roles, that they make the older boy's inclusion of his preadolescent brother in an acid trip seem almost healthy. A freak accident involving a sliding glass door cuts short an ideal childhood for Bobby. 1974 finds him alone with dad, but the sweet-natured Bobby chooses geeky Jonathan to befriend and the boys become inseparable. Bobby casts his spell over Jonathan's mom Alice, too. She's entranced by the sound of Laura Nyro singing 'It's Gonna Take a Miracle,' and pretends to ignore the boys' pot smoking until Bobby suggests she join in. Jonathan is astonished when Bobby pulls Alice into their circle, but things get strange when Alice finds them having a sexual encounter. Alice and Bobby remain comfortable, engaging in a late night bout of pie making that provides a segue for 1982, which finds Bobby working as a baker and still living with the Glovers. When they decide to move to Arizona for Ned's (Matt Frewer of "Max Headroom" fame) health, Bobby is gently pushed out of the nest, so he makes his way to Manhattan and Jonathan. There Jonathan is living as an openly gay man with roommate Clare, an artsy Bohemian type who is in love with him. Bobby's charms prove overwhelming, though, and they become a couple, once again making Jonathan feel like the odd man out. Nonetheless the threesome buy a rural home together when Clare becomes pregnant, and open the obviously named Home Cafe (shades of Ann Tyler). After years of seeming happiness together, Clare eventually realizes that Bobby is the love of Jonathan's life. This is the genesis of novelist/screenwriter Michael Cunningham's 'woman in love with gay man' love triangle from the "Mrs. Dalloway" segment of his "The Hours" and it paints the author as a sexual egotist who wants to be compelling to women yet ultimately reject them. Bobby is an almost Christlike figure who Cunningham repeatedly punishes with one death after another. The character is so over the top with his expressions of love, I was almost surprised when Cunningham stopped short of having him sleep with his best friend's mom. Broadway director Michael Mayer ("A View from a Bridge") makes his feature film debut here, and he achieves some very fine performances, but he just cannot make this material work (Per the press notes, Cunningham thought it was impossible to make a two hour film from his novel. Telling that the end result runs ninety-five minutes.) Robin Wright Penn has never been better than she is as the Boho Clare, a woman who creates in one man what she cannot have in another. Penn goes through an experience and comes out sadder but wiser. (Kudos to whoever though of casting Penn against the ten-year younger Farrell - not an obvious choice.) Sissy Spacek is everything that Farrell's Bobby should be - all warmth and love (she positively glows onscreen), a mother whose hug could cure just about anything. Chalmers exudes fraternal adulation paired with Donowho's easygoing charisma. The best Bobby is the middle one. Erik Smith gets the character so exactly right, he probably makes Farrell's performance look worse than it is. When Farrell takes over the role, the character becomes a saintly, equal opportunity free-love simpleton. Roberts is fine as the conflicted Jonathan, giving a more complex performance than Allan does in earlier scenes. "A Home at the End of the World" is a cloyingly flawed piece of filmmaking featuring two brilliant female performances that hopefully will be remembered at year's end despite their flawed setting.