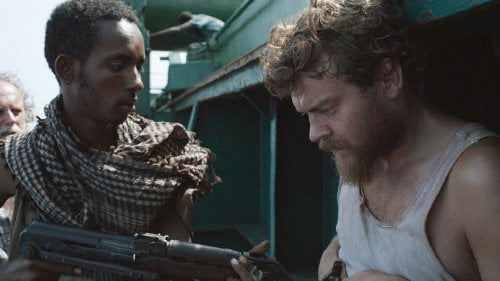 A Danish cargo vessel, MV Rozen, is heading into an Indian Ocean port when a gang Somali pirates in fast boats hijacks the ship and holds the crew hostage for millions of dollars. The CEO of the shipping company, Peter Ludvigsen (Soren Malling) pits his extraordinary will and negotiating skills against the threatening and deadly pirates in “A Hijacking.”

As the cook, Mikkel Hartmann (Pilou Asbæk, TV's 'The Borgias'), aboard the MV Rozen placates his wife back in Denmark about having to spend a few more days in Mumbai, the CEO of his company, Peter C. Ludvigsen (Søren Malling, "A Royal Affair"), jumps in to underling Lars Vestergaard's (Dar Salim, "The Devil's Double") negotiations with Japanese businessmen to drive their price down by millions. When an alarm from the Rozen sounds at corporate headquarters, Peter will be drawn into negotiations of a very different kind with Somali pirates in "A Hijacking." Actually, that last statement isn't quite true because the fiscal negotiations with the Japanese are a forerunner of what will happen with the pirates, except that lives are now hanging in the balance, a point writer/director Tobias Lindholm (coscreenwriter, "The Hunt") incorporates most shockingly into his climax with a seemingly tiny bit of bargaining. Lindholm's you-are-there docudrama works as a tense thriller, but themes of negotiation and the ability to empathize provide a rich subtext. On board the Rozen, Mikkel is a cheerful cook embraced by all for his cooking 'with love,' his own brand of unselfconscious barter. When the ship is boarded by Somali pirates, Lindholm evokes the fearful chaos with the barrage of an entirely foreign language, brusque violence and random bursts of automatic gunfire the Somalis use to cow the crew. Mikkel and his shipboard buddy Jan (Roland Møller) attempt to engage the young pirate (Abdi Rashid Yusuf, ambiguously effective) who guards them, first by learning names, then with Mikkel's chefery. Back in Copenhagen, Peter hires a consultant, Connor Julian (Gary Skjoldmose Porter), to guide them through negotiations. Connor is emphatic that Peter only speak to their negotiator/translator Omar (Abdihakin Asgar), lest the pirates use his crew for emotional blackmail. At first Peter strikes us as a cold profiteer, accentuated by his rimless glasses, closely cropped hair and no nonsense demeanor, but Lindholm's not interested in black and white. While the man follows Connor's 'rules,' his concern is apparent. Eventually there is a shift, aided by quick thinking from Lars who's learned a thing or two from is mentor. But corporate headquarters clearly cannot imagine just how awful things are on board and Lindholm escalates dismay by flashing the number of days, which roll into months, that they've been hijacked. The captain (Keith Pearson) is suffering from an unstated ailment, the men are not allowed to use the ship's bathroom facilities and no one knows what's going on back home. When provisions run low, Mikkel can no longer garner favor with his food and the solution the pirates come up with forces him into a horrific, symbolic act. The shaggy Asbæk is great as the face of the crew and a complete opposite to Malling's buttoned up exec, just as Porter's cool consultant is cast against Asgar's chummier, more desperate delegate, neither part of the organization each represents. Also strong is Yusuf, the young pirate whose actions don't always align with expectations. "A Hijacking" is taut and tense, a horrifying thriller with more than entertainment on its agenda.

From the very start, writer/director Tobias Lindholm wields the camera as a documentary observer of the harrowing 134 day ordeal that the crew of the MV Rosen is forced to endure. The action jumps between the cramped and squalid confines of the hostages’ accommodations on board the hijacked vessel and the cool, clean boardroom where Peter orchestrates his company’s response to the hijackers and their ransom demands. “A Hijacking” is a taut drama that looks and feels like a documentary account of an actual hijacking. This makes the film all the more engrossing as we get into the minds of the two main characters – ship’s cook Mikkel Hartmann (Pilou Asbaek) and shipping company CEO Peter Ludvigsen. Mikkel lives in fear of the real possibility of death at the hands of the Somali pirates. Peter, on the other hand, faces the possibility of losing his crew, ship and cargo. The negotiations drag week after week and month after month as Peter tries to whittle down the ransom demands from the original sum of $15 million to something his board of directors can accept. These negotiations take on an increasing tension as, first, the pirates’ phone goes out of service and, then, they begin to sporadically communicate via fax. Auteur Tobias Lindholm does a striking job in grabbing your attention and running with it as he succinctly tells the story of “A Hijacking.” The verisimilitude of the film and the story succeeds in putting the viewer in the middle of the action, feeling the fears and feelings of the hostages (through Mikkel’s eyes and mind). Soren Malling gives a one man performance as Peter as he works to gain his people their freedom. An all around fine production and