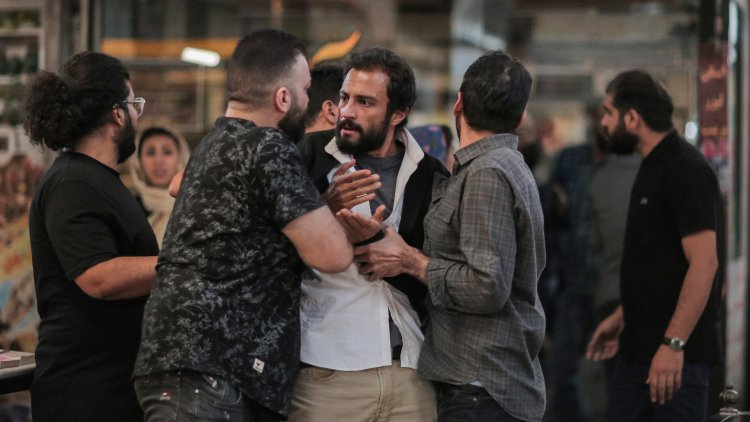 In Iran, people who cannot pay their debts may be sent to prison.  Single dad Rahim Soltani (Amir Jadidi) is such a case and when he’s given a two day leave, he intends to work out a deal with his creditor Bahram (Mohsen Tanabandeh).  But Rahim forges an overly complex and morally dubious plan to repay the older businessman who questions those who would call Rahim “A Hero.”

Writer/director Asghar Farhadi (“The Salesman”) is known for crafting tales which appear black and white on the surface but reveal grayer and grayer layers the more we learn about his characters.  Such is the case with his latest, easily his best film since his international breakout hit “A Separation.”

The filmmaker leaves Tehran for Shiraz, known for many ancient sites.  It is at one of these where Rahim leaves his bus to join his brother-in-law Hossein (Alireza Jahandideh) who is working on restoration.  Hossein and Rahim’s sister Malileh (Maryam Shahdaei) have been caring for his son, Siavash (Saleh Karimai), and Rahim asks him to contact Bahram to see if he will drop charges with a 50% repayment and guarantee of the rest.  The agreement is made.  And then things get complicated.

To say more would ruin the experience, but suffice to say a large part of the puzzle rests with Mme Radmehr (Fereshteh Sadrorafaii, "The Circle"), a woman who loses a cache of valuable coins but does not want her husband to know of their existence.  The handsome Rahim wishes to wed Farkhondeh (Sahar Goldust), who lives with her disapproving brother while Bahram's daughter Nazanin’s (the filmmaker's daughter, Sarina Farhadi) wedding is also tied into the proceedings.  There are also layers of prison officials with varying opinions and recollections and a charity, potential employer and television show which become involved until they wish they hadn’t, the latter proving a real blow to Siavash.

Farhadi weaves a complex tale of many characters each of whom has his or her own agenda, which, of course, affects their actions.  Some of those actions amuse while others shock.  There is even a hint of Preston Sturges to Farhadi’s latest, his ‘heroes’ having feet of clay, but unlike Sturges, the Iranian filmmaker doesn’t leave us on a comic note.  Social media plays an important role from text communications to shared videos, a modern veneer applied to an ancient setting.  Jadidi’s movie star looks serve the part well, the actor using his surface appeal to sell Rahim’s story.

Rahim (Amir Jadidi) went to prison for failing to pay a debt. Out on a two day leave, he finds a bag filled with gold and takes it to the authorities to find the rightful owner. His act of generosity and kindness, though, does not go unpunished for “A Hero.”

Asghar Farhadi has spent much of his career exploring human nature and all its foibles. He continues here with a uniquely Iranian story of a man in debt, paying the price by doing jail time. When he finds the bag of gold, he does what he thinks is the right thing. But, he goes about it just the wrong way and, instead of being “A Hero,” he becomes a social pariah.

This is an examination on two levels. One, is the manipulative Rahim, a man with a smile and manner but also always on the lookout for the easy way out. The other is a study of day to day life in Iran, a life that is very different for ours in the west. Here, the idea of debtor’s prison is not a part of our culture (at least, since the 19th century) but common in Iran. As such we can look into a society different from ours and learn about it.

I recommend that you just sit back and watch this drama unfold. You get to see the work of a master telling his story as well as getting a social studies course on the day-to-day life in Iran and the problems the people must face. In what could be an overtly political statement on the world we live in is, instead, a study of human nature and its shortcomings.