A Good Day to Die Hard 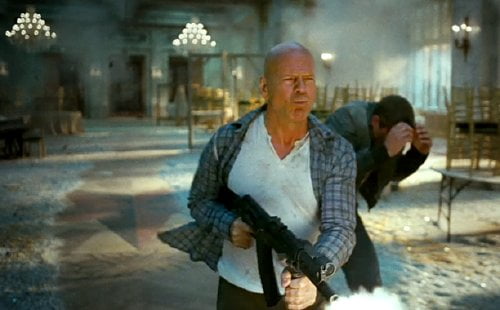 Five years ago, John McClane (Bruce Willis) was worrying about his daughter, Lucy (Mary Elizabeth Winstead, "Live Free or Die Hard"). Now he's got to travel to Russia to bring back his estranged son (Jai Courtney, "Jack Reacher"). But John can't go anywhere without pyrotechnics following and he is surprised to find himself in the middle of a plot to save Russian whistleblower Komarov (Sebastian Koch, "The Lives of Others") with the chip-off-the-old block Jack on "A Good Day to Die Hard."

The last of these came out in summer, so one must wonder if this oddly chosen Valentine's Day release is a bid for date night, lonely single guys or just desperation. The fourth sequel to the absolute best of the 80's action adventure genre has been handed to John Moore ("Flight of the Phoenix," "Max Payne"), a director not exactly known for quality, was written by "The A-Team's" Skip Woods and costars a relative unknown who looks nothing like the progeny of Bruce Willis and Bonnie Bedelia. Woods's screenplay doesn't even bother to make sense and telegraphs its blunders. It's a pile of cliched plot holes sauced with strained one liners. So, when one of McClane's cop buddies pass along the intel that his son Jack is in a Russian prison, John arrives at the Moscow courthouse just in time to see Jack being led in through a crowd with Komarov. One massive explosion later, and dad's dropped himself into the chase now being given the two escaped prisoners. He's messed up a C.I.A. operation to get the two out and so Jack must go to Plan B and get to a not-very-safe house. Seems Komarov's got the goods on his former friend, Russian PM Viktor Chagarin (Sergey Kolesnikov, "Cold Souls"), whose greed for weapons grade uranium led to the Chernobyl disaster. Komarov makes one demand - he wants his daughter, Irina (Yuliya Snigir), to leave Moscow with him, but that turns out to be yet another bad idea. There is a massive multi-vehicle Moscow car chase in which McClane takes out an armored eight wheeler with a Mercedes Jeep, some fun with a helicopter and another truck in Chernobyl and a son to father tribute with an homage to Alan Rickman's Hans Gruber, but that's about it. McClane's constant reminders that he's 'on vacation' whenever the going gets rough are an attempt to add humor, but clearly he never traveled to Russia with that intent, so what's the joke? But the worst offense here is the script. The filmmakers clearly hope no one will notice that John McClane's surprise appearance apparently set up Komarov's plan, just as the Russian is able to have an assassin in place in a situation he couldn't have predicted. The father and son dynamic would have us believe that the C.I.A. trains agents allowing for gaps in their knowledge and experience to be filled in later when dad drops in. One can't even riff off the film's title and say "A Good Day to Die Hard" is a good day to end this series. That happened years ago. John McClane's only hope is to take a page from another 80's action star, Sylvester Stallone, who, disappointed with his fifth "Rocky" film came back years later and made amends by going back to his roots.