A Glimpse Inside the Mind of Charles Swan III 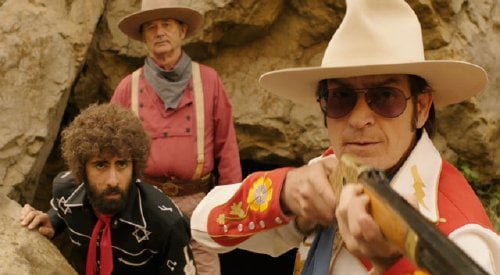 After his doctor analyzes his brain and advises us that 80% of it is given over to thoughts of sex, we watch the fantasy-fueled breakdown of a man over a breakup with girlfriend Ivana (Katheryn Winnick, "Stand Up Guys") as we get "A Glimpse Inside the Mind of Charles Swan III."

And that glimpse reveals that the mind of Charles Swan III is actually a bad movie. Writer/director Roman Coppola ("CQ") parodies several other movies within his own while also seeming to touch upon the real-life breakdown of his star, but he also appeared to have been set on making a deliberately bad film. After the amateurish, spotlit setup, Sheen actually entertains for a 5-10 minute stretch before filmmaking indulgence sinks the whole enterprise. One is left wondering if a movie made for friends to watch stoned at a party has slipped out into distribution to make money off the gullible. The worst thing about "Charles Swan III" is that it ate up one of costar Bill Murray's choosily selected film appearances, but then he probably signed on to have a good time with friends/family. When he first appears, Murray's "Rushmore" costar Jason Schwartzman is tweaking director Wes Anderson with his take on Ben Stiller's "Royal Tenenbaum(s)." Coppola cousin Nicolas Cage's ex, Patricia Arquette, shows up too, as does Aubrey Plaza doing the same thing she always does. I couldn't care less while the gang plays Western or Schwartzman and Coppola do their "Lenny" impression. I can't be bothered trying to find any meaning in the story of a graphics artist who drives around in an antique Chrysler with two fried eggs painted on the side with iconic Hollywood eateries in the background. In fact, all I took away from "A Glimpse Inside the Mind of Charles Swan III" is that if they ever make a live action Doonesbury movie, Sheen would be a natural.