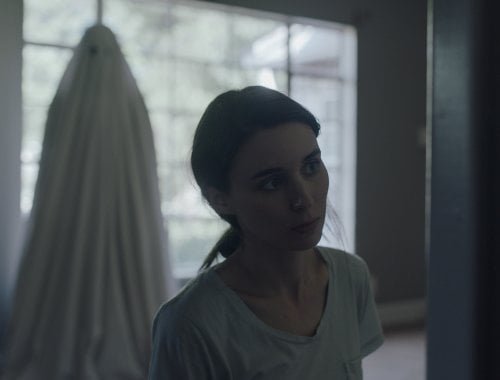 When we first meet young marrieds C (Casey Affleck) and M (Rooney Mara), they're snuggled up in bed, M telling C that she always used to leave folded up notes in the walls of places she'd lived. He is content composing music in their rundown suburban Texas ranch, but she's restless, wanting to move closer to the city. Their plans become meaningless when C is killed in a collision at the end of their driveway. He'll return to their home to be close to his grieving wife, but he is destined to stay there even after she leaves in "A Ghost Story."

I wasn't a fan of writer/director David Lowery's time tripping, slow moving "Ain't Them Bodies Saints," so his latest, which is also time tripping and slow moving, is quite the surprise. Perhaps directing a big commercial movie (Disney's delightful "Pete's Dragon") gave him confidence in his own voice. "Saints" played like a Malick wannabe, but although his new low budget Indie echoes the works of others, particularly Hirokazu Kore-eda's ruminations on time and the after life, the film's style is unique, its most startling aspect how moving Affleck is beneath a sheet. C's already had an experience with the afterlife before he enters it, a loud noise one night awakening the couple. Back in bed, C watches an eerie light dance up their bedroom wall (later Lowery will circle back to this moment, with a nod to Nolan's "Interstellar"). After M views his body in the local morgue and leaves, he sits up and follows her, ignoring a spectral doorway which opens up before him. Inside the house, he watches their realtor deliver a pie and leave a note. When M returns, she sits on the floor and devours the entire pie. C stands beneath his sheet as the days pass, Lowery reflecting the passage of time with a montage of M's morning routine. She listens to his last song ('I Get Overwhelmed,' by composer Daniel Hart's band Dark Rooms). Then, one night, she's dropped off by a stranger who kisses her at the door. Some time later, M pushes a note into a crevice, paints the woodwork over it, and leaves. The house now empty, we can feel C's despair - he's trapped and cannot follow. Time passes. C spies a fellow traveler in a floral sheet standing at a window in the house next door. They communicate telepathically, the other ghost no longer remembering just who it's waiting for. A mother with two children move in, but eventually C, frustrated trying to dislodge M's note, throws a full-on poltergeist tantrum, scaring them away. A party is held in the house, a man (Will Oldham, "Old Joy") philosophizing about humankind's quest for meaning in what we leave behind when we depart this earth and how we exist until we're lost to collective memory. Just as C's about to grasp M's note, the house is demolished, a high rise office building going up around him. At this point, Lowery's contraction of time opens into a wormhole as C plummets off the building into a field where a pioneer family settle for the night, their sad fate unrolling before us as time moves forward once again. C finds himself back in his house, observing M and himself in both his forms. Lowery's ending is profound, its meaning open to interpretation. We are left not only to contemplate man's relationship to the cosmos, but the technical difficulty achieving simple concepts. The 'simple' sheet with black eye holes caused costume designer Annell Brodeur much difficulty, she and her team often 'animating' its movement outside the camera frame. The billowing fabric is a cross between a Halloween costume and a shroud. Affleck's slow deliberate movement brings a solemn pathos to his ghost, a lost soul on a long journey to find his meaning. Lowery and his cinematographer Andrew Droz Palermo ("You're Next") employ a 1:33 aspect ratio with vignettes, giving the movie the appearance of old photographs mounted in a picture album. "A Ghost Story" is lovely, thoughtful and melancholy. Grade:

C (Casey Affleck) and M (Rooney Mara) are just starting their life in their new home when tragedy strikes. Following a deadly car accident, M identifies his body at the morgue and leaves. The sheet covered body suddenly rises and C’s spirit journeys back home in “A Ghost Story.” Writer-director David Lowery’s last film, “Ain’t Them Bodies Saints” just did not float my boat and I did not care for the story or, more importantly, the characters. I had the same feeling about “A Ghost Story” except for one thing: the ghost. The titular character is introduced simply clad in a white sheet with eyeholes as it wanders the misted landscape to return to his home. At first, I thought this a silly affectation by the filmmaker. But, as the silent, always watching specter exists without being seen as M goes about her life after her loss, the affectation works. What happens in earthly world over the span of years and decades is just seconds for those “living” in the eternal spirit world. The story is stilted and indulgent at times – one scene has M sitting on the floor in her darkened kitchen eating an entire pie that a neighbor left for her. The effect of the simple shot is strong as M just keeps on eating. But, it carries on far too long and the strength of the scene diminishes to a “come on, get on with it, already” feeling for me. The enigmatic view of the afterlife is mingled with sadness and loneliness, making you root for the ghost who is waiting for “something” but that something becomes a lost memory. It is funny (not ha-ha funny) that the central character is silent but still evokes my empathy. The story takes liberty with its view of the “life” of a ghost but the character study – I have to call it that – is striking. Casey Affleck, by the way, did not have a stunt double stand in for him during the filming.