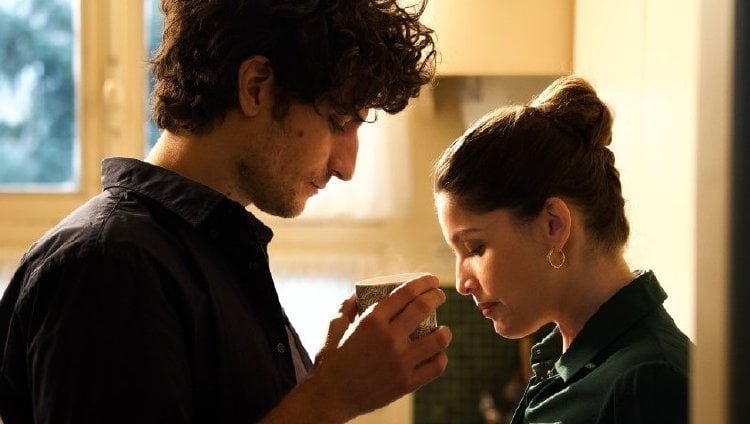 Life is good for 35-year old Abel (Louis Garrel). He lives with his girlfriend, Marianne (Laetitia Casta), in her apartment and his creature comfort is assured. Then, one day, she says “we have to talk” and the good life will be turned upside down for “A Faithful Man.”

On his way out the door one morning, Abel (Louis Garrel) is stopped by a towel-wrapped Marianne (Laetitia Casta, "Arbitrage"), his girlfriend of three years. She's not sure she's picked the right moment to tell him that she is pregnant. Abel's first concern is for her feelings on the situation, but she isn't finished. The baby is not his but their mutual college friend Paul's, she tells him, and she is planning on marrying Paul in ten days unless Abel has a problem with that. Crushed, Abel walks away, "A Faithful Man." Cowriter (with Jean-Claude Carrière)/director/star Louis Garrel won the Best Screenplay award at last year's San Sebastian Film Festival for this utterly French reflection on romance and parenthood loosely based on a Marivaux play. I have long found Garrel an acquired taste, but in this, his second film as a director, he has one of his most appealing roles yet as a man who allows women to call the romantic plays until he matures enough to consider fatherhood. The film is told from the three points of view that make up this film's female battlefield of a romantic triangle with Marianne's 10 year-old son Joseph (Joseph Engel) adding depth as a disruptor. Garrel zooms out from Abel and Marianne as he tells us how he finishes school and becomes a television journalist, thoughts of his former lover left to childhood memory. But eight or nine years later, he confronts his feelings once again when he learns that Paul has died suddenly. Attending the wake, he comforts his former lover. Two weeks later, she calls and asks him to lunch followed by coffee in their old apartment. Marianne is clearly signaling she is ready to pick up the relationship, but when Abel is left alone with Joseph, the young boy matter-of-factly tells him his mother poisoned his father and slept with the attending doctor to sidestep an autopsy. Meanwhile Paul's younger sister Ève (Lily-Rose Depp, "Tusk"), who has loved Abel from afar since childhood, is now a young woman who also sets her sights on him and is bold enough to throw down the gauntlet with her rival. Her rival's response is both risky and masterful. Garrel's film is both funny and wise, upending our expectations from beginning to end. If at first you, like I, begin to think that Garrel making himself the object of female obsession is egotistical, guess again, as Abel is a naïf in a tug-of-war where being the prize isn't necessarily what the victor wants. The filmmaker gets a sly performance from young Engel, whose motivations are at first difficult to decipher and whose wisdom belies his character's age. The film is also full of the type of seeming throwaway details that add layers of richness, Garrel having a field day with the silent communications of minor supporting players, the name of a doctor and the monumental differences between two apartments. Grade:

There are movie genres that identify with a particular country: Cowboys and the US, samurais and Japan, martial arts and Hong Kong and romantic farce and France. “A Faithful Man,” directed and co-written by Louis Garrel, is definitely French and a romantic farce. But, not in the way you would expect. Here, poor Abel is a mere drone in the battle between two queens. Marianne, when she matter-of-factly throws Abel out, tells him that she is pregnant and the child is not his, but that of his old school friend, Paul. Years pass and Abel, still obsessed with Marianne, learns that Paul has died. He discreetly attends the funeral and pays his condolences to his once lover. Things soon pick up where they left off, except, now, there is 10 year old Joseph (Joseph Engel), a boy far wiser and more manipulative than his tender years. Add to this mix Eve (Lily-Rose Depp), Paul’s younger sister, all grown up now, who has harbored a crush on Abel since she was a kid. With him back in her life, she sees her chance to fulfill her youthful dream and turn it in to the love she is sure is there. When Abel goes back to Marianne, Eve declares war on her competition, with poor, hapless Abel the pawn in the game between the two determined queens. This so French romantic comedy is a pleasure to watch. Louis Garrel directs his second feature and he smartly plays second banana to his two femme stars – two generals about to do battle for Abel, who becomes more a symbol than an actual goal. The French romantic farce still lives strong!