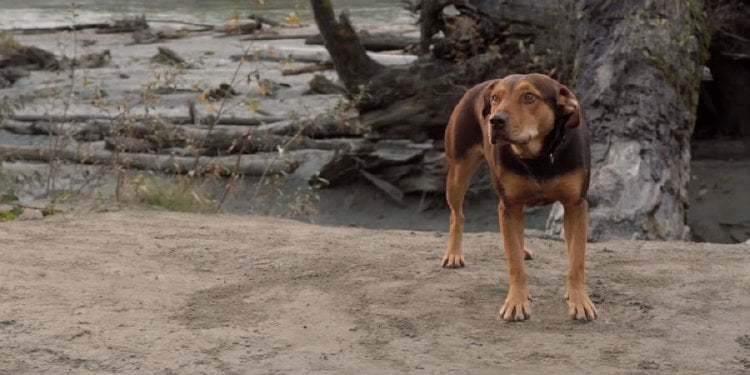 When Bella (voice of Bryce Dallas Howard, played by rescue dog Shelby) is separated from her beloved human Lucas (Jonah Hauer-King), she will brave dangerous terrain and make a difference in the lives of several new people all along the 400 mile, two and a half year journey that is "A Dog's Way Home."

Although the screenplay by the book's author W. Bruce Cameron ('A Dog's Purpose') and his wife Cathryn Michon doesn't give us anything we couldn't predict before seeing the film, director Charles Martin Smith ("Dolphin Tale") has exhibited an affinity for real life animal adventures since starring in 1983's "Never Cry Wolf," and he's made sure Bella gets her due here. While the film has a few wobbles, most notably a prominent CGI cougar named Big Kitten who won't fool anyone, it is difficult not to be affected by this tale of a dog's love and loyalty. The film is also notable for its advocacy for pit bulls, a catch-all designation for certain bull dogs and terriers that allows for unfair discrimination by breed. The film's trailer set my expectations for this movie rather low, Bryce Dallas Howard's high, girlish voice ill suited to a large dog, that CGI problem already apparent. It also misleads, giving us the impression that Bella becomes lost while chasing a squirrel. But while Howard still seems miscast, her enthusiasm that of an adult reading a book to a small child, within the film we first meet Bella as a small puppy, giving us a chance to get used to her voice (to be fair, the actress puts a lot of playfulness and emotion into her line readings). Lucas is a medical student and volunteer at the local VA who lives with his mother Terri (Ashley Judd), a veteran suffering from PTSD, and who has an admirer in work colleague and fellow commuter Olivia (Alexandra Shipp). Olivia, an animal rights activist, may be drawn to Lucas because of his caring for a feral cat colony living across the street from his house beneath a condemned building. But that same activity has drawn the ire of developer Gunter Beckenbauer, who has already been issued a permit after animal control 'cleared out' the cat colony. We've seen that traumatic event through Bella's perspective, the pup's mother one of animal control officer Chuck's (John Cassini) catches. Bella is protected by 'Mother Cat,' one of several who evade animal control and continue to be fed by Lucas. Despite her devotion to Mother Cat, Bella feels a pull towards this kind human, revealing herself to his and Olivia's delight. The pup is rescued, Lucas' consideration that she might be good for his mother is proven correct when he has to hide the dog from his landlord and takes Bella to work where she is co-opted by his mom's group therapist (Patrick Gallagher) and is embraced by the veterans she comforts. But after Lucas and Olivia shut down Gunter's demolition permit, he uses animal control officer Chuck to certify Bella as a pit bull, illegal to own in Denver. Olivia arranges for her aunt and uncle in New Mexico to temporarily house the dog until Lucas and Terri can move outside city limits, but Bella's pull to be with her beloved master leads her to jump their fence, 400 miles from home. In one of several near misses, we see Bella trotting below sight of the road on which Lucas and Olivia are driving to reclaim her. Martin Smith stays with Bella's perspective throughout the two and a half years she is separated from Lucas, the occasional missing dog poster reminding us of his heartbreak. The screenplay makes callbacks to things Bella has learned to apply to her adventures, her distress at being separated from her own mother leading her to raise a cougar cub orphaned by hunters, her experience at the VA hospital applied to homeless vet Axel (Edward James Olmos). The film gives us two heart-stopping obstacles right at its climax, Bella's traversing of a highway to get to Denver hair raising, her memory of Lucas's 'go home' training leading her right back into the clutches of Chuck and Gunter. The filmmakers, though, have come up with a pretty clever solution, all arbitrated by Denver PD's Captain Mica (Wes Studi). While the same author's "A Dog's Purpose" was met with PETA backlash in 2017, this adaptation has taken pains to protect its animals, collaborating with the Human Society. Martin Smith has also made a better film than Hallstrom's under characterized and overly sentimental effort. "A Dog's Way Home" falls in with Disney's "Homeward Bound" movies, enriched with observations on animal rights and the value of canine therapy. Grade: