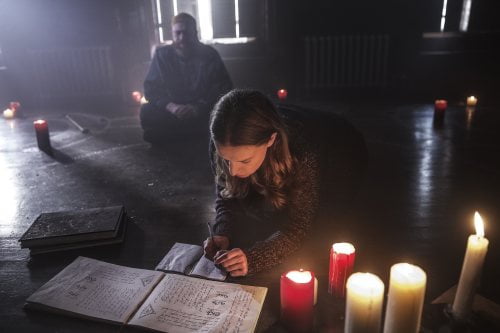 A dour determined woman visits a remote old home with a realtor and declares it perfect, agreeing to a one year lease. She brings a man to see the home, but he say it's not right, demands payment and prepares to leave. Sophia (Catherine Walker, "Leap Year") has brought him there to perform a Black Magic ritual and when she tells him her real reason for doing it, Mr. Solomon (Steve Oram, "Sightseers," "The World's End") relents, but demands complete truthfulness going forward in "A Dark Song."

The first feature film from writer/director Liam Gavin is an unusual kind of horror film. Based on a real ritual performed by occultist Alastair Crowley at Boleskin House in Loch Ness, the film goes into great detail outlining the stringent demands of the ritual intended to raise a Guardian Angel. But while there are some minor creeps along the way (I really didn't find "A Dark Song" to be particularly scary), the film is really a character study, the relationship between Sophia and Mr. Solomon providing all its tension, Sophia defined by her grief. Elaborate preparations have begun before we even see Sophia, who only eats at prescribed times and has foregone alcohol and sex. Mr. Solomon, suffering from the DTs from his own alcohol withdrawal (he admits to being a heavy drinker, presumably because of former experiences), warns that the following months will mean real angels and demons, fasting and no sleep. But the two people who have entered into this strange pact are far from comrades in arms. Mr. Solomon is already angry that Sophia initially told him she wanted to perform the ritual as kind of a love potion and even after she tells him she really needs to talk to her seven year-old son, Jack, who was murdered three years ago, he continues to accuse her of holding back. If these two don't enter the ritual in a pure state, it is doomed to fail, perhaps disastrously so. After enclosing the entire house with a line of sand, Sophia is offered one last chance to pull out, but refuses. The sand border closed, neither may leave the house. Five circles are drawn in a west facing room, a triangle created in another as a place of focus and refuge. With Sophia sitting cross legged in a circle, Mr. Solomon places a smooth stone in front of her, telling her she must focus on it. She cannot move, eat or sleep for two days. After a break for food and water, the ritual will be repeated two more times. Mr. Solomon says the dog which can be heard barking (we've only seen a decaying one on the property) and a black bird which flies into a kitchen window are signs that the ritual has begun to work. The small fantasy action figure belonging to Jack that Sophia keeps close disappears, then pops up dancing across the lid of a washing machine. Calls of 'Mummy' start to emanate behind a closed door. A hooded figure can be seen walking where Sophia isn't looking. As the ritual intensifies (sex, water torture, the drinking of human blood), Sophia unloads more information, enraging the already abusive Solomon, who says she must undergo a purification. All hell literally begins to break loose. Walker keeps us guessing as to Sophia's real intentions, early snippets of flashback and a visit with her sister confirming the loss of Jack. She's driven, but not sympathetic, her determination cold. Pale and balding with a red beard, Oram projects fierce, bullying authority with an underlying vulnerability. As these two actors' shared experiences intensify, their relationship softens, each giving the other limited comfort. After borrowing a page from "The Blair Witch Project," Gavin gets to his climax and it is both unexpected and unlike anything I've seen before, a wondrous example of what can be done with a low budget and practical effects. Sound is the eeriest component of the film, the unsettling score employing violin, cello, thumping drums and metallic gongs. But Gavin delivers catharsis, the dark arts taking us to a place of light and hope. Grade: