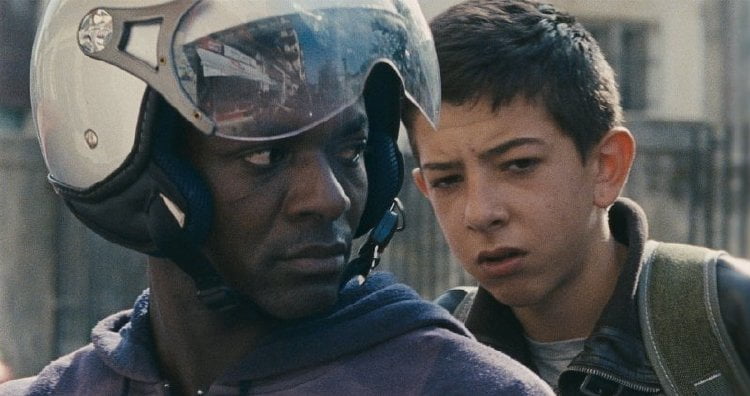 14-year old Pio (Pio Amato) idolizes his older brother, Cosimo (Damiano Amato), and mirrors his ways, including smoking and drinking and doing crime. When Cosimo is suddenly arrested in a bust, Pio thinks he is ready to fill his brother’s shoes in the adult world in “A Ciambra.”

14 year-old Pio Amato (Pio Amato) has an extensive Romani family, but it is his older brother Cosimo (Damiano Amato) he follows around, hoping to become a man by learning how to hotwire cars and process stolen copper wire. The Amatos laugh during crowded, chaotic dinners that they are 'eating like Italians' and are 'drunk like Africans.' That Pio can relate to both communities comes in handy when Cosimo and their father Rocco (Rocco Amato) are arrested. He turns to African immigrant Ayiva (Koudous Seihon, "Mediterranea") to help him earn money to support the family in "A Ciambra." Writer/director Jonas Carpignano follows up his "Mediterranea," centered on Seihon's immigrant and featuring Pio, in this touching docudrama. Carpignano has a knack for getting natural performances from his non actors (even his dad is involved as a man whose car is being held for ransom, which, incidentally, is how Carpignano originally met the Amatos when his own car disappeared) and Pio easily shoulders the film, his mother (Iolanda Amato) a master of nonverbal expression. Pio takes care of the family's stolen electricity when the police arrive, but a subsequent lapse lands them with a hefty fine, another motivator for the young man to help out his mom. He travels at night to another town to collect the ransom money for a Fiat Cosimo had taken. He boards a train, grabs a carryon and jumps off, scoring a tablet. He turns to Ayiva at the local outdoor dance club to help him sell it, learning a lesson when he fails to cut Ayiva in. At the tent city housing Sengalese, Ghanians and Burkinabé, Kingsley requests a TV. Ayiva has one in his stolen stock and Pio agrees to deliver it, lugging it all the way (the youngster is afraid of trains and refuses to ride them). He's greeted as a hero, Kingsley insisting he stay for a soccer game. Mom's none too pleased by any of this, but she accepts the cash her son hands over. When Cosimo returns, he offers to take Pio officially under his wing. Pio is thrilled, until he learns what the first thing is that is being asked of him. His decision presents two very different paths. Carpignano and his cinematographer Tim Curtin ("Mediterranea" camera operator) keep us closely identified with Pio throughout, handheld camera sequences sometimes jarringly bumpy. But there are also moments of magical realism, beautiful reflections on Romani past as experienced by Pio's grandfather and his white horse. These juxtapositions help to identify generational differences, especially as regards how outsiders are viewed (Cosimo pointedly tells Pio that while he was 'respected' in prison, the blacks were not). The score is gorgeous, folk music attuned to the film's mood. "A Ciambra" was Italy's submission for the 2018 Foreign Language Film Oscar. Grade:

Writer-director Jonas Carpignano bases his coming of age story inside the Romani community in the southern Italian town of Gioia. Pio is part of a large nuclear family presided over by his mom, Iolanda (Iolanda Amato – the cast is a true Amato family affair with many of the players bearing that family name). The gypsy enclave is a hotbed of petty (and not so petty) crime and the Amato clan is steeped in its ways-to-make-a-buck culture. Pio and his younger siblings handle the petty crimes and scams while Cosimo is part of the adult criminal world of car thefts, chop shops and worse. Pio, though, sees it as glamorous and aspires to be accepted into his brother’s illicit world. He sees Cosimo’s bust as his big chance. I cannot think of a film that immerses itself into the modern Romani culture and writer-director Jonas Carpignano does just that with “A Ciambra.” We see the multi-culture, highly ethnic world through Pio’s canny eyes as he is the only one who can easily move from one to the other of the of the town’s disparate factions – Italian, Romani and the refugee community from Africa. The cast is made up by mostly non-actors and, as I said, a large contingent of the Amato family, giving the film a familiar feeling as we watch the daily dramas, pleasures and pains of Pio and all of those around him. Pio Amato is a natural, chain smoking, hustling and always looking for the quick buck. Iolanda Amato, as the boy’s mom and family matriarch, in a short onscreen time, conveys real motherhood. She may be radically different from my own mom, but the role is well played. “A Ciambra” is the Italian entry for the Best Foreign Language film for this year's Oscars but did not make the short list. That does not mean it does not deserve your attention. It does and it opens a window into a culture, the Roma, which I was near totally unaware of, until now.