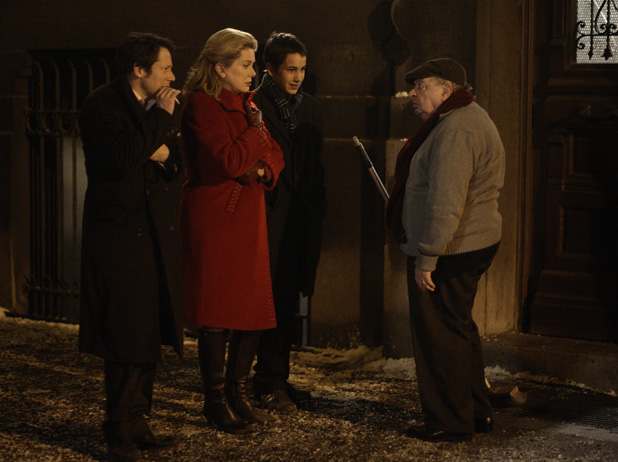 The Vuillard family shares a common brilliance, mental illness, physical debilities, fractured emotions and estrangement from each other. But, the Christmas holiday is approaching and patriarch Abel's (Jean-Paul Roussillon) biggest desire is to reunite his troubled family in "A Christmas Tale."

The Vuillards have a codependent and incompatible family history, but when the disease that took away Junon (Catherine Deneuve, "Belle de Jour," "Changing Times") and Abel's (Jean-Paul Roussillon, "Kings & Queen," "Free Land") first child Joseph at the age of 7 resurfaces in her decades later, a troubled grandchild begins to cross divides in order to reunite them for the first time in over five years in "A Christmas Tale." Cowriter (with Emmanuel Bourdieu, "Poison Friends")/director Arnaud Desplechin ("Kings & Queen") has a magical way of letting movies unfold, letting his characters rhythms and non sequiturs touch and amuse you as he pulls his story strands together. With "A Christmas Tale," Desplechin has created a classic, a sprawling dysfunctional family holiday film where the past echoes into the present and hints at the future and marriages are taxed in sickness and health and reflected in their children. His and cinematographer Eric Gautier's ("Into the Wild") fancifully old fashioned camera tricks, a wildly inventive soundtrack featuring everything from Mendelssohn’s “A Midsummer Night’s Dream to baroque jazz, and references from "The Ten Commandments" playing on TV to Angela Bassett's derriere make "A Christmas Tale" like a stocking stuffed by the most inventive and mischievous of gift givers. Elizabeth, (Anne Consigny, "The Diving Bell and the Butterfly") was the eldest child after Joseph now a playwright and Henri, the middle child (Mathieu Amalric, "The Diving Bell and the Butterfly," "Quantum of Solace") conceived to save him, arrived too late to do so and has since become the family's black sheep. When Henri's business debts, guaranteed by his father, land him in court, Elizabeth clears them on condition that he be banished from the family. Youngest brother Ivan (Melvil Poupaud, "Broken English," "Speed Racer"), a DJ/musician, is a peacekeeper, but cannot heal this rift. Only cousin Simon (Laurent Capelluto), a painter who was brought up with the family when Junon's brother died, maintains connections to every family member. Rift established, we will see Elizabeth is depressed and her fifteen year-old son, Paull (Emile Berling), is so disturbed he points a knife at his mother, then attempts to jump off a balcony. Uncle Ivan arrives at the psychiatric hospital brandishing his good nature and the extended family's drugs of choice, booze and cigarettes. Henri is a raging alcoholic who falls down in the street. Paull tests as a compatible marrow donor for Junon but father Claude (Hippolyte Girardot, "La Moustache," "Flight of the Red Balloon") doesn't like the idea. Simon travels by train to the Vuillards's Roubaix manse with Ivan and his wife Sylvia (Deneuve's daughter Chiara Mastroianni, "Carnage," "Love Songs"), whose children Basile and Baptiste (Thomas and Clément Obled), add to the Roubaix madness by hunting the wolf, Anatole, who presumably lives in their grandparents' basement. Last to arrive, in the middle of the night, is Henri, with a surprising bombshell, Faunia (Emmanuelle Devos, "Read My Lips," "Kings & Queen"), on his arm. Turns out, Henri has also tested compatible as a donor, news that upsets Elizabeth who sees her son as her mother's savior. On the days leading up to Christmas, amidst much smoking and drinking, the family reconnects, fights (literally!), buy and wrap gifts and debate the merits of Junon's treatment which may be more harmful than not. Junon rises above the fray, frank about her family favorites (she tells Faunia she does not like Sylvia because she took her baby boy but likes her because Faunia took the 'one she doesn't like'), keeping her gaze into the future cool. Abel revels in having his family around and bristles at Junon's medical decision. The arrival of his late lesbian mother's lover, Rosaimée (Françoise Bertin, "The Flower of Evil," "Hunting and Gathering"), sparks more family intrigue when she tells Sylvia that 'the three boys' decided she would wed Ivan. The joy in Desplechin's story is how all the family members' stories keep folding in upon one another with multifaceted ties that bind. Henri, the child conceived to save a brother becomes the potential savior of his mother. The son lost to Junon as an abstract sick child in Paris with his father is ever present in family photographs, his grave visited on Christmas Eve. Even in casting, Deneuve's daughter becomes a daughter-in-law, involved in different ways with three men of the family. The depressions and alcoholism in the family are leavened with artistic ability and imagination. The titular Christmas Tale, a Christmas Eve play put on by Basile and Baptiste, is a screamingly hilarious and profane reflection of the Vuillard family accompanied by Abel's guitar which Junon gets a big kick out of. Junon refers to Henri as her 'little Jew' before it is revealed that Faunia will leave before Christmas, her Jewish family preferring to celebrate their lack of celebration. The film looks and sounds beautiful. Snowflakes fall outside an old family home bursting with the stuff of generations. Iris shots are used frequently, giving the film the old world feel of "A Christmas Carol," and superimpositions, such as a heart pendant twirling over a background of Roubaix, are like nostalgic postcards. The soundtrack is equally magical from fairy tale classical to the discordant jazz playing in Abel's study to Ivan's DJ scratching at a Roubaix discotheque and the somber dirge that accompanies a microscope view of Junon's blood cells. The ensemble cast clicks and clacks together, the regal Deneuve the unflappable matron of dry wit while Consigny is her fretting, obstacle building opposite. Roussillon is the classic elder Frenchman (he bears some resemblance to Claude Chabrol), Poupaud the naive romantic, Capelluto the brooding romantic. "Kings & Queen" costars Amalric and Devos are as eccentric as the film itself. Mastroianni positively glows.

French animation, in recent years (starting with the sublime “The Triplets of Belleville (2003)”), has been on the fast track with the deft combination of storytelling and classic anime (3D has not corrupted the craft, yet, in France). Directors Jean-Loup Felicioli and Alain Gagnol have created a work that continues the Nouveau Anime movement (I just made that up) and does so with a truly original and exciting story. Zoe, grieving over the loss of her father, has not uttered a word since his death. Her mother, Jeanne (Dominique Blanc) is the police officer heading the investigation that, she hopes, will put Costa behind bars for a long, long time. Nico leads a solitary life, spending his nights prowling from one roof to another looking for an easy burglary with his companion. Dino will become the catalyst that will bring Zoe, Jeanne, Nico and Victor Costa and henchmen together in a thrilling climax. “A Cat in Paris” is animation, yes, but the story, its many threads and mature theme is aimed squarely at the adult and older teen audience that can appreciate a stirring drama in anime form. The fluidity of the animation, especially as Nico and Dino effortlessly and lithely cruise the Parisian rooftops, coupled with its great story (by Alain Gagnol) make “A Cat in Paris” a pleasure to watch. There are no laughs but there is a whole lot of sympathy for the well-voiced characters – except, of course, the despicable Victor Costa.