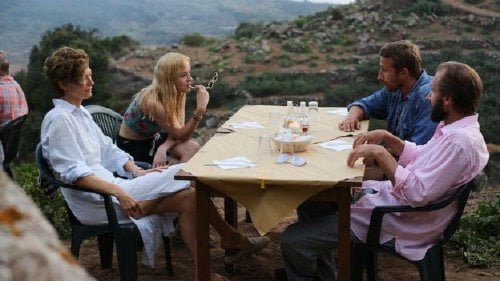 Paul (Matthias Schoenaerts) is caring for his partner, rock star Marianne Lane (Tilda Swinton), as she recuperates from vocal surgery on Pantelleria, a volcanic Italian island off the coast of Tunisia. Their quiet idyll explodes when her ex, hard-partying record producer Harry (Ralph Fiennes), arrives with his seductive daughter Penelope (Dakota Johnson) to make "A Bigger Splash."

Tilda Swinton reteams with her "I Am Love" director Luca Guadagnino in this sun-soaked meditation on desire made more combustible by his foursome's intertwined pasts as well as differing needs, age, status and levels of self control. Screenwriter David Kajganich, adapting Jacques Deray's 1969 La Piscine, keeps us reading between the lines, Guadagnino noting hidden glances and observations. Swinton, who redesigned her character by adding a doctor mandated ban on speaking, capitalizes, her rare vocalizations that much more powerful. After an establishing shot of the Bowiesque Lane entering a packed arena, we cut to her divested of all her rock trappings, sunbathing nude with Paul far from her fans. Their serenity is interrupted by a phone call from the excitable Harry, reporting that he's about to land. The two sit up astonished as the shadow of his plane passes over them. Paul's obviously more put out about this turn of events as the two drive to the airport. A jubilant Harry whisks Marianne into a dancing hug, then introduces the young beauty who sidles up beside him. She is the daughter he only recently learned about. Jabbering on about his love for Pantelleria, he introduces the other three to a hidden al fresco restaurant on the side of a hill. It looks glorious, but it's full. As Harry seeks to use his clout, a table of four starstruck men recognize Lane and give up their table for her party (one will come back into play in a most unexpected way). As the foursome leaves, Marianne invites Harry and his daughter to stay. Paul grimaces. Over the next few days, subtle shifts occur. Marianne and Paul find themselves hosting a party not-of-their-making as Harry's 'guests' arrive. Shuffling through stacks of vinyl, Harry reminds them of his role in rock history with a Rolling Stones production anecdote (Ralph Fiennes dancing to 'Emotional Rescue' is sure to be one of 2016's cinematic highlights). But as Marianne delights in Harry's company (her wardrobe morphs from shabby chic to elegant Dior), Paul, initially wary, spends more and more time with Penelope who clearly has her sights set on him (kudos to costume designer Giulia Piersanti, who suggests Sue Lyons' Lolita with Penelope's white framed sunglasses). By the end of this vacation, only three will be left standing, one caught in lies, another confessing. When he's not celebrating local foods and views, Guadagnino suggests trouble in paradise with the snakes attempting to slither into Lake and Paul's Eden. He uses flashbacks to unravel Marianne, Harry and Paul's knotty past. The film's soundtrack is extraordinary, using Harry Nilson's 'Jump Into the Fire' and Popol Vuh's 'Aguirre' as motifs, Captain Beefheart's 'Observatory Crest' and the standard 'Unforgettable' for singular scenes. Each member of the primary cast is coming from a very different place. Swinton's Marianne is a celebrity powerhouse possibly considering a quieter life with Paul (it is unfortunate that Guadagnino's one flashback to Lane at work belies her reputation). The actress's remarkably animated face conveys what her voice does not. A last act development involving refugees will make us reconsider how we feel about her. Fiennes is the engine, here, though, joyous (and frequently nude) yet unsettled, a 'character' known wherever he goes, but one who is also reconsidering life, regretting his having 'given' Marianne to Paul. Schoenaerts is quieter, his lesser celebrity and suicidal past making him vulnerable. Johnson is the wild card, manipulating those around her with her sexuality. They form a very charged quartet. Guadagnino's "A Bigger Splash" is an adult relationship drama that courses from calm to gaiety to darkness under the Mediterranean sun. Grade: