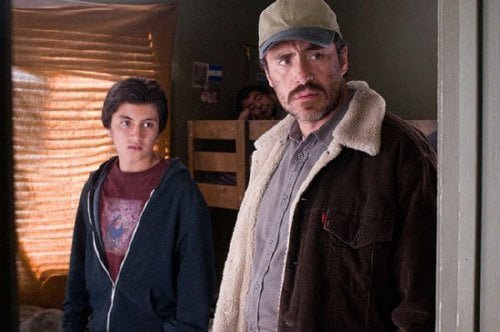 Carlos Galindo (Demian Bichir) is a hardworking illegal Mexican immigrant who wants only to give his son, Luis (Jose Julian), a life away from poverty, gangs and drive-by shootings. There is a glimmer of hope for the man when his boss, Blasco Martinez (Joaquin Cosio), offers to sell Carlos his landscaping business. For the fist time in his life of constant struggle, he can think, instead of just dream, about making “A Better Life.”

Carlos Galindo (Demián Bichir, "Hidalgo," "Che") brought his wife and baby boy into California illegally from Mexico, but his wife soon found she wanted more from America than he was able to provide. Now, years later, Carlos risks everything in order to assure that his son Luis (newcomer José Julián), who is becoming more and more distant culturally from his dad, will have "A Better Life." Director Chris Weitz ("About a Boy," "New Moon") has had an odd career, an up and down path between some good indie fare and some not so great commercial fare. In taking on this story by Roger L. Simon (screenplay by "Manito's" Eric Eason), Weitz, who is of Mexican ancestry, has delivered his most personal and best film to date. This nod to neo-realism begins like a male "Mildred Pierce" before segueing into a second half that plays like a modern "Bicycle Thieves." Weitz's opening shot, contrasting the world where Carlos works with the one where he lives as he commutes home, may be obvious but it is beautiful and effective (cinematography by Javier Aguirresarobe, "The Others," "New Moon") and this is how his entire film plays. Carlos and Luis live in a small but neat bungalow in East L.A. where Luis occupies the only bedroom and dad sleeps on the couch. For years, Carlos has worked for Blasco (a nod to "Bicycle's" Baiocco?), avoiding the daily cattle call of illegals looking for work outside a gardening supply center, but now Blasco wants to retire and is pressuring Carlos to buy his truck and be his own man. But Carlos blew all his savings on a lawyer who promised him papers and didn't deliver, pretty much the story of Carlos's life. After a day without Blasco finds him alone on the corner sharing another rejected old workman's doughnut, Carlos decides to ask his sister Anita (Dolores Heredia, "vantage Point"), a married nurse whose life has been more upwardly mobile than his, to borrow the $12K. Meanwhile Luis is a sullen entitled teen who doesn't appreciate what his dad goes through for him. He goes to a high school which looks like a maximum security prison. His girlfriend Ruthie (Chelsea Rendon, "Nine Lives") is a tough chick whose entire family is mired in L.A. gangs and his best friend Facundo (Bobby Soto) sees becoming a member as his only way out. When dad shows up one day beaming, driving the new truck, Luis isn't as impressed as he should be, nor does he understand why dad's gifted him with a soccer shirt. He's somewhat amused to find dad sleeping with all his new gardening equipment in the living room, but the next night what he finds turns his entire parental paradigm on its head - his father is drunk, his truck and equipment stolen by that old man with the doughnut Carlos sympathetically hired his first day out as boss. Up until this point, it is difficult to empathize with Carlos's unconditional love of his son, but Carlos's plight flicks a major switch in Luis. He sees his dad as naive and vulnerable and wants to protect him, so the two set off to find Santiago (Carlos Linares, "Indiana Jones and the Kingdom of the Crystal Skull") and begin an odyssey that will take them into South Central where illegals live stacked like cordwood in too small apartments. The path to Santiago also brings them to the doorstep of the Congresso Nacional Charro rodeo, where Carlos can show his Americanized son his true roots. Luis, essentially, gets a full blast of both the best and worst of his dad's life. When the duo finally track down the truck, Weitz goes into action thriller mode and we coast on the rush Luis feels to see his dad act so uncharacteristically, but it doesn't take long for the bad luck of good men to once again catch up with Carlos. Demián Bichir is a superstar in Mexico and he is perfection as this good and loving man who is cautious to a fault because of his immigration status. If not for the truth in his performance, the film could have become cloying. Newcomer Julián has natural screen presence and works well with the experienced Bichir. Weitz's production is terrific, differentiating three quadrants of L.A. while contrasting three cultures - the rich who pay little heed to the immigrants who work for them, those immigrants, and, lastly, their offspring who have been fed more via a culture alien to their parents than that of their heritage. But Weitz does fumble. In the crucial scene where everything goes from great to grim for Carlos, the director both shows his hand too earlier and misdirects Santiago's motivation. It's an awkward scene at a pivotal point in the film. Still, he captures a charismatic gang member whose body tattoos travel so far up his neck his head seems to float, a surreal, lasting image, and his organic way with the daily interactions of a father and son standing on opposite sides of a fence makes their facing of real fences later in the film all the more powerful. "A Better Life" is a strong, small film, on a level with "Sugar," the baseball player immigration story of a couple years back. The subject matter may not sound sexy, corny even, but Weitz has invested it with a real and honest heart.

As I sat and watched this well-done father-son drama, I was struck by how similar (if not identical) the story, near the half-way mark, is to Vittorio De Sica’s 1948 noir classic “The Bicycle Thief.” The main difference between the two films is that a pick-up truck replaces the bicycle as the object of desire by the long suffering protagonist. However, I do not think that “A Better Life” a rip-off of a classic story but an honest homage by director Chris Weitz and scripter Eric Eason to that great film of so many years ago. Carlos, it is obvious from the start of “A Better Life,” loves his son, Luis, and is devoted to protecting the boy from the harsh reality of life in East LA. The man toils long hours, day after day, scraping together the meager pay his illegal status will allow. He travels by bus across the city from the crime-riddled streets of his neighborhood, where a violent crime or police bust is a daily event that goes unnoticed, to the Promised Land of Beverly Hills where he can only look at the luxurious homes from afar. When Blasco decides to retire, he promises Carlos a good deal on his truck and business. But, without any money, he cannot possibly afford the sweet offer. He turns to his working class sister who gives him her secret nest egg. Suddenly, the dream of a better life becomes a possibility and the newly minted boss is now in a position to hire other laborers (illegal, of course) and take control of his and Luis’s future. This is where the truck replaces the bicycle when one of his hired hands steals his truck, his tools and his livelihood. This an earnestly told story that shows the tough life lived by Carlos and Luis, who is also being pressured by his best friend to become a gang banger, get tattooed and begin a life of crime. But, even with everything, and I mean everything, going wrong in their life, the film ends on a surprisingly hopeful note despite its almost relentless grim drama. The solid efforts, by all before and behind the camera make “A Better Life” worthwhile. It is not “The Bicycle Thief,” but that is okay. “A Better Life” earns praise for retelling a classic story of survival and the love for a father for his son in the New Millennium.