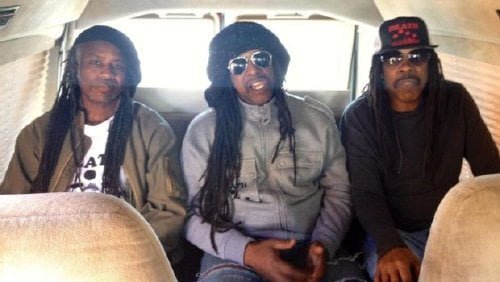 In 2008, a San Francisco record collector was thrilled to find on of 500 singles pressed by an obscure band. He paid $800 for it. Interest was picking up and when a teenager from Detroit travelled to the city, he met a girl into undiscovered music who told him about the amazing 70's group who had been playing punk years before the Sex Pistols and Ramones. When Julian Hackney heard the track he was flabbergasted to hear his musician dad's voice and only then found out his dad and two uncles had formed "A Band Called Death."

This documentary about an unlikely Black trio who recorded punk music before its time only to be recognized decades later starts out like gangbusters as we meet the two surviving brothers, Bobby and Dannis, and their extremely close knit, gregarious family. They tell the tale about how their Baptist minister dad inspired them by making them watch The Beatles on TV, inspiring Bobby to pick up the bass. When second eldest David (eldest brother Earl was not in the band) went to see The Who, he knew that that was the type of music they needed to play and the trio, with David on lead guitar and Dannis on drums, began to make music in a small, cramped bedroom, supported by mom, if not their neighbors. It was their father's tragic, accidental death that led David to name the band Death, not from a heavy metal perspective, but a spiritual one. David felt guided by God, a triangle seen in the clouds a guiding symbol to become their logo. But even though they got a local production house to record their music, all attempts to get a contract failed but one - from Clive Davis no less - if only they would change their name, a major stumbling block with everyone who heard them. David refused, eventually sliding into the life of an unfulfilled alcoholic dreamer who died in 2000 from lung cancer. David always insisted their music would be sought out one day and insisted Bobby store their master recordings. Bobby and Dannis went on to perform in many bands from their new home base of Burlington, VT, a reggae group they formed becoming somewhat successful. But when they heard Julian's astonishing news from San Francisco, Death become viable once more. The film tells a great tale, but following on the heels of such works as "The Story of Anvil" and "Waiting for Sugarman" gives the doc an also-ran aura. Directors Mark Christopher Covino and Jeff Howlett bog down their story, running on a good 15-20 minutes longer than was good for the movie, repetition setting in. Worse is their focus on the deification of David, a member of a trinity dying for its 'sins' and a prophet when his latter life seemingly whitewashed, his wife Heidi interviewed separately and never mentioned by the Hackney clan. "A Band Called Death" is at its best when it focuses on the Hackney family as a whole, Bobby and Dannis's kids following in their footsteps (Bobby jokingly berates Dannis when all his kids want to be drummers). You can feel the love when a recording of an old childhood prank - a call to mom disguised as a martian requesting assistance - is played and we hear mom's exasperated response. As for Death, they had a few good songs which sound undeniably punk, incredible for Black kids in Motown era Detroit influenced by Britrock, but their much of their limited output sounds amateur next to the likes of "Sugarman's" Rodriguez, who completed two albums. There's a good documentary in here, but it's been weighed down by highlighting pretentious claims and lack of a good edit.