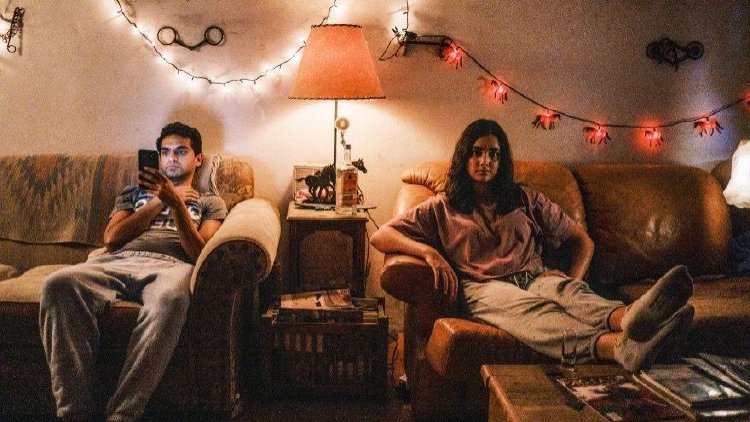 Rita (Geraldine Viswanathan, "Blockers") quite clearly has nothing in common with Ravi (Karan Soni, "Deadpool 2"), the young man who’s worn medical gloves and a face mask for an arranged date picnic in a half empty reservoir.  When the pandemic grounds planes and forces a lockdown, Ravi is equally horrified by Rita’s lifestyle when he’s forced to stay with her, but a lot of things can change in “7 Days.”

Cowriter (with star Karan Soni)/director Roshan Sethi’s directorial debut, which just won the ‘Best First Feature’ Independent Spirit award, is formula through and through but when a romantic comedy features two stars who click both with the audience and each other and a script that’s both culturally specific and universal, you have an assured crowd pleaser.  “7 Days” is a bit of an inverse of “The Big Sick” – where that film saw traditional Muslim Pakistani breaking off his mixed race relationship in deference to his parents until his beloved’s hospitalization puts everything into perspective, this one features two traditional Indian moms pushing kids together who initially repel each other until, yep, a third act hospitalization puts everything into perspective.

Pandemic films are already becoming stale, even when they don’t directly address the subject, but Sethi and Soni use the situation not only to drive the plot, but for comedy and characterization, and suddenly we find ourselves invested in Rita and Ravi instead of COVID and isolation.  If Rita found Ravi’s fastidiousness ridiculous, imagine his horror as he steps inside a house covered wall to wall in dirty dishes and old takeout containers, an empty beer bottle on the floor belying Rita’s claims of being a non-drinking vegetarian.   Ravi soon learns that Rita’s ‘traditional’ dating profile (her hobbies include ‘caring for future in-laws’) as well as her participation in arranged dates are a sop to her mother, who pays for her apartment.  He asks if he can clean because it ‘calms him.’  And things get worse before they get better.

Viswanathan is a natural comic with her almost constant look of mild surprise at everything going on around her, making her laid back portrayal the perfect foil for Soni’s uptight geek.  He gets his first laugh out of her impersonating a misogynistic uncle and multiple laughs out of us sporting a series of her tee shirts, all bearing feminine slogans.  His and Sethi’s screenplay make multiple callbacks to such things as Australian sailors, ringing bells and Rita’s art works evoking different emotions each and every time.  Production design and art direction make Rita’s chaos characteristic with everything from the plastic horses adorning a bookcase to an unconcealed and brilliantly colored vibrator.

“7 Days” illustrates how opposites can expose each other’s limiting behaviors, opening horizons of set minds.  That it does so while making us laugh and making us care marks “7 Days” as a superior romantic comedy.

It is March of 2020 and Ravi (Karan Soni) and Rita (Geraldine Viswanathan) are both from “traditional” Indian families where the parents select suitable dating partners for their children. But one of the potential young couple drinks liquor, eats meat and eschews the traditional ways and it is not who you might think in “7 Days.”

Made in 2021, this COVID-19-influenced yarn written by Roshan Sethi and Karan Soni, directed by Sethi, begins just before the lockdown way back when. The possible couple is on a get-to-know-you blind date and Ravi comes on way too strong with the very laid-back Rita, presuming a long relationship – traditional, of course – with three children. I think you can guess which side Rita might be on.

Then, the text alerts from the government and the shutdown hits just as they are about to part not-so-amicable ways. Shelter-in-place becomes the new way of life and a clash of personalities begins. This is where the irresistible force meets the immovable object as their very different personalities and ways-of-life clash.

Where this whole COVID-19 rom com works best is with the possibilities of Rita and Ravi as a couple. Nothing is assured as this amusing “drama” plays out – do opposites attract? There is, though, great chemistry between the two actors and we get to appreciate a very different way of life, like parental arranged dating and marriage.