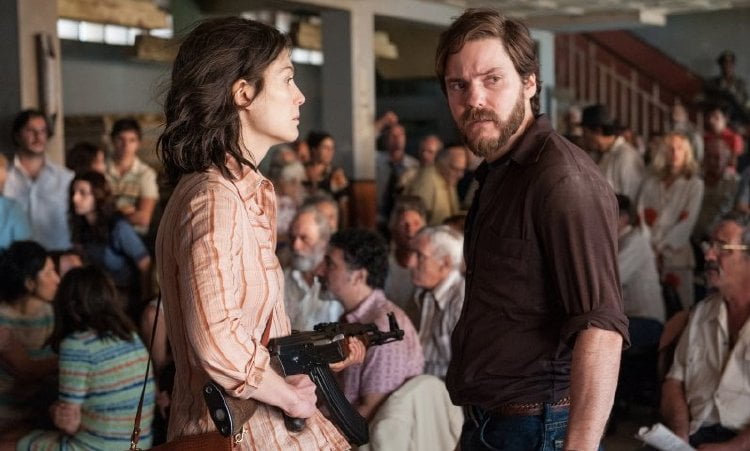 On 27 June 1976, Air France flight 139 left Tel Aviv bound for Paris via Athens. In Athens, 58 additional passengers boarded, including four hijackers who take control of the aircraft. Their final destination and the fate of the Israeli hostages would be decided during “7 Days in Entebbe.”

German leftist revolutionary Brigitte Kuhlmann (Rosamund Pike) is fearful that their movement is dying and guilty over her perceived part in the capture and death of founder Ulrike Meinhof. She wants her life to have meaning and believes that standing up for oppressed Palestinians by joining in the hijacking of an Air France flight is the right thing to do, even though Juan Pablo (Juan Pablo Raba, "The 33") points out that Germans potentially killing Jews is an extremely problematic scenario. When she and her partner Wilfried Böse (Daniel Brühl) team with two Palestinian Freedom Fighters, they will both rethink their philosophies during "7 Days in Entebbe." In addition to breaking events down into the seven days commencing on June 27, 1976, screenwriter Gregory Burke ("'71") grounds the action from four main perspectives, that of the terrorists, an Israeli Government where PM Yitzhak Rabin (Lior Ashkenazi, "Norman," "Foxtrot") is at odds with Defense Minister Shimon Peres (Eddie Marsan, "Atomic Blonde"), the airline crew represented mainly by flight engineer Jacques Lemoine (Denis Ménochet, "Inglourious Basterds") and the composite character of Zeev Hirsch (Ben Schnetzer, "Snowden"), one of the Operation Thunderbolt rescuers. Director José Padilha ("Bus 174," "Elite Squad") frames everything through the chair dance sequence from 'Echad Mi Yodea,' a 1990 work by Israeli choreographer Ohad Naharin that may be anachronistic, but powerfully symbolizes his theme. Those looking for a straight out action film should look elsewhere (1977's TV movie 'Raid on Entebbe' or the Klaus Kinski starrer "Operation Thunderbolt" to name two), as these filmmakers are more interested in peering into the grayer areas of politics. Some are sure to be offended at the portrayal of Kuhlmann and 'Bosi' as wrong-headed idealists, but Bosi, portrayed here as betrayed when their Palestinian counterparts who demanded separation of Israeli passengers, has long been credited with telling the Israeli hostages they'd vowed to kill to take cover, aiming only for Israeli soldiers. Once the Air France flight with 248 passengers traveling from Tel Aviv to Paris has been hijacked after a stop in Athens, we see Rabin receive the news during a cabinet meeting. He scribbles a note asking 'How many Israelis on board?' (83) 'How many hijackers?' (4) and 'Where are they going? Flashbacks illustrate Kuhlmann and Bosi's rationalization in Frankfurt and training in Yemen. In Tel Aviv, Rabin considers negotiation while Peres is adamant that a rescue mission is their only option, both men's political futures at stake depending on the outcome (the terrorists were demanding the release of Palestinian militants held around the globe). Bosi, who decries Nazism at every turn, comforts a Holocaust survivor who is later seen on board a bus taking away a group of released non-Israeli hostages. The film is essentially a series of conversations occasionally jolted by action. In addition to the German terrorists and Israeli government, we also see Bosi talking to Lemoine as the flight engineer attempts to fix a plumbing issue at Entebbe, the older man appealing to Bosi's better nature. Israeli General Motta Gur (Mark Ivanir) presents plans for the raid on Entebbe, led by Yoni Netanyahu (Angel Bonanni). Idi Amin (Nonso Anozie, "Cinderella," TV's 'Zoo'), in league with the Palestinians, warmly greets the hijackers, then negotiates with Israel (the film fails to clarify Israel's controversial relationship with the notorious dictator). Zeve's relationship with chair dance principal Sarah (dancer Zina Zinchenko) is the film's weakest link, an unnecessary attempt to tie the symbolic dance into the film's story. A final phone call made from Entebbe airport by Kuhlmann to Juan Pablo (the phone is revealed to be non-functioning) is an overtly sentimental ode to the death of idealism. "7 Days in Entebbe" is a thought-provoking revisiting of one of the most successful rescue missions ever mounted, but its attempts to show multiple points of view still leaves us with questions. After the terrorists agree to extend their deadline for negotiations, they seemingly have no input to said talks. Instead, they conclude Israeli troops are on their way and prepare for battle. Innocents are saved, but the same situation exists forty years later. Padilha's cast is excellent, but his mounting of Ohad Naharin's rousing movement says more than the words Burke has given them. Grade:

Way back when the hijack by members of a PLO splinter group and two Germans from the Revolutionary Cell took place over seven days in 1976, the international movie making machine jumped on the event. In short order, there were three films in the works: “Victory at Entebbe (1976)” with an all-star American cast, “Raid on Entebbe (1976)” and “”Operation Thunderbolt (1977),” the Golan-Globus production and my favorite, starring Klaus Kinski as the lead hijacker. It has been 42 years since the most spectacular hostage rescue, ever, took place, so it must be time to tell the story once again. Director Jose Padilha and screenwriter Gregory Burke tackle the subject in an earnest way, though I question just why they bothered. Wait! I just thought of the answer: no-one who remembers the event really care about a modern update. But, a new, younger audience might! The production, from start to finish, is ably handled by the filmmakers in recreating, in detail, the events that unfolded in the abandoned airport terminal building in Entebbe during the summer of 1976. The crisis is given even shrift as it channels between the hostage situation and the Israeli government machinations handling the crisis. Daniel Bruhl and Rosamund Pike play the idealistic German revolutionaries, Wilfried Bose and Brigitte Kuhlmann, who, at first, think they are in control of the situation. In fact, though, the Palestinians terrorists are in charge and demanding $5 million ransom and the release of 53 PLO militants from Israel. The snag is, the Israeli government’s firm policy is no negotiating with terrorists. “7 Days in Entebbe” sticks to the facts about the hijack, the hostages and their captors and the Israeli government plans to end the crisis with military intervention. The production, from the hijacking itself through to the rescue and aftermath, is solid in storytelling, acting and design and pays attention to the details. I have one problem with the screenplay, though. There is a side story between one of the commandos and his dancer girlfriend that is a distraction and unnecessary, except for one thing. That thing takes place during the film’s climax and, though I will not give it away, makes for a visual juxtaposition that is powerful.