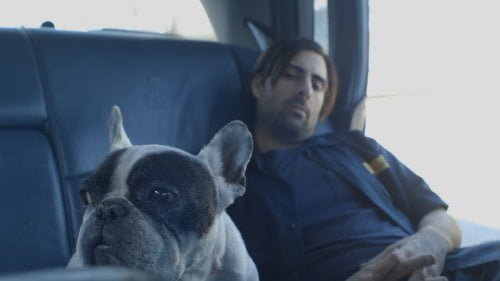 Larry (Jason Schwartzman) is the definition of a slacker as he drinks on the job, steals booze and tips and, of course, is fired. He takes his old clunker in to QuickLube for an oil change where he meets pretty manager, Lupe (Eleanore Pienta), and wheedles a job, the first in his life that he likes in “7 Chinese Brothers.”

Larry (Jason Schwartzman) is a booze-addled slacker who keys the car of coworker, Don (Jonathan Togo, "Mystic River"), after losing his job at Buca di Beppo for stealing tips and alcohol. When he takes his ancient Lincoln to the same mini-mall's Quick Lube, he falls into new employment and something like love with his new boss Lupe (Eleanore Pienta) in "7 Chinese Brothers." Writer/director Bob Byington's slight slice of life comedy leaves his antihero pretty much where he found him. But if you're a fan of Schwartzman's, you'll get plenty of his patented slow burn reactions and fast wit. Even better, he costars with his own dog, Arrow, a French bulldog with little energy but loads of personality. Larry never seems to learn, exasperating his last living relative, his grandmother (Olympia Dukakis, "Moonstruck"), whose assisted living aide Major Norwood (Tunde Adebimpe, "Jump Tomorrow," "Rachel Getting Married") is also Larry's best friend. Largely because of Lupe, Larry flourishes at Quick Lube despite his quirky behavior, but theft raises its head again, Lupe's ex Jimmy (Jimmy Gonzales, "Taken 3") shaking other employees down for cash grabs from customer cars. Even worse, lady killer Norwood vies for Lupe's attention. And Don's out for revenge. "7 Chinese Brothers" doesn't appear to be saying much of anything. Larry, who's initially looking for cash from grandma doesn't appear to care when a large amount that should be his ends up in another's hands. There's also a rather inexplicable scene where he chucks the contents of his apartment, including his refrigerator, into a dumpster. But the film has its charms, like an odd bit of pedestrian road rage that turns into a philosophical discussion about 'lesser pandas' (with his "Listen Up Phillip" director Alex Ross Perry) or the casting of a rabbi for his resemblance to Schwartzman. Even so, Byington could have made a Youtube video of Schwartzman just talking to his dog and the results would have been much the same. Good thing they're such amusing company. Grade:

This oddball little comedy by writer/director Bob Byington is a showcase for Schwartzman but the show stealing star of “7 Chinese Brothers” is Arrow, the actor’s own French bulldog. The adorable pup only has to snort or snore to make you smile. The one-sided conversations between Larry and Arrow – Larry does all the talking, of course - are priceless and are some of the best moments in the movie. The rest of “7 Chinese Brother” is a slice of life study of a true slacker as Larry shuffles around trying to find the meaning of life. He visits his grandma (Olympia Dukakis) in an assisted living facility, where he buys drugs from his friend, Major Norwood (Tunde Adebimpe), then it is off to work for Larry. He has a crush on Lupe but does not pursue it and is having a feud with a former workmate for keying the guy’s car. Do not expect action and adventure, but that is okay, the film is that quirky and likeable. Nothing much really happens in this only 76-minute long comedy and it unfolds in a leisurely fashion but is always amusing and light at heart. And, it has Arrow.