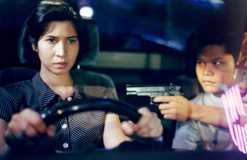 A young Bangkok woman, Tum (Lalita Panyopas), is fired from her job and returns home, penniless, with a bleak future. She hears three knocks on her door but when she opens it, no one is there, just a box left on the floor – a box containing $25,000. It’s the answer to her prayers and she decides to keep the loot, until two thugs arrive on her doorstep looking for their money. Thus begins a tale of ill-gotten gains, an ever-increasing body count, amusing gangsters and an unassuming young woman at the center of the mayhem of 6ixtynin9.”

Thai filmmaker Pen-Ek Ratanaruang, whose “Last Life in the Universe” launched him as an internationally acclaimed director, proved his talents with his earlier black comedy, “6ixtynin9.” The title refers to the innocuous little apartment number “6” that, for want of a simple nail, launches a killing spree that approaches mass murder proportions. The gangsters see the aforementioned “6” after it slips over, because of a missing nail, to become a 9,” leave the package of money, as instructed, in front of the apartment door, knock thrice and leave. Tum finds the money but is unsure what to do. When she leaves the flat, she unconsciously turns the door number back to its correct position as she locks up. The pair of gangsters find the real apartment number 9 but no money. They question a neighbor in front of Tum’s door just as the 6 turns, once again, into a 9. They lay in wait inside for Tum’s return but are not ready for the diminutive young lady when she turns the tables on them and they end up dead. This begins a steady build up as more gangsters are sent to the scene and end up dead, too, with Tum stoically attempting to clean up the mess only to have things, inexorably, grow worse with others joining in as part of the body count. “6ixtynin9” is darkly funny, tongue in cheek humor that shows the ingrained talent of its director and his deft hand at the helm.