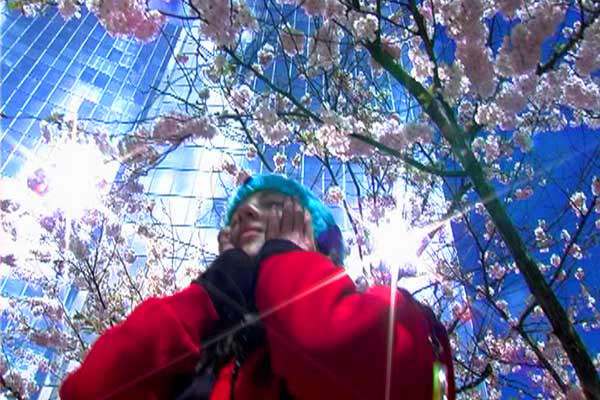 Teenaged Nat (Marie Burgun) lives with her hyperactive, status conscious mother Margot (Florence Thomassin, "A Very Long Engagement," "Tell No One") and Margot's lover Michel (Pascal Bongard, "13 Tzameti," "Actresses") who is obsessed with Margot and wants the world to know it - Michel has a video camera running constantly and the images it records are posted on their website. In order to get away from the madness, Nat retreats to her room and her computer where she watches the broadcast perversions of Simon (Mathieu Amalric, "The Diving Bell and the Butterfly") and has a relationship with Adrien (Hadrien Bouvier) whom she only knows as her partner in a virtual reality game. Nat tells Adrien that she has figured out that there are "57,000 Km. Between Us."

First time director Delphine Kreuter, who cowrote her feature with Emmanuel Finkiel and Mathieu Lis, will certainly strike some as such with her noisy, jerkily hand held, 'everything but the kitchen sink' approach, but there is method in her madness and payoff for the patient. The filming techniques employed to introduce Nat's dysfunctional family (which also includes two younger, presumably adopted, sisters and a showbiz grandma) are annoying so that we may experience the life Nat is trying to flee. As Kreuter spirals inward, giving Nat and Adrien's central story more and more focus, the picture settles down (the difference between Michel's camera and the stability of webcams) and things begin to click. At its onset, we're thrust into the claustrophobic environment of the crowded family car with stressed out parents and restless kids. A GPS system isn't helping them find Margot's mother's house in a new housing development. Nat's need to bust out of the family unit and rebel is first hinted at when she informs mom she forgot the cake, then retracts the statement as a 'joke.' The joke's on us when Grandma's house is found. A heavily made up woman in a sequined showgirl outfit performs a new number from the show that's been 'pushed up.' Michel videotapes passersby out a window. Margot criticizes the 'fakeness' of the new home, then serves up a grocery store cake (and eventually reveals her whole 'reality' is made up). The man Nat watches behave like a baby in diapers and his wife watch Michel and his nightie wearing Margot exchange sweet nothings via the Internet, critiquing what they see and we realize the couple is video blogging their entire existence. Margot freaks when she realizes their previous week's web traffic dropped by 24. Meanwhile, in an apartment complex, Nicole (Stéphanie Michelini) tells partner Khaled (Mohamed Rouabhi) she wishes to visit his parents in Germany. Eventually we learn that Nicole is the Nicolas Margot's mother inquired after - Margot's former husband and Nat's father. The transsexual is the most emotionally grounded character in the film. Nat wants to move in with Nicole but Khaled is against the idea. As family life implodes further (there's a truly horrific dinner party that Michel broadcasts live which includes Simon, the new boyfriend of Margot's friend Loren (Chloé Mons, "Read My Lips," "The Code"), who just happens to be the online baby man), Nat 'marries' Adrien in their videogame, then sets out to give him a virtual tour of her home that has unforeseen consequences (as well as a dead bunny). What Nat does not know is that Adrien is dying in a hospital room that his mother cannot bear to visit. Delphine Kreuter's debut explores Atom Egoyan themes with more technology and edits its output to today's attention deficit disorder levels. It's not a very nice looking film to watch with its maddening swishing camera and in your face visuals. But by the time Nat is dancing on the streets for the extreme pleasure of the boy she's never met, one realizes one's been emotionally pulled in to this sweet, sad romance in the midst of the messy adult lives around it. It's a film that intentionally offputs as the basis of its building blocks and it is very intelligently constructed, if abruptly ended. We've seen films before that use the equipment in characters' hands to tell their stories, but "57,000 Km." rises above gimmick for real emotional resonance.

This is a treatise on the state of human communication in the new millennium where people don’t even come face to face but will bare there souls to a faceless stranger across the internet. It says that love and friendship do not need physical presence, just a computer and network connection. The story of 14-year old Nat (Marie Burgun) and her unconventional home life is the center of the film, where her father and stepfather (that’s right, “Dad” was a he but now is a she) have opened their lives to the world wide web and a documentary crew. The family secrets are no longer a secret and Nat has to put up with it. A long-distance internet friendship she has with Adrien (Hadrien Bouvier), a teen boy isolated in his hospital room with an undisclosed, seemingly fatal disease, fills much of her time. The two play internet games and talk about things that teens talk about. The relationship between these two is the heart of the film. First-time director and writer Delphine Kreuter (with Emmanuel Finkiel and Mathieu Lis) goes a shaky camera/cinema verite route that, while I understand the desire to be fluid and unconventional, was distracting. I wanted to shout “USE A TRIPOD!” by the half way point but, fortunately, Nat and Adrien’s friendship smooths out the annoyance with the film technique.