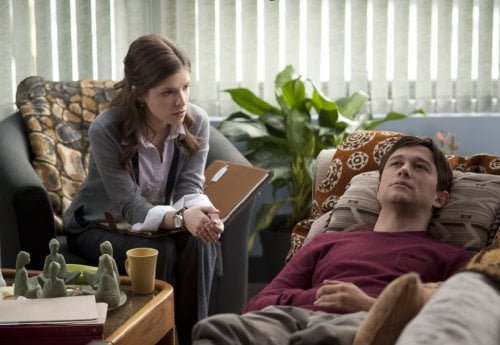 Adam Lerner (Joseph Gordon-Levitt) is in a good place. He's got a great job working for NPR with his best buddy Kyle (Seth Rogen). His hot artist girlfriend Rachael (Bryce Dallas Howard, "The Help") has recently moved into his bungalow. But his back's been bothering him, so he goes to get it checked out and leaves the hospital with astonishing news - the pain is being caused by a tumor growing on his spine, a rare form of cancer with survival odds of about "50/50."

Ripped from real life in more ways than one, "50/50" was written by Will Reiser after the twenty-seven year-old was diagnosed with the same rare cancer Adam has and after being pushed by friends like Seth Rogen to turn his tragedy into the stuff of comedy (Rogen's Kyle pushes Adam to use his cancer as the ultimate pickup line). Reiser's actual MRI and CAT scans are even used in the film. Director Jonathan Levine ("The Wackness") has come into his own with this material, perfectly modulating the movie's shifts among serious human connection, the reality of cancer treatment and the funny stuff. "50/50" is easily the year's best comedy. The film is related to the seven stages of grief, but after establishing Adam it is broken down into 'the news,' the treatment, the fallout and the results. Adam gets his shocking diagnosis from Dr. Ross (Andrew Airlie, "Apollo 18"), a physician whose bedside manner is entirely missing (Adam has to deduce what's being told to him by picking out the scariest sounding words streaming from Ross's chart reading). Then, before he's even got his head around it, he must tell his girlfriend, his workplace and lastly, his mom Diane (Anjelica Huston), a chronic worrier whom Adam mostly filters out and who has been dealing with the early onset Alzheimer's of his dad, Richard (Serge Houde, TV's 'The Kennedys'). As Ross cannot deal with emotional support, he sends Adam to a facility therapist. Katie (Anna Kendrick, "Up in the Air") is so young and awkward, Adam quickly figures out that he is her 'third patient ever,' so, ironically, he often ends up propping her up as much as she tries to help him. Rachael tries to act supportive, but she's clearly freaking out inside. She drops him off for his chemo appointments, but refuses to enter the hospital. She gets him a retired greyhound, Skeletor, perhaps the best thing she's ever done despite Adam's dubious acceptance. Kyle's dislike of her proves founded when her attempts at reconciliation turn out to be a cover for her own needs. Better support comes in the form of fellow patients Alan (Philip Baker Hall), who introduces Adam to the benefits of medicinal marijuana, and Mitch (Matt 'Max Headroom' Frewer), who delivers life lessons of another sort. This large cast of characters revolving around Adam and his illness not only offer different outlets for his and their needs but are each seen as individuals. That's the mark of terrific acting, great writing and skilled direction. Gordon-Levitt is one of the best indie actors out there and it's good to see him appearing in more commercial fare as he helps lift it from mediocrity. The actor's often a straight man for Rogen, but his reactions are priceless and his general response to Adam's condition is emotionally complex and physically subtle. Rogen's also terrific, as bluntly coarse as ever, but with true concern guiding, or misguiding, his words (there's a lovely revelation about Kyle near film's end, its discovery in his bathroom an indicator of the film's meld of humor and humanity). Kendrick's "Up in the Air" Oscar nomination was no fluke - she's just as good here - uncertain, caring, open and artless. Huston steals every scene she's in and even though he's mostly in the background, Houde is a poignant reminder of how quickly life can change. The cast is supported by their locations, Vancouver standing in for Seattle. Adam's neighborhood has a youthful, slightly Bohemian yet homey feel while work, modern hospital, art galleries and dingy clubs are the stuff of a smaller urban landscape. There's a nice contrast between city living and more natural settings. Michael Giacchino's ("Up," "Super 8") score just wraps up the whole package. "50/50" is a terrific film about a tough subject. It looks cancer in the face yet you'll leave the theater with a smile on yours.