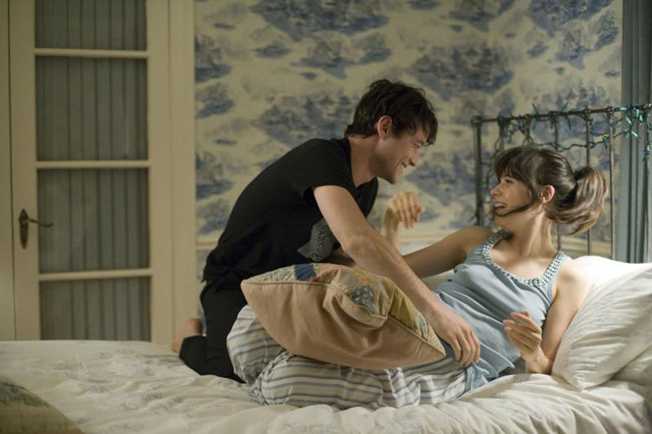 Tom (Joseph Gordon-Levitt, "The Lookout," "Stop-Loss") is one of the best and brightest at the New Hampshire Greeting Card company in L.A. but he is rendered speechless at the sight of his boss Vance's (Clark Gregg, "Choke," TV's "The New Adventures of Old Christine") new assistant. She's from the Midwest and says she does not want a relationship so Tom convinces himself that their arrangement is well and good as he sets off on "(500) Days of Summer."

Right off the bat we are told 'this is not a love story,' but it is, just one that turns convention on its head. In "(500) Days," it is the male character who is full of romantic yearning, who hears 'She's Like the Wind' every time he thinks of her, who loves to watch her sleep, who believes in the thunderbolt. Summer (Zooey Deschanel, "The Happening," "Yes Man"), a child of divorce, may like a lot of the same things as Tom does (The Smiths, Magritte, karaoke) but absolutely denies the idea of a soul mate and, while tantalizing, refuses to be pinned down. As seen from Tom's eyes, things seem to be going his way. After a drunken work outing, Tom's officemate McKenzie (Geoffrey Arend, "The Ringer," "Garden State") tells Summer that Tom likes her as he's being loaded into a taxi. Summer seems to like this information. Soon, they're playing house in Ikea, Tom is invited to Summer's apartment and they're having 'shower sex.' But the filmmakers' 'day counter,' which moves forward and backward in time, let us in on something - Tom isn't picking up on all the signs, like the way he's dismissed by Summer's eyes as he tries to woo her with a Ringo Starr album in a used record shop or her iciness when he's prodded into macho behavior by an aggressive suit butting in at a bar. The epitome of Tom's love euphoria is realized in an amusingly choreographed post-coital scene where, when Tom leaves Summer's, everyone on the street recognizes his mood and begins dancing in formation, eventually joined by a brass marching band and an animated blue bird (of happiness). Video director Marc Webb uses a grab bag of cinematic tricks ranging from animation to split screens to changing aspect ratios, but, strangely enough, they do not call undue attention to themselves, giving visual flavor to an already quirky story. But there are other aspects of the filmmaking that do not go down as easily. The New Hampshire Greeting Card company, its product and its culture are so dorkily retro they couldn't exist today. With the exception of Ikea, "(500) Days of Summer" is clearly anti product-placement, but its fantastical work place and non-existent grocery items pull us out of the film whereas the fantasy dance number does not. Then there is Summer's wardrobe, a dream of powder blue vintage pieces from the virginal 50's that doesn't seem to go with a woman who loves The Smiths. Accessorized with satin ribbons, hairbands and cute animal pins, it's all too precious and Katy Perry. Joseph Gordon-Levitt has shown impressive range transitioning from child TV star to adult movie actor and he's so likeable and engaging here that we want to see him happy, but like his best friend Paul (Matthew Gray Gubler, "The Great Buck Howard"), not with Summer. Zooey Deschanel always has a spacey alien sameness to her performances, but here she manages to exhibit a subtle undercurrent of bad news while appearing desirable on the surface. It's a tough role to play, because, in essence, Summer treats Tom really badly (something which Tom doesn't quite realize until a nifty split screen sequence titled 'Expectations' and 'Reality.' If Gordon-Levitt in love is uplifting, the jilted Gordon-Levitt makes his newly found cynicism amusing (on viewing a guy and a girl barely holding hands on the street he snarls 'Get a room.' In his bathrobe.) In supporting roles, Arend is frat guy funny in a totally cool way while Gubler is the best buddy voice-of-reason who makes his fiancee, Robin, seem like a real character although we never see or hear her. Tom's advice-dispensing little sister Rachel is refreshingly cast with Chloe Moretz ("The Eye") in the Abigail Breslin role. Webb and his production team give us a color version of the L.A. rediscovered in "In Search of a Midnight Kiss" last year and the soundtrack is essentially a mix tape of Tom and Summer's 'romance,' featuring songs from the Pixies' "Here Comes Your Man" to Hall & Oates' "You Make My Dreams Come True" to Deschanel's cover of Nancy Sinatra's "Sugar Town" to a Carla Bruni tune in French. "500 Days of Summer" ends on a meets cutesy note, but what comes before is a giddily original take on the sentiment that 'love is blind.'

Tom (Joseph Gordon-Levitt) is a natural-born romantic who knows, in his heart, that the “one” is out there somewhere. Summer (Zooey Deschanel) is a pragmatist and believes that true love is the stuff of fairy tales and nothing more. When they meet, Tom is convinced from the start that she is it but, for Summer, it is just another brief encounter in “(500) Days of Summer.” First time feature director Marc Webb, working with a script by Scott Neustadter and Michael H. Webber, has created a boy meets girl tale that is not a love story. Set during the titular 500 days, this non-linear story of two people – he a romantic, she a cynic – jumps back and forth through time to show the highs and lows that Tom feels as he desperately tries to get Summer to love him as he loves her. The result is a charming story that does not walk down the expected path. This imaginative study has more going for it than just the vicissitudes of a relationship. The jumps back and forth through time reveal Tom’s feelings for Summer. He natters on, early in the 500 days, to his much younger friend and muse, Rachel (Chloe Moritz), about his feelings for Summer. She warns him that Summer may not be the “one” but he is too smitten with her to listen. Time jumps ahead and Tom, fully in love, is devastated when Summer tells him that she is not ready for a committed relationship. This back and forth device is skillfully used to tell the whole story from its starry-eyed beginnings to the problems that happen when two people are not on the same romantic page. There is solid chemistry between Joseph Gordon-Levitt and Zooey Deschanel that makes this a yarn that is more reality-based than the usual romantic comedy. This is not a typical happily-ever-after tale (though you will love the ending) but one grounded in the lives of two people of very different minds. Gordon-Levitt is the focus of “(500) Days…” and the film is mostly from his emotional viewpoint. The actor gives his character, Tom, full dimension and we feel the turmoil within him as he experiences the highs and lows of love. Deschanel’s Summer is the object of Tom’s attention and, while not as emotionally volatile as he is, and plays off Gordon-Levitt well. The debut helmer gives the story life, utilizing clever ways to keep the film fresh and easy to watch and enjoy. When Tom finally gets it on with Summer, he leaves her apartment walking on clouds. This spawns a big scale musical dance number in an LA park to the Hall and Oates tune, “You Make My Dreams (Come True),” that is on par with a similar dance on the streets of Chicago in “Ferris Bueller’s Day Off.” The joy that Tom feels here is palpable from and amusingly staged. The use of faux Ingmar Bergman (and other) films, such as famous-playing-chess-with-death scene from “The Seventh Seal” with Tom doing the Max Von Sydow character and Rachel filling in for Death, is funny and a nice nod to us film buffs. The supporting players help flesh out the story with Geoffrey Arend, as Tom’s best friend McKenzie, and Matthew Gray Gubler, as Tom’s other best friend Paul, giving funny performances as they worry about their buddy. Clark Greg (from TV’s “The New Adventures of Old Christine”), as Tom and Summer’s boss at a greeting card company, gives a sympathetic turn toward the lovelorn Tom. “(500) Days of Summer” is an excellent date film aimed at those beyond the usual tweenie audience. This is a more mature cut at the romantic comedy genre populated with the likes of “Zack and Miri Make a Porno” and “Knocked Up.” The latter films are funny, but “(500)… has that plus a realistic, sometimes elated, sometime melancholy relationship between two likable people.