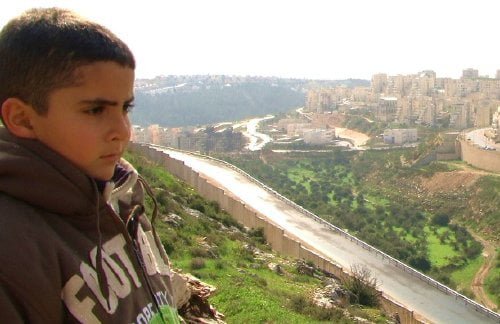 Emad Burnat is a Palestinian living in the tiny village of Bil’in on the West Bank near the border with Israeli land. He got his first camera when his fourth son, Gibreel, and he became obsessed video recording everything, including the non-violent demonstrations by the villagers against the encroaching barrier wall being built to separate the Palestinians from the Israeli settlers that are taking their land and their living and Emad ends up with “5 Broken Cameras.”

Palestinian Emad Burnat is a self-described felah, or peasant, living outside the town of Bil’in on the border of the West Bank. When his fourth son, Gibreel, is born, Emad gets his first video camera to record the boy. This purchase ends up making him Bil'in's unofficial cameraman, documenting all events of importance, so when Israeli settlers, including construction companies, begin to use nefarious means to encroach on the Palestinian lands, Emad gets into the thick of the resistance, filming escalating altercations through "5 Broken Cameras." Watching this video, edited together by a team who include footage from other cameras as the story progresses, I was reminded of the superb "Burma VJ." But this work, although it captures some extraordinary events, suffers from obvious story telling tropes, some amateurish attempts at allegory and irony and the feeling that some of what we are watching has been manufactured. Essentially, Emad's story has been messed with too much by the producers and codirector/writer Guy Davidi. Burnat and his friends and relatives partake in nonviolent protests, often turning their oppressors' tactics around on themselves. If Israeli settlers can claim land by placing a trailer on it, the Palestinians will put one on the outskirts of their town as a shield (it's removed by Israeli military). If Israeli concrete construction is above their own military law, the resistance will build with cinder blocks, etc. Emad is unafraid to get right into the midst of a struggle to get his footage (he says he feels 'protected' by his camera, but his cameras are repeatedly destroyed by Israeli weapons), even having that age-old debate about whether to keep on shooting or stop to step in and help when his aging parents try to stop the Israeli Jeep is arrested brother is being taken away in. The beginning of Emad's narration is spot on. He describes the historic differences the arrival of each of his sons marked, then talks about his current project as seeing history through Gibreel's eyes as we watch the young boy walk along the barbed wire 'wall' the Israelis erected. But then we are led to believe that the boys first words are for the bullet casings strewn around the area and it just feels scripted. A dear friend is interspersed throughout the film with such heavy foreshadowing, the filmmakers may as well have had a 'Martyr' balloon pointing at his head. When Emad shows Gibreel being bathed and notes his sensitive skin, we just know he will end talking about the thick one he must grow. When the man is badly injured and taken to a hospital in Tel Aviv, he tells us he can never do physical labor again and that because his videotaping isn't considered true resistance work, his bills will not be covered by the Palestinian Authority. He needs funding to continue his treatment. Here's a place for some ironic honesty, his resulting film perhaps an aid to that cause, but the heavy hand is replaced with avoidance even though it is all too easy to draw one's own conclusions. "5 Broken Cameras" has a more than worthy subject, but its raw power has been blunted by a post production team intent on drawing pretty parallels.