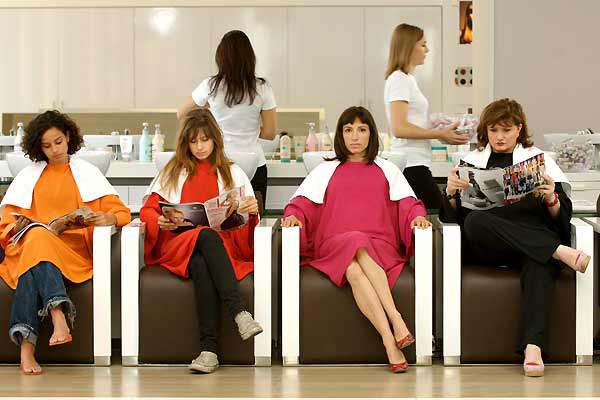 It is still a man’s world in France. Women work just as hard, or harder, at their jobs but the good-old-boy network keeps them from getting the top positions. A woman should take care of the home and children and leave the work to the men folk. Thus is the case for Bruno (Antoine de Caunes) and Marianne (Aura Atike) until she decides to take the bull by the horns and announces that she is leaving for Tokyo for her job. Bruno now has to take care of their two kids and his job, too, and realizes that he, like mothers everywhere, needs “48 Hours a Day.”

Catherine Castel's film is often too broad (the caveman credit sequence opening) and too obvious (the 'cute' denouement) and its two lead characters behavior is both reprehensible, yet it is just as often funny - often laugh out loud so. Aure Atika ("OSS 117: Cairo, Nest of Spies") is a harried, working wife who lies to her husband (Antoine de Caunes) about a business trip. Forced to deal with their two children, Bruno's career begins to slip, but in the end, the two learn what is important in life. It's a raucous French 'battle of the sexes' farce that feels dated in its one-sidedness, but a chuckle earned is a chuckle earned.

Nobody does farce like the French and freshman filmmaker Catherine Castel does her country justice with her oh-so-sophisticated comedy above love, work, marriage and family. Bruno, like the rest of his brethren, is used to working late, unpredictable hours and coming home to a hot meal, a loving wife and happy kids. For Marianne, though, it is a balancing act as she, every day, single-handedly care for their two kids and works hard at her mid-level job. She has grown tired of her second-class status, though, and invents the trip to Japan to teach Bruno a lesson in parenting. As is typical in a comedic farce, things do not go as planned for Marianne. She soon misses Bruno and the kids and begins to wonder if her plan will work, especially when she finds out that her husband has been remiss in his fatherly responsibilities. And, hired a pretty young au pair to take care of the kids while he is at work. But, Bruno is a quick learner and begins to get with the flow of parenthood and the joy of spending quality time with his children. Things heat up, though, when he accidentally sees Marianne going into an apartment building with another man! The farce notches up as their roles reverse and Bruno is the one to question Marianne’s fitness as a spouse and mother. Director Castel does a solid job in marshalling her large cast ­ friends and family abound around the little family ­ while delving into the real issues of the responsibility of both parents in raising their children. Aure Atika and Antoine de Caunes anchor the festivities as their lives change, for better or worse. The veteran supporting cast ­ Victoria Avril, Catherine Jacob, Aurore Clement and Yves Jacques among them ­ help give the story depth and Mathias Mlekuz is charming as the neighbor and client who falls for Marianne. I have not found a writing credit for “48 Hours…” but, except for the trite and predictable happily-ever-after ending, the story is imaginative and lively.