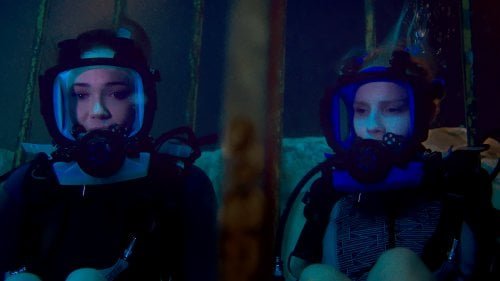 Vacationing in Mexico, Lisa (Mandy Moore, TV's 'This Is Us') and her sister Kate (Claire Holt, TV's 'The Vampire Diaries') are persuaded to try shark diving. The two are mesmerized by a group of Great Whites, but when the rickety cage that holds them breaks away from the boat, they have only one hour of air left and are "47 Meters Down."

The latest summer shark movie has been bouncing around for a while, now getting a theatrical release after last year's successful "The Shallows." The Blake Lively starrer may have fetishized the actress, but it looks deep in comparison to British filmmaker Johannes Roberts' ("The Other Side of the Door") underwater haunted house movie. We're immediately clued in to what we're in for when the opening credits reveal the underside of a pool float, a spilled cocktail turning the water blood red. On their first night in Mexico, Kate awakens to hear Lisa crying. Turns out Lisa didn't bring Kate along because her boyfriend had a business trip, but because he dumped her for being boring. Kate insists they're going out even though it's 1 a.m. After a night of dancing that ends on the beach at dawn, the two have partnered up with cute locals (Yani Gellman and Santiago Segura) who suggest the Great White encounter. Lisa's not into it until Kate suggests the pictures she will get wouldn't be the type posted by a bore. She's also assured by the boys that her lack of scuba certification won't be a problem (Kate has experience). At the end of a pier they meet Captain Taylor (Matthew Modine), assuring him they're both scuba certified. He powers them out to a bigger boat. It's a rust bucket and so is its shark cage, but seeing as how the filmmakers need to have the young women communicate from under water, they're outfitted with high tech masks complete with microphones (the tanks, on the other hand, barely have any paint left on them). Lisa's concerns about not booking through their hotel look mighty valid and even Kate questions the legality of chumming to draw Great Whites. As a twenty footer heads in, the boys take the first dip. With warnings about checking air consumption, Kate and Lisa go next, Kate giddy by what she's seeing, but when they drop a bit she panics, insisting they come back up. Then disaster strikes. Simply put, "47 Meters Down" is a jump scare movie that frequently defies logic. The camera closes tightly on the faces of Moore and Holt, darkness obscuring what's lying in wait, flashlights and flares suddenly illuminating gaping, toothy maws mere feet away. Communications lost with Taylor at their depth, Kate's forced to leave the cage to advise Taylor who repeatedly tells them (us) that they cannot make a dash for the surface because they'd suffer the bends. Roberts even resorts to repeating his initial scare setup, because hey, if it worked once, why not twice? The inexperienced Kate is suddenly capable of doing things that might rattle an experienced diver. A late breaking twist is ludicrous, only to be revealed as a twist-within-a-twist that doesn't pass the smell test. Moore and Holt are to be commended for delivering emotional beats under grueling conditions, but "47 Meters Down" is more amusement park haunted house than movie. Grade: