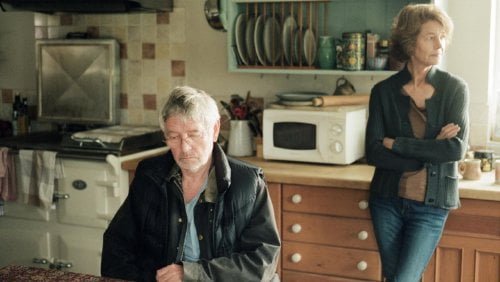 A week before their anniversary party, Geoff Mercer (Tom Courtenay) receives notification that the body of his former girlfriend who was lost fifty years prior during a Swiss hiking trip has appeared in the breakup of a glacier. He's been requested to make identification. His wife, Kate (Charlotte Rampling), is stunned, never having even known about the woman all throughout her and Geoff's "45 Years."

Writer/director Andrew Haigh's last film explored the initial stages of two young men's attraction turning into something deeper in "Weekend." Now, adapting David Constantine's short story 'In Another Country,' the filmmaker turns his perceptive gaze on a long term, solid middle class marriage shaken to its foundation by doubts introduced by the past. The film is far from the explosive melodrama it might have been had its protagonists been American, Haigh instead relying on his veteran actors to subtly convey their feelings (or lack of them) during the course of day to day routines. Yet there is also an underlying tone of foreboding (just why was their party delayed five years?). The one explosive moment occurs in the movie's last shot and it's all contained in Rampling's eyes. We're introduced to a couple well set in their ways. Kate's the earlier riser, taking their dog for a walk along country lanes, returning to join Geoff for breakfast. The couple is clearly happy, communicating in shorthand, comfortably joking around. Then that letter sends Geoff into a nostalgic reverie (his immediate use of 'My Katya' is like a knife to the heart). 'She looks like she did in 1962,' he tells Kate, informing her that Swiss officials have asked if he can fly over to identify the body. Kate's surprised he'd even consider this option, then further taken aback when he tells her he was listed as Katya's next of kin as they'd posed as a married couple (she wore a ring made of oak, but 'it wasn't real'). He's largely dismissive of the idea of making the journey, but we - and Kate - can see he's turning the idea around in his head, just as Kate's words about it being silly to be jealous of someone in Geoff's past before her contradict her heart. Over the ensuing days, we follow Kate as she discusses final preparations with her best friend Lena (Geraldine James, 2011's "The Girl with the Dragon Tattoo"), but she's clearly distracted, noting changes in Geoff's behavior. The man who never walked is suddenly on the move. Finding herself home alone, Kate makes a trip to the attic, ostensibly looking for photos for the upcoming party, instead indulging her fears and finding something to substantiate them. On Friday, she finds a note saying Geoff's taken the bus into town. She drives in, considers a watch in a shop window, but was the travel agency her real destination all along? He surprises her again with an attempt at lovemaking that evening. Saturday morning finds him reenergized and solicitous. A fine party awaits full of friends to fete the happy couple. Haigh's production is as quiet as his dialogue. There is nothing showy in the cinematography or locales, everything muted, an expression of the Mercers' contented lifestyle. Instead his soundtrack of sixties standards - 'Young Girl,' 'Happy Together,' 'Smoke Gets in Your Eyes' - fills in the gaps with words that may be thought but not spoken. Haigh has fashioned his film as a setting for his two stars. The story of a marriage is the foundation, but it is Courtenay's unintentionally insensitive matter-of-factness and Rampling's cautious yet devastated reevaluations that bring the house down. Grade: