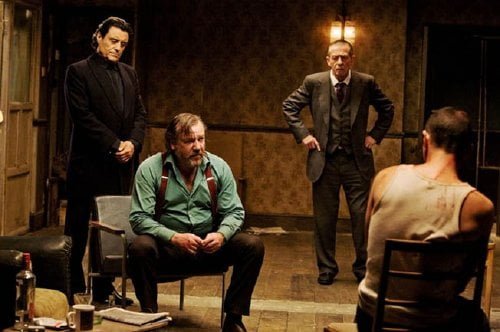 Colin Diamond (Ray Winstone) is nearly crippled with grief when his wife, Liz (Joanne Whalley), announces that she “met someone else” and is leaving him. His best friends rally around to support and help their buddy when he decides that he wants to get the bastard who cuckolded him and make him pay. Things do not turn out as planned by Colin, though, in “44 Inch Chest.”

Colin Diamond (Ray Winstone, "Sexy Beast," "Edge of Darkness") is devastated when his wife, Liz (Joanne Whalley, "Scandal," working mostly in TV since 1997's "The Man Who Knew Too Little"), tells him she's found someone else after twenty-one years of marriage. Colin's gangster buddies gather with the guy in question for some violent retribution in "44 Inch Chest." This little indie is being touted as from the creators of "Sexy Beast," which would be the screenwriting team of Louis Mellis & David Scinto who know their way around some delicious dialogue. Still, their story this time around trails off without "Sexy Beast's" exciting finale and fledgling director Malcolm Venville doesn't have Jonathan Glazer's visual style nor his sense of timing. Fantastical elements of the story are so poorly executed, one is left wondering how certain characters have suddenly popped up and whether the entire film wasn't a figment of Colin's imagination. Venville does open with a great shot of Winstone which implies one thing and delivers another. Then he begins to fold in other members of Colin's 'gang' (it is never clarified just what this bunch does, although it is clearly nefarious) beginning with Archie (Tom Wilkinson, "In the Bedroom," "Michael Clayton"), the one Colin turns to, first established as living with and caring for 'mum,' then running into Biggie Walpole (Andy de la Tour, "The Bride," 2005's "Oliver Twist"), a man who insists Archie address his dog Reggie directly (he answers for him). But instead of continuing this pace, Venville throws the whole gang at us in an old abandoned London warehouse that feels like the stage this piece is bound in. As the story progresses, we get one more irrelevant side story (from Ian McShane's (HBO's "Deadwood," "Death Race") Meredith), flashbacks to what happened between Colin and Liz the night before and a few hallucinatory fantasies that do not work at all. The dream cast does not disappoint, with Winstone leading the charge as yet another man mad for romance yet capable of brutality. As the group's elder and presumable leader, John Hurt ("Hellboy," "The Limits of Control") sucks on his dentures while delivery great Cockney cadences. McShane's Meredith is suave and unapologetically homosexual, something which rankles Hurt's Peanut to no end. As with Ben Kingsley's "Beast" Ben Logan, the writers repeat and echo dialogue, this time amongst the characters, giving the feel of a British David Mamet play. The cast is rounded out by Stephen Dillane ("The Hours," HBO's "John Adams") as Mal, the groups youngest and most handsome member who suspicion turns to when he gets a little too close to light Liz's cigarette and by Melvil Poupaud ("Broken English," "A Christmas Tale") who has no lines at all as Liz's Loverboy. And that cigarette lighting for Liz? A fantasy element that has her appear among the men and hold her own. Venville does some weird things, like superimpose Hurt's face on Whalley's body, or envision her as a wanton manor dweller who licks the panes of a window while contemplating her chauffeur (alternately McShane and Dillane) and these elements land in the film with a thud. "44 Inch Chest" is an exploration of the meaning of love amidst a lot of macho posturing that features a great cast and great dialogue undone by staginess, clunky fantasy elements and a weak conclusion.

This is a David Mamet-like film that has the same stagy feel as that writer-director’s well know works, such as “Glen Gary, Glen Ross.” “44 Inch Chest” is not up to the latter film’s standard, though, except that it, too, has an all-star cast led by Ray Winstone as the troubled, angry, revenge-seeking Colin. Surrounding Colin is a bevy of colorful characters with Tom Wilkinson as Archie, his closest friend, Ian McShane as openly gay Meredith, Mal (Stephen Dillane), who harbors a secret about Liz and Old Man Peanut (John Hurt), the curmudgeon and most senior of this band of brothers. Essentially shot in just one room, “44 Inch Chest” has the look and feel of a stage play turned into feature film. As such, there is little action and mostly talk – lots of talk. Each character gets his soliloquy (with the F-word liberally sprinkled through most) and Colin gets to rant and rage over his plight. It is mostly all serious and somber, however, Ian McShane plays his Meredith with such drollness that he turns tense scenes into comedy, breaking up the relentlessness of Colin’s revenge plans. This is an actor’s film and we have a great deal of talent up on the screen. The veteran, expert cast overshadows the story but each is a pleasure to watch. Winstone is pretty two dimensional as Colin with his unrelenting fierce sadness. McShane, as I said, provides the needed comic relief. At 72, John Hurt still has it as he chews up scenery as O. M. Peanut. Tom Wilkinson’s Archie is the most sympathetic of the group and the voice of reason. Stephen Dillane’s Mal is the only character to veer off the initially set course the others follow. Joanne Whalley is intense as Liz and that intensity sometimes sizzles. The writers, Louis Mellis and David Scinto, give them sometimes-amusing dialog done in wordy monologue, with every word and syllable given portentous weight. Winstone and McShane also appeared in Jonathan Glazier fine 2000 film, “Sexy Beast,” also penned by Mellis and Scinto, but first time helmer Malcolm Venville lacks the directing chops to make better use of his terrific cast. “44 Inch Chest” is more a calling card than a debut.