42: The True Story of an American Legend 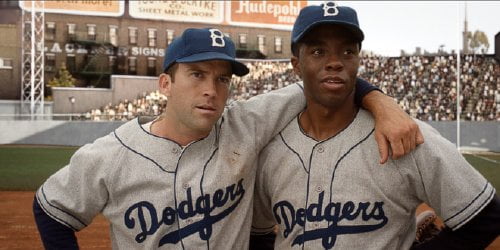 In 1947, Brooklyn Dodgers GM Branch Rickey (Harrison Ford) made history by signing Major League Baseball's first African American player, Jackie Robinson (Chadwick Boseman). He and his player faced opposition from the media, fans, players and other teams, but Robinson never looked for revenge, only great baseball and boy did he deliver. So much so, that the Hall of Famer remains the only sports figure whose number was universally retired except on April 15, when every player wears "42"

Here we go again - a white star is attached to a vehicle about a black hero and although we glean nothing of his personal life, the story is every bit as much Rickey's as it is Robinson's. But in this case, it feels right as Rickey's lesser known story, a literal picture of white guilt bred of decency and expunged with guts, deserves to be told and in no way overshadows Robinson's. Writer/director Brian Helgeland ("A Knight's Tale") has crafted a good, old-fashioned biopic that feel fresh with its ensemble of up-and-coming actors, character players and industry vets. The film opens with historical archive footage which brings us up to date on the state of the U.S. immediately following WWII, highlighting the noxious Jim Crow laws still in effect when black fighting men came home. It's 1945 and Branch Rickey has an agenda - he wants to sign a black player to his team. A young man with impressive stats playing for the Kansas City Monarchs fits the bill and Dodger's coach Clyde Sukeforth (Toby Huss, "God Bless America") invites him to Brooklyn. The young ballplayer is suitably awestruck, but taken aback when Rickey begins to bait him. Rickey's looking for a precise balance, a player 'with the guts to *not* fight back.' He's invited to join spring training for Brooklyn's farm team, the Montreal Royals. Buoyed with the news, Jackie calls his college sweetheart Rachel (Nicole Beharie, "Shame") and asks her to marry him. But trouble begins soon enough. The Robinsons are bumped from their flight to Florida after Rachel uses a 'Whites Only' ladies room, then they're literally run out of town. Jackie's boo'ed by exhibition game audiences and led off the field by a Southern law officer. Many of the Dodgers, led by pitcher Kirby Higbe (Brad Beyer), sign a petition to keep Jackie off their team and Dixie Walker (Ryan Merriman, TV's 'Pretty Little Liars') asks to be traded. Throughout it all, Robinson exudes grace under pressure and phenomenal accomplishments on the field, despite prejudiced calls and attacks both physical and verbal. A turning point comes when Robinson endures a barrage of racist baiting from Phillie's Coach Ben Chapman (Alan Tudyk, TV's 'Suburgatory'). Knowing that his teammate cannot respond, Eddie Stanky (Jesse Luken, TV's 'Justified') clambers out of the dugout to give his former colleague a piece of his mind. Later, in Cincinnati, Pee Wee Reese (Lucas Black, "Friday Night Lights"), whose family in nearby Kentucky had sent him many disparaging letters for playing with a black man, walks onto the field and puts his shoulder around Robinson to 'show them who he is' (a Brooklyn statue immortalizes this moment). We also see the beleaguered Rickey, first being dealt a blow when the commissioner of baseball suspends his manager, Leo Durocher (Christopher Meloni, TV's 'Law & Order: Special Victims Unit'), for a year because of moral complaints by the Catholic Youth Organization just as the season is about to begin. (Durocher was known for, among other things, the line 'Nice guys finish last.'). Then the GM must do battle against associates who don't want 42 on their diamond while laying down the law within his own club and keeping Robinson's morale up. We eventually learn he is haunted by not having done enough to help a black college player realize his potential, a failure which marred his love of baseball. Robinson's story is also paralleled with sports writer Wendell Smith's (Andre Holland, "Bride Wars"), a black journalist forced to write his copy with a typewriter perched on his knees in the stands because he's not allowed in the white press box. The relatively unknown Chadwick Boseman gives Robinson a quiet dignity. We can see rage and hurt in his eyes, but he rarely gives vent to them and can also apply humor to the injustices thrown at him, especially alone with his wife He and Beharie forge a true and loving partnership with a delightful playfulness. Ford, sporting a low, just-shy-of-gravelly rumble, provides most of the film's laughs with his religious quips and colorful putdowns. The actor paints Rickey as a shrewd yet compassionate businessman with a true love of America's sport. Aces among support is John C. McGinley (TV's 'Scrubs') who provides dry, folksy commentary as Dodger's announcer Red Barber. Max Gail (TV's 'Barney Miller') adds an unconventional note as Burt Shotton, the retiree who stepped in to act as manager during the Dodger's tumultuous year. Helgeland limits his story to only two years, taking us through Robinson's Pennant clinching home run, with end title cards supplying future achievements (and comeuppances for those deemed deserving). He often uses broad strokes, but there are few glaring cliches here. Sure there's the 'token' young fan (Dusan Brown) representing what Jackie meant to young Black kids (and revealed as a future MBL player over closing credits), and the big, final game is crosscut to Rachel walking the streets of Brooklyn as neighbors listen on radio, but the film has warmth, a genuine love of its subject shining through.