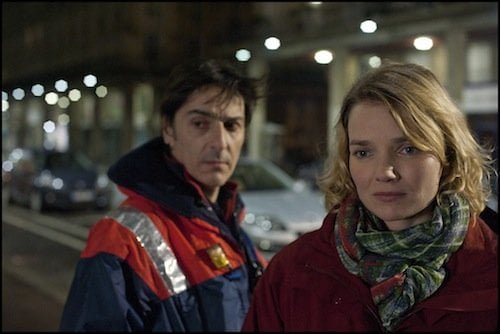 A young woman is brutally stabbed and murdered in the wee hours of the morning in a residential area of Le Havre. Police arrive and start canvassing the neighborhood but everyone claims they heard or saw nothing. One neighbor, Pierre Morvand (Yvan Attal), avoids talking to the police, harboring a secret as one of “38 Witnesses.”

Louise Fonteney (Sophie Quinton, "Nobody Else But You") returns home to Le Havre from a business trip to be met by a neighbor and told of the murder of another tenant the night before. Soon after, she receives a visit from Cpt. Léonard (François Feroleto), wishing to know if her fiance was home the night before. Pierre Morvand (Yvan Attal, "Rapt"), a port pilot, lies to Louise about his whereabouts, claiming to have heard or seen nothing, but he is only one to do so of "38 Witnesses." Director Lucas Belvaux turns to another true crime story, the 1964 murder of Kitty Genovese in Queens, for a fictionalized retelling, but unlike "Rapt," which offered a unique and tantalizing point of view, "38 Witness" is a blank slate. Technically, the film is well crafted, with arty shots of the working port of Le Havre and a modernized "Rear Window" like design for the apartment building facing the murder scene, but even actor Yvan Attal offers little to latch onto. The Kitty Genovese story was a horrifying profile of 'bystander' psychology, even having a syndrome named after her. According to a New York Times article, 38 people heard or saw and heard the woman being brutally murdered, but no one did a thing. Everyone expected that someone else made the phone call. Belvaux takes this premise and spins it into some kind of weird conspiracy theory where Pierre, when he finally gives a statement to police, is treated as a traitor. He hints at some interesting phenomena, like the way bystanders who shunned responsibility to a stranger in serious trouble nonetheless wholeheartedly took part in the rites of mourning her passing, but doesn't follow through on them. Undue emphasis is placed on how Pierre's inaction strains his and Louise's romantic relationship. In addition to the film's quality production design, there is interest to be found with supporting subplots. Sylvie Loriot (Nicole Garcia, "Mon oncle d'Amérique") is the journalist whose work parallels that of the police, but whose role gives her further reach among the distrustful and seemingly uninvolved. Also of note is the D.A. (Didier Sandre, "Autumn Tale") who must decide whether to prosecute 38 individuals for doing nothing - his reasoning with Loriot may be the film's high point. Belvaux uses a reenactment of the crime as his climax and initially it is chilling. However, the longer it goes all, the more exploitative it begins to feel. His final scene is underwhelming to the 9th degree, just as the lead actors in it.

Based on the Kitty Genovese murder in Queens, New York in 1964, Belgian filmmaker Lucas Belvaux moves the story of a young woman’s murder to Le Havre, France and makes it a modern day parable of public indifference to individual suffering. With its titular number of witnesses, numerous investigating police and one innocent by-stander, Louise (Sophie Quinton) - Pierre’s girlfriend who returns from a business trip the morning after the grisly murder – there is a lot going on in many different directions. The film is dark in both mood and look with the feeling that most of the story takes place at night. This darkness reflects the fear and suffering of the victim, Sabine Martel, and the lack of compassion of the title observers of the heinous crime. It is not a happily-ever-after story with its grim subjects of hate, fear and onlooker apathy.