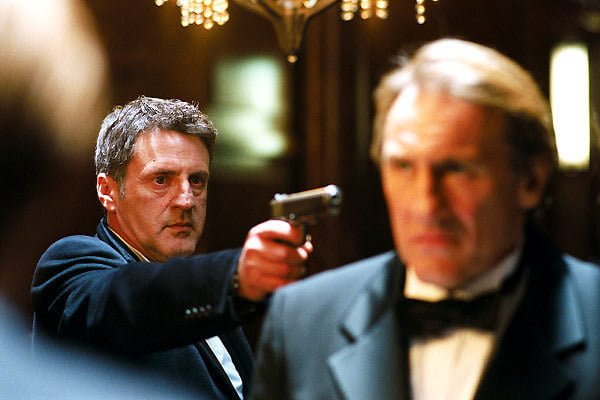 When CID chief Robert Mancini (André Dussollier, "A Very Long Engagement") announces his retirement, he makes it clear to BRI head Léo Vrinks (Daniel Auteuil, "The Closet," "Apres Vous") that he is his favored successor. Rival BRB head Denis Klein (Gérard Depardieu, "The Closet") is viewed as a bureaucratic ladder climber and little liked by Vrinks men, but Léo has strange and long held ties to his old colleague. The capture of a brash heist group known as the van gang is made top priority by Mancini's superiors, with whoever brings them down all but assured of the chief's post. Vrinks quickly assumes the lead, but the black compromise he was forced to make is sniffed out by Klein and the two men drag each other to the lowest depths in pursuit of the head office at "36 Quai des Orfèvres."

A string of murderous armored car robberies have plagued the Paris police for 18 months. Two ranking cops, Leo Vrinks (Daniel Autiel) and Denis Klein (Gerard Depardieu), are ordered to find the gang of deadly hijackers and the carrot of promotion to Chief is dangled before the two men. This temptation causes the lines to blur between right and wrong in “36th Precinct.” This taut 2004 police thriller is the second work by real life cop-turned-actor-director Olivier Marchal and, with his veteran stars, Auteil and Depardieu, creates a fast-building crime drama that keeps you guessing just who the bad guy (or guys) is. It explores the underbelly of police corruption where twisting the rules may be illegal for the average citizen but is OK for the cops. It is a violent and bloody film with the action done in your face, making “36th Precinct” another fine entry in the pantheon of the best of French crime cinema. The DVD set lacks a commentary track – one with Marchal, Autiel and Depardieu could have been a great way to hear about the film while watching the drama. However, the extras that are included are first rate. The “Making of…” feature gives a wealth of behind-the-scenes coverage, including an interview with the director; a things-go-wrong chapter where the stunt bullies fail during a crucial scene; deleted scenes that show the ends filmmakers will go to shoot a complex action piece only to eliminate it from the finished work. My only complaint is that it should have been letter boxed. The TV aspect ratio cuts off the lower half of the subtitles. The “Weapons Selection” extra is a gun lovers dream with the film’s weapons consultants breaking out all sorts of assault rifles, pistols and submachine guns for the actors to try out. This extra is really for gun nuts only. Luckily, I am one. In an extended interview with the director, Marchal talks about his life as a cop; his transition to acting and directing; the veracity of his action scenes – Marchal says the big shoot out in the film is based on real events. Sympathetically, he says, of his femme actors, that “the women were the only ray of light in the film.” There is a “Wardrobe Run Through” piece that has the costume designers meeting and greeting the film’s stars and outfitting them for the each of the scenes. Then, they are off to the hairdressers and makeup artists – all of this with director Marchal omnipresent throughout, guiding the process to his satisfaction. Finally, there is the theatrical trailer and a 30 second teaser to round things out.