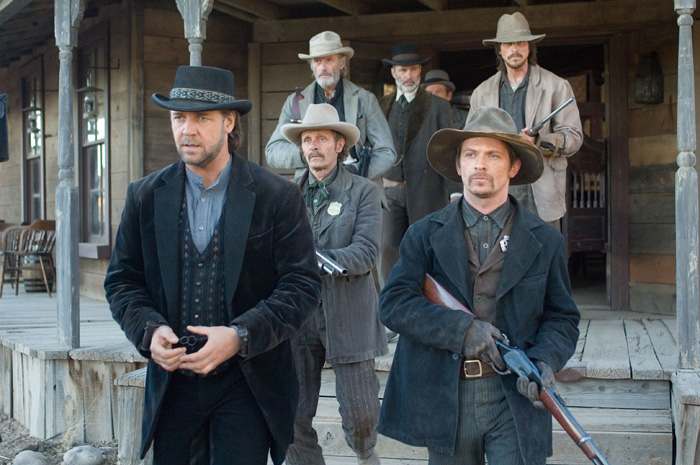 Rancher Dan Evans (Christian Bale) is desperate. Plagued by drought, he defaulted on his mortgage, the railroad company wants his land (burning his barn down to make that point) and he fears that his wife and boys will go hungry and homeless. When big-time outlaw, Ben Wade (Russell Crowe), gets himself captured at a nearby town, Dan volunteers, for $200, to escort the master criminal to catch the “3:10 to Yuma.”

Director James Mangold re-imagines the Elmore Leonard short story that was the source material for the 1957 western classic of the same name. The original is a kinder and much gentler story of a man (Van Heflin) who takes on the risky job of escorting the dangerous outlaw leader (Glenn Ford) to the train that will take him to prison in Yuma, Arizona. That film, directed by Delmer Daves, is a hopeful tome that there is good in everyone, even a hardened criminal like Ben Wade. The new version of Leonard’s western tale is a more violent and complicated telling of this tale of one man’s mission to bring another to justice. Christian Bale plays the former US Army sharpshooter who lost his leg in battle and is having a tough time making a go of his cattle ranch. He and his sons, Wiiliam (Logan Lerman) and Mark (Benjamin Petry), witness the murderous assault on a heavily armed and armored stage containing the railroad payroll. Ben Wade spots Dan and his sons but does not kill the witnesses. Instead, he takes their horse to keep them from telling the authorities of the robbery and killing before the gang makes their escape. Ben and his men head toward the nearby town of Bisbee and, posing as simple cowhands, tell the town sheriff of the incident. Sheriff and posse rush to the scene of the crime while the Wade gang hoists a few at the local bar. The gang disperses but Ben stays behind to dally with barmaid Emmy (Vinessa Shaw). Dan arrives on the scene and distracts Ben by demanding that he pay him and his boys for their inconvenience, allowing the returned sheriff to arrest the notorious outlaw. The owner of the stage line offers $200 to any man willing to take Wade to the town of Contention and the train to Yuma prison. Dan takes the offer. James Mangold’s version of “3:10 to Yuma” is definitely a new millennium cut at the Elmore Leonard western tale. As such, the film is far more bloody and brutal than the ’57 original, appealing to the video game generation that desires more and more graphic violence on the big screen. And, yes, there is violent death galore as Dan tries to protect his ward from vengeful townsfolk and keep Wade from being freed by his gang, led by his right hand henchman, Charlie Prince (Ben Stone) (reprising the role better played by Richard Jaeckel in the original). The result is a bombastic series of shootouts and harrowing horse chases that is less a psychological western thriller than its predecessor is. Christian Bale and Russell Crowe fill the shoes of their characters well enough. Bale does not have the quiet dignity conveyed by Van Heflin. However, Crowe makes the role of Ben Wade his own with his cool, unflappable demeanor and cocky assurance that he will most certainly escape conviction and hanging. His is a leaner, meaner version of Wade but still has the same likable quality that Glenn Ford gave the role. The production credits for “3:10 to Yuma” are first rate across the board. A big budget and the box office draw of its stars make for an action packed actioner that adds 20 minutes run time to the original tale. The shootouts are impressively staged with lots of lead being thrown and a constantly mounting body count. I prefer the subtlety of the Daves film (and watched it again both before and after seeing the remake) but the fast-pace and bloody action of the new version will attract big audiences, especially in the younger demographics. I encourage those that go to see the new “3:10 to Yuma” to seek out the original on cable/satellite TV or on DVD rental (it is available). Although both tell the same story, each is done with its own sense of style. I rate the ’57 work more highly but I was not disappointed by Mangold’s remake.