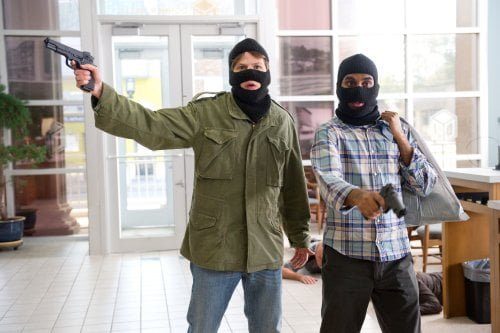 In Grand Rapids, MI, pizza delivery guy Nick (Jesse Eisenberg, "The Social Network") finds himself on the outs with his best friend Chet (Aziz Ansari, TV's 'Parks and Recreation') when he tells him he slept with his twin sister on high school graduation night eight years earlier. Across town, Dwayne (Danny McBride, "Your Highness") is tired of of not being fed from a silver spoon by his dad, a Marine Corps Major (Fred Ward, "The Right Stuff," "Tremors") who retired on a $10 million lottery win. Juicy (Bianca Kajlich, TV's 'Rules of Engagement'), a local stripper, plants an idea in Dwayne's ear and the next thing Nick knows, he's a walking bomb, tasked with robbing a bank to pay for a hit on Dwayne's dad in "30 Minutes or Less."

Do not be fooled into thinking "30 Minutes or Less" comes from the same loopy sensibility as star Eisenberg and director Ruben Fleischer's "Zombieland." It is not. Written by first timer Michael Diliberti, who tastelessly based his idea on a real life event which ended in tragedy , the film has its moments, mostly due to Eisenberg and Ansari's amusing antics, but it plays like a low rent "Pineapple Express" without all the bong hits. Diliberti puts three couples in overlapping orbits. Besides Nick and school teacher Chet, there are Dwayne and his best friend Travis (Nick Swardson, TV's 'Reno 911!,' "Just Go With It"), an idiot who nonetheless knows how to create a bomb vest from the Internet. Then there is Juicy and her 'hit man' Chango (Michael Peña, "World Trade Center," "Everything Must Go") who, unbeknownst to Dwayne, is her boyfriend (Juicy has insinuated she will forever polish Wayne's knob should he inherit the Major's fortune). The Major is the story's action irritant while Chet's twin Kate (Dilshad Vadsaria, TV's 'Greek') is the emotional one. Eisenberg, who this critic firmly believes deserved last year's Best Actor Oscar, is proving himself adept in many genres, rather remarkable for a young man who cannot hide his intelligence and who lacks conventional movie star looks. He's already done the coming of age tale, drama writ large and small, action-horror-comedy, romance and even voiced an animated parrot earlier this year. He's always a welcome screen presence, although here loyalty to a filmmaker seems to have won out over judgement of material. Still, he exhibits great chemistry with Ansari, wooing him back outside his classroom (Ansari's profession all for a bring a bomb to school gag), purchasing bank robbing kits at the Family Dollar and pulling off the heist itself. Ansari may actually be the funnier of the duo, but Eisenberg has to hit more notes. However, McBride is an acquired taste and there is little to like in his performance here other than oversized entitlement and bravado. Swardson at least gains sympathy as the underdog and a few snickers for utter cluelessness and good physical comedy chops. Kajlich and Vadsaria are mere window dressing, but Peña is proving his comic sensibilities of late and does so again here as the hit man who hasn't been given the big picture. The film doesn't go much deeper than paralleling Nick's race to deliver his pizzas on time with his more lethal ten hour countdown and although Fleischer stages his action and paces his film well, his film races to nowhere. Chet's more ambitious career trajectory turns out to be as meaningless as Nick's slackerdom, an unseen heroic move defies logic and the fate of the focus of all the mayhem is left hanging. "30 Minutes or Less" is a mediocre action comedy that is sure to play a lot better on cable than the big screen.